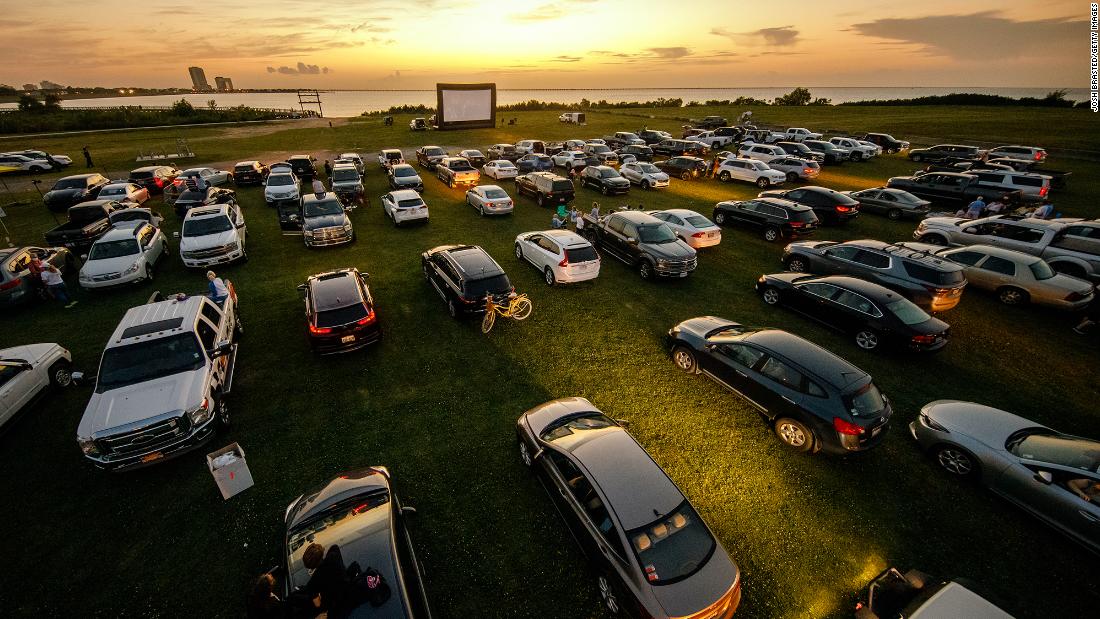 Last year, from late-March through mid-August, drive-ins generated 85% of North American box office revenue (and some weeks contributed north of 95%), according to Comscore data provided to CNN Business. During that same period in 2019, drive-ins accounted for just 2.9% of box office revenue.

“Naturally, the attributes of the multiplex did not work well within the confines of the pandemic, but consumers hungry to get out of the house found the drive-in to be the perfect solution to a question that no one had even thought to ask just a year before,” said Paul Dergarabedian, senior media analyst for Comscore, which tracks global box office data.

“The old-fashioned and often marginalized drive-in theater must now be recognized as one of the saviors of the [cinema] industry,” he said.

There are indications that the added exposure jumpstarted an outdoor cinema rally: Long-forsaken drive-ins are being dusted off and spruced up; pop-ups are proliferating in cities; the concept is gaining momentum overseas; and new takes on the classic are launching.

In 1958, drive-ins topped out at more than 4,000 locations nationwide, according to Kerry Segrave’s chronicle of the industry, “Drive-in Theaters: A History from Their Inception in 1933.”

Those ranks were culled following the emergence of television and, later, the arrival of cable, VHS, the cinema multiplex, digital innovation and rising land values.

Now, fewer than 350 fixed-screen drive-in locations are sprinkled across America, mostly in rural communities where land is in greater abundance and light pollution is minimal.

Prior to last year, those highly seasonal outdoor outfits contributed a mere sliver of the movie exhibition business.

In 2019, during peak summer months, drive-ins accounted for fewer than 6% of all theaters in North America and about 4% of overall box office returns, Comscore data show.

The pandemic flipped the script. For June through August 2020, about 21% of North American movie theaters in operation were drive-ins, and those fixed-screen outdoor cinemas had 70% of the box office revenue.

Indoor spaces and public gatherings became ill-suited for the preservation of health and safety against the deadly coronavirus. However, the open-air drive-ins with built-in physical distancing from vehicles had more favorable attributes.

“The world has become attuned to drive-ins in a way it hasn’t in decades,” said Ross Melnick, an associate professor in the University of California — Santa Barbara’s Department of Film and Media Studies.

Being able to maintain physical distance from others while enjoying a favorite movie in the comfort of a car was an experience Lallky would like to repeat.

“I hope that they would put a permanent drive-in option close to me,” he said. “It’s something different.”

Entering 2020, the drive-in industry had reached a point of equilibrium, said Nick Hensgen, owner of driveinmovie.com, which tracks and maps drive-ins of the present and past.
The drive-ins that remained were popular, well-maintained and successfully adapted to the digital transition, he said. He added that one or two drive-ins were expected to open in 2020, which would make for a very good year in a business that’s seen its numbers shrink to about 305 in 2019 from 499 in 1999, according to the United Drive-In Theatre Owners Association.

Ten ultimately did open last year, at least nine more have opened so far this year, and several more are in the works, he said.

In Loudon County, Tennessee, a new arrival features a modern twist that its operator hopes could serve as the future of the concept.

The centerpiece of the LoCo Drive-In is a 35-by-63-foot Samsung video board, a jumbotron with the capabilities of allowing for both daytime and nighttime showings of movies, live sports and other events.

“It’s an idea I’ve had in my head for 25 years,” Gordon Whitener, owner of Loudon Entertainment LLC, said in an interview with CNN Business. “While [the Covid-19 pandemic] didn’t drive it, it certainly motivated me to get on with it.”

His plan is to erect more of the video board drive-ins across the country — perhaps another 10 to 15 in the next five to 10 years.

In Oklahoma’s Green Country, efforts are in the works to resurrect the Tee Pee Drive-In, a long-abandoned drive-in located along an Ozark Trail section of US Route 66.
The Kante Group, a business connected to SeneGence International CEO Joni Rogers-Kante, purchased the property earlier this year, the Sapulpa Times reported.
The plans are to create an outdoor entertainment venue, featuring a drive-in theater, concert stage, food trucks, and short-term rentals, according to Sapulpa Times’ coverage of city planning commission proceedings.

“Drive-ins will see a slight resurgence, as small opportunities will arise for people to open them and offer them as movie options again, but not on a huge scale,” he said via email, adding that brick-and-mortar theaters will adapt as well. “But on the other side of the equation is the investment so many have made in subscriptions to premium channels offering up first-run movies. If the industry continues to run down that path, theaters will have a hard time competing.”

Tamara Charm, a McKinsey & Company senior expert and co-author of the B2C Sentiment Surveys, said 75% of consumers surveyed by her organization said they expect their pandemic-level online streaming spending to continue even past the pandemic.
The activity in 2020 has been a tough act to follow for many drive-ins, said filmmaker April Wright, who directed the documentary, “Going Attractions: The Definitive Story of the American Drive-in Movie.”

Now, in the second summer of pandemic, fixed-screen drive-in operators are facing a host of challenges, notably a lack of films from studios; competition from other attractions and digital streaming; gummed up supply chains; hiring challenges; and unruly customers, she said.

“I think there was certainly a level of difficulty to run a drive-in and keep a drive-in going in this day and age,” she said. “When you start adding all these complications and levels of difficulties, [drive-in operators] are worried.”

Some operators are closing up shop and others are cashing out while the industry’s at a high, Wright said, adding she’s seen a stark increase in the number of drive-ins landing on the sales block.

Wright said she’s hopeful that the added attention on drive-ins will help people value unique and communal aspects of society.

“As we lose places like [drive-ins], I do think it’s having an impact on us,” she said. “I think it does make us better as a culture and as humans when we have places to gather.”

Some drive-ins have come back from the dead, and others like The Mahoning Drive-In Theater in Leighton, Pennsylvania, successfully fended off threats that would have surely doomed the fan-favorite haunt.

Built in 1948 and opened the following year, the Mahoning “hasn’t changed a tremendous lot” since. The 1949-era projector runs 35 mm films reel to reel via Simplex E7 projectors onto a gargantuan 110-foot screen. Inside the vintage cinderblock snack bar, there’s a chow line for the food and vinyl records, VHS, DVDs and other memorabilia for sale. One notable modernization: The audio is broadcast via FM transmitter as opposed to the boxy speakers that would dangle inside the car window.

“Last year, the pandemic hurt a lot of drive-ins,” Nelson said. “They were forced to go retro, diversify with live events and play movies they wouldn’t normally play.”

For the Mahoning, however, retro hits right in its wheelhouse.

A night at the Mahoning, known for showing retro classics, schlock horror flicks and creature features, is a full spectacle: The trailers and intermission reels are themed to the movies playing that night; customers often dress up in character; and production designer J.T. Mills creates intricate artistic sets to accompany the films.

The septuagenarian saw some of its biggest attendances ever during the pandemic, Nelson said.

Other pandemic trends, including telecommuting that allowed city dwellers to emigrate from urban environments to more rural locales proved beneficial as well for some drive-ins. When Idaho saw its ongoing population growth heightened during the pandemic, the effect was noticeable at places like the the Parma Motor-Vu, located about 45 miles northwest of Boise proper.

“Every night, there are multiple cars we’ve never seen here before,” said Susan Haaheim, whose grandfather opened the Parma Motor-Vu in 1953.

Although drive-ins like the Parma Motor-Vu were fortunate enough to keep the projectors running during the pandemic, 2020 wasn’t smooth sailing by any means.

“What really saved us in 2020 was we started getting people asking about private events,” she said.

That included 13 graduations, a slew of company parties and gatherings like the Idaho Wine Commission’s “UnWined at the Drive-In,” an event that brought Boise resident Molly Lenty, 42, back to her first drive-in movie in years.

“Being away from the city lights, you’re truly out under the stars,” Lenty said.