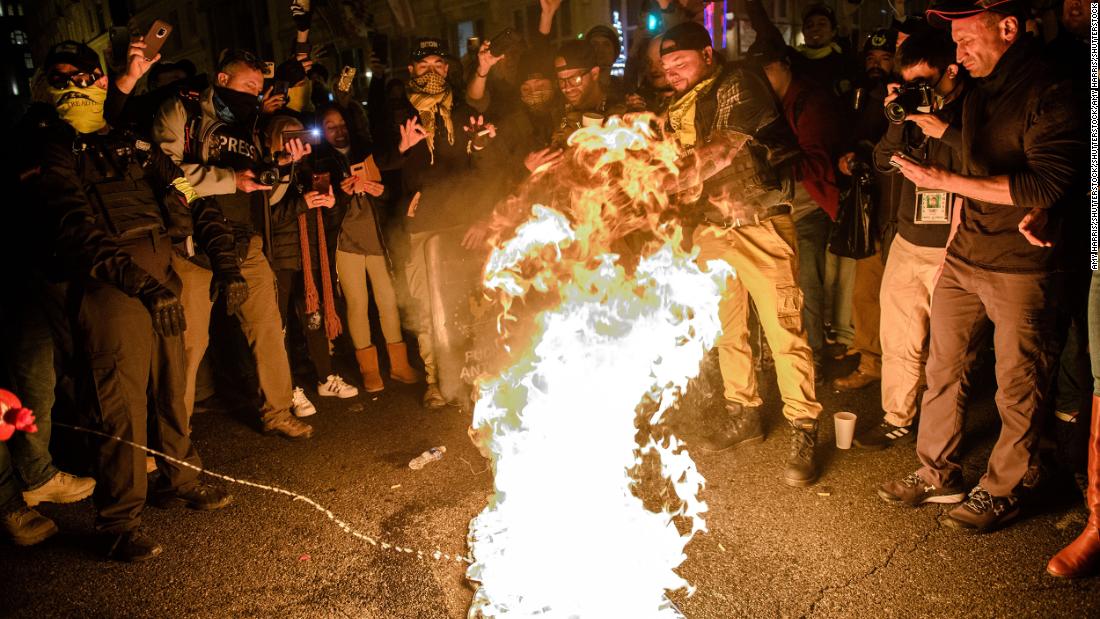 Prosecutors also said they want the judge to order Tarrio to stay away from DC during his probation, which could last well into 2023, in order to prevent future violence in the nation’s capital.

Tarrio, who has led the far-right group since 2018, pleaded guilty in July to two misdemeanors. On January 4, two days before the Capitol insurrection, he was arrested after he arrived in DC with the high-capacity magazines, which are banned under the district’s strict gun control laws.
The flag-burning incident occurred at the Asbury United Methodist Church on December 12, shortly after Tarrio and other Proud Boys attended a pro-Trump rally, which later led to violent clashes and stabbings in DC’s streets.

Tarrio’s sentencing is scheduled for Monday. The case is in DC Superior Court, which is essentially DC’s local court, and his sentence will be decided by Judge Harold Cushenberry Jr.

In new court filings, federal prosecutors described the pain felt by the historically Black church’s congregation after their Black Lives Matter banner was burned on their own lawn. Prosecutors quoted a letter from the Rev. Dr. Ianther M. Mills, the senior pastor at Asbury United Methodist.

“Imagine the images conjured up in the minds of Asbury congregants as a result of these white men burning the BLM banner: visions of slavery, the Ku Klux Klan, cross burnings, and the post-Civil War Jim Crow south,” Mills wrote to the judge in the four-page letter. “Try, if you can, to imagine the stress, fear, anxiety, frustration, anger and terror this must create for them.”

As part of Tarrio’s punishment, prosecutors also said in court filings that they want him to pay nearly $5,400 in restitution to cover the cost of “private security” that the church needed to hire after the incident.

Throughout the case, Tarrio has vehemently denied this was a hate crime against Black people. He was not charged with a hate crime. He claimed that his group tore down and burned the Black Lives Matter banner because it is a “Marxist movement,” something the church denies.

The Justice Department also urged the judge to send Tarrio to jail because it said he needed to be punished for threatening violence on January 6 and urging his followers to break the law. (Tarrio has not been charged with any crimes in connection with the Capitol insurrection, though a few dozen people with ties to his group have been charged with conspiracy and other felonies.)

“Tarrio was openly encouraging criminal behavior and violence on social media” in the run-up to January 6, prosecutors wrote, pointing out that some of his followers made good on the threats.

Judges often consider a defendant’s past criminal history during sentencing. In their sentencing recommendation, prosecutors brought up Tarrio’s 2004 felony conviction in Florida state court for grand theft and his 2014 federal conviction in a fraud case.