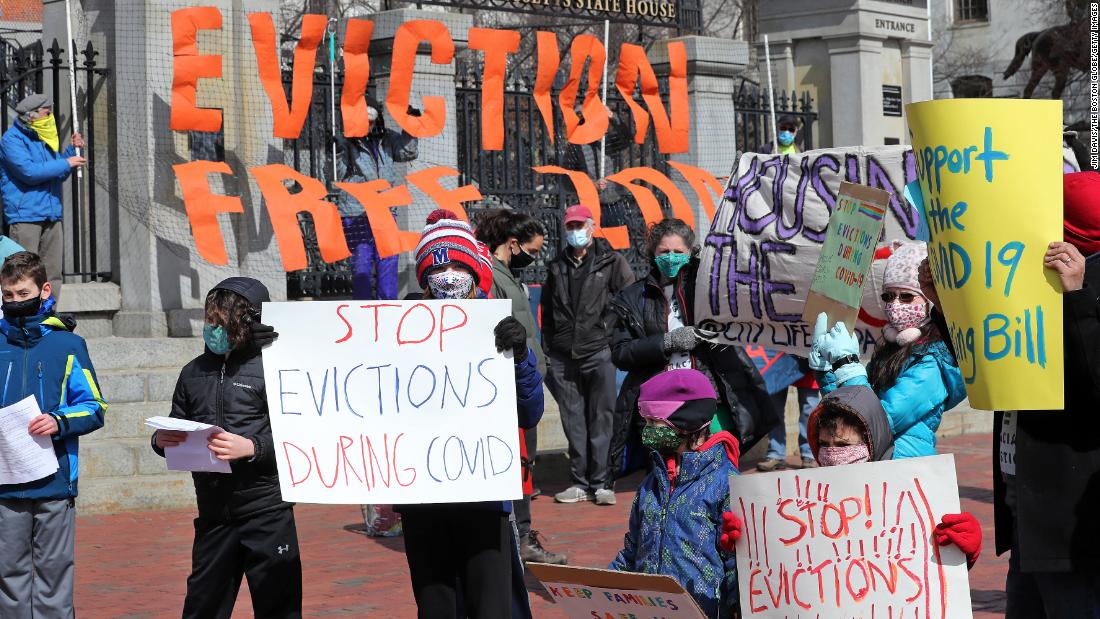 Democratic Rep. Alexandria Ocasio-Cortez on Sunday pointed to members of her own party when asked who was to blame for not extending the nationwide order, which expired at midnight Saturday.

“There was, frankly, a handful of conservative Democrats in the House that threatened to get on planes rather than hold this vote (on extending the moratorium). And we have to really just call a spade a spade. We cannot in good faith blame the Republican Party when House Democrats have a majority,” the progressive New York congresswoman told CNN’s Jake Tapper on “State of the Union,” adding that the Biden administration is partially to blame as the White House “waited until the day before the House adjourned to release a statement asking on Congress to extend the moratorium.”
The comments from Ocasio-Cortez came hours after House Speaker Nancy Pelosi sought to blame Republicans for allowing the moratorium to expire, with the California Democrat saying in a tweet late Saturday that in “an act of pure cruelty, Republicans blocked this measure — leaving children and families out on the streets.”

While the GOP blocked passing an extension of the legislation by unanimous consent on Friday, Democrats — heeding a last-minute call from President Joe Biden to extend the freeze — didn’t have the votes in their own caucus to pass the bill either. As a result, the order put in place by the US Centers for Disease Control and Prevention last fall to help stop the spread of Covid-19 expired and officials are now scrambling to fix the issue, which could affect the estimated 11.4 million adult renters who are behind on rent, according to the Center on Budget and Policy Priorities.

Biden’s last-minute call on Congress to extend the moratorium caught many Democrats off-guard, leading to a rare disconnect between the White House and members of the President’s party that has left millions of renters in the lurch.

Now, the midnight expiration of the nationwide freeze on evictions has led to new urgency within the administration to distribute billions in unspent housing assistance dollars that was approved by Congress earlier in the coronavirus pandemic, officials said on Sunday.

“The real issue here is how to get money out to renters who, through no fault of their own, are behind on their rent, to help landlords keep those renters in their home, which is a win-win,” Brian Deese, the director of the National Economic Council, said on “Fox News Sunday.”

Transportation Secretary Pete Buttigieg similarly said the unspent money needs to be tapped into, telling ABC News that “we need to get this emergency assistance out to people so they can stay in their homes.”

Some White House officials made a late-stage push last week to reexamine the legal potential for Biden to extend the moratorium, but were told by administration lawyers it wasn’t possible, according to people familiar with the deliberations. But administration lawyers and other senior advisers were clear that challenging a Supreme Court ruling from June would put them on shaky legal ground, and risk the potential of a more harmful ruling limiting the administration’s ability to enact other emergency public health rules.

Gene Sperling, who is responsible for implementing the pandemic relief efforts, has pushed for months to get the housing assistance to tenants and landlords, but so far only a small percentage of the $47 billion program has been disbursed.

Over the course of the past few weeks, Sperling worked with Treasury Department officials to make getting the aid out easier, including attempts to coordinate with state governments and making the application process easier. But federal officials said they met resistance from some state governments, who they said had been unhelpful in getting the money to renters.

“All that money is there. The states have the tools, the localities have the tools and there’s no excuse, they need to move the money to the renters and the landlords immediately,” Deese said, adding the administration was providing technical assistance to help the money flow more quickly.

Democratic Sen. Joe Manchin of West Virginia told Tapper in a separate interview on Sunday that he would support extending the moratorium to distribute the already allocated funds.

“Let’s fix that and make sure that we’re able to use the money for the purpose it was appropriated for,” he said.

But first House Democrats would need to return to Capitol Hill to advance a provision for Senate consideration.

Democratic Rep. Cori Bush is among some members of her party urging lawmakers to return to Washington to take action on the issue. Hours before the eviction moratorium deadline on Saturday, the Missouri congresswoman and a growing number of lawmakers and her supporters remained on the US Capitol steps, where Bush had slept overnight in an effort to appeal to her colleagues to extend the moratorium.

“How can we go vacation? No, we need to come back here,” she told told CNN’s Jessica Dean on “Newsroom” Saturday.

Bush, who had been unhoused and evicted before she joined Congress, said Saturday that she had been in communication with House leadership but hadn’t received any assurances that an extension would be passed.

Ocasio-Cortez similarly urged her colleagues to return to Washington to act on the order, telling Tapper on Sunday: “The fact of the matter is that the problem is here, the House should reconvene and call this vote and extend the moratorium.”

“One out of every six renters at risk of being kicked out of their home is worth coming back (for) … We cannot leave town without doing our job,” she said.