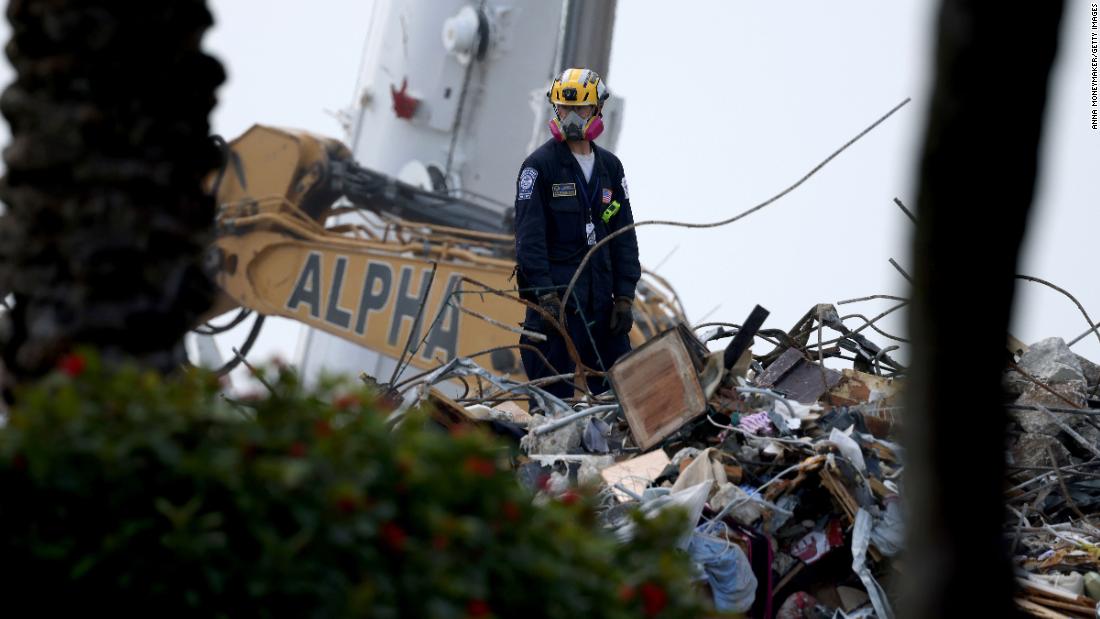 Seventy-one of the victims have been identified and their next of kin have been notified, Miami-Dade County Mayor Daniella Levine Cava said.

There are now 217 people accounted for and 31 others “potentially unaccounted for,” she said.

Recovering the victims has been much swifter after the search operation shifted its focus from rescue to recovery. Levine Cava said teams are making “incredible progress,” and as of Sunday morning, more than 14 million pounds of concrete and debris have been removed from the site.

Ten additional victims, all of whom were recovered between July 6 and 9, were identified by Miami-Dade officials in a statement Sunday.

The recovery effort is still delicate work, Surfside Mayor Charles Burkett said, telling reporters that search and recovery workers have “even found unbroken wine bottles in the rubble and recovered them.”

Miami-Dade Fire Chief Alan Cominsky echoed that statement. The process of removing debris is faster for the section of the building that remained standing after the collapse and was brought down in a controlled demolition last week amid concerns it posed a threat to search and rescue teams.

“On the rubble pile where we’re still in our search and recovery, it’s still a methodical process,” Cominsky said. “The crews there, they’re monitoring, they’re hand digging … As we’re delayering, it’s a slow process.”

Other personal belongings, like rings, continue to be recovered as well, Burkett said. Those items are being “returned to the site storage area, categorized, photographed and saved for the families.”

Burkett and Cominsky both acknowledged disappointment as rescue teams have accessed the condo tower’s stairwells, which they had hoped would be an area of refuge and perhaps provide the best chance for voids in the rubble where someone could survive.

“Unfortunately, with this type of collapse and everything coming down … it just minimized those opportunities.”

Some of the search and rescue task forces that had been deployed to Surfside from out of state or out of the country are beginning to leave, including a team from Israel. Levine Cava said the team would depart Sunday after she presented two of its leaders with keys to Miami-Dade County to recognize their service to the community.