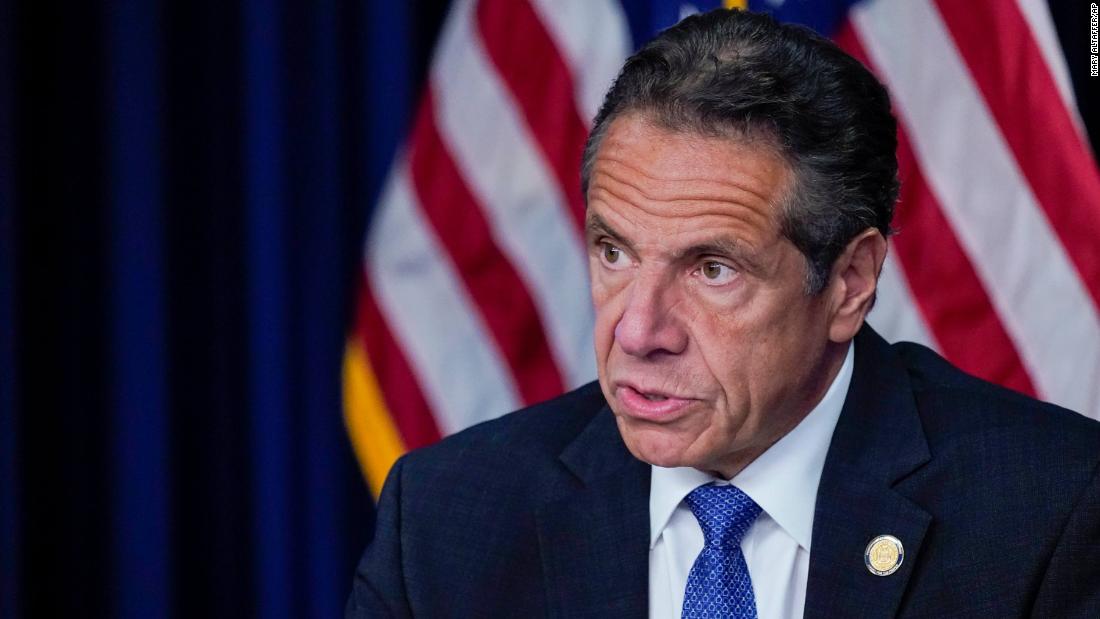 But Cuomo has signaled he will not go without another round of fighting, despite what the James report described as a “deeply disturbing yet clear picture” of his wrongdoing. Even before the findings of the independent investigators hired by James — as part of a probe that the governor referred to her office and claimed would exonerate him — were made public, Cuomo and his inner circle sought to undermine its credibility. In the hours after its publication, Cuomo again denied having “touched anyone inappropriately or made inappropriate sexual advances.”

Investigators spoke to 179 individuals and went through 74,000 pieces of evidence related to the allegations against Cuomo. Its findings confirmed the assertions of Cuomo’s critics and accusers and set off a rush of condemnations from many of the governor’s stalwart allies, who had either been supportive or quiet as the accusations mushroomed earlier this year.

Over the past few days, President Joe Biden, House Speaker Nancy Pelosi, New York Reps. Hakeem Jeffries and Gregory Meeks, New York State Democratic Committee Chair Jay Jacobs and Eric Adams, the Democratic nominee to become the next mayor of New York City, all called for Cuomo to resign. That heavy-hitting group joined the majority of the state House delegation, along with both Senate Majority Leader Chuck Schumer and Sen. Kirsten Gillibrand, who had previously asked Cuomo to go.

“The governor must make the determination if he’s going to resign,” Adams said Thursday on CNN. “I hope he will, but he has to make that final determination.”

Cuomo has also been cut off from the Democratic Party’s main fundraising tool, ActBlue, a platform used by its candidates — including the governor — to collect grassroots campaign donations. Cuomo has a massive reserve of campaign cash, in the neighborhood of $20 million, and relies more heavily on big dollar fundraising events than individual donations, but the move still stung — and illustrated the growing view among national Democrats that his brand has been irreparably tarnished.

As Cuomo and his thinning inner circle deliberate over their next steps, Republicans have begun to use his alleged abuses as a cudgel against Democrats outside of New York. In Virginia, a spokesman for Republican gubernatorial nominee Glenn Youngkin pressed Democratic nominee Terry McAuliffe, who has known Cuomo for decades, over his silence, asking in a tweet, “What’s taking so long?” Shortly after, in response to a reporter’s question and confirmed by CNN, McAuliffe called for Cuomo to step down.

Biden, who said in March that he would await the investigation’s findings before giving his opinion on Cuomo’s fate, was put on the spot the day of the report’s release. The President on Tuesday called for the governor to resign — and was put in the uncomfortable position of being asked about a series of photos, released by Cuomo’s lawyer, that showed the governor embracing a series of well-known political figures — including Biden, former President Barack Obama, Hillary Clinton, Pelosi and others — as a part of a lengthy response that claimed the investigation “had a predetermined outcome regardless of all the evidence.”

“I’m sure there are some embraces that were totally innocent,” Biden said, “but apparently the Attorney General decided there were things that weren’t.”

And in what could be a signal of things to come, Republican Iowa Sen. Joni Ernst offered an amendment to the Senate’s bipartisan infrastructure bill that would deny funds to any state in “which the governor of such State has been found, by the relevant State or Federal authorities, to have sexually harassed employees while holding the position of governor.”

In a statement, Ernst labeled it the “Cuomo Amendment.”

Repudations from top Democratic groups, Biden, leading lawmakers from New York and around the country, are — in this remarkable moment — somewhat lower down the list of Cuomo’s most immediate concerns. Right now, his fate lies in the hands of Albany lawmakers, who have their own probe nearing a finish and where, by the beginning of next week, the first real steps toward an impeachment vote in the state Assembly are expected to get underway.

Following the release of the James report, a majority of Assembly members — at least 80 in all, both Democrats and Republicans — told CNN they planned to vote “yes” on potential articles of impeachment. Cuomo would be replaced as governor by his deputy, Lt. Gov. Kathy Hochul, during a trial in the state Senate, where he would almost surely be convicted and removed from office.

And potential barriers to his impeachment in the Assembly appear to be falling.

Asked by CNN on Wednesday if Cuomo had any allies left in the legislature, State Assembly member Rodneyse Bichotte Hermelyn, the Brooklyn Democratic Party chairwoman, was blunt about the state of play.

“I don’t think so,” said Bichotte Hermelyn, who had been one herself. “I think you have heard from my colleagues, from lawmakers throughout New York State and throughout United States that Gov. Cuomo should resign and an impeachment process should proceed.”

State Assembly Speaker Carl Heastie, who would oversee Cuomo’s impeachment, has said Cuomo “can no longer remain in office” and pledged to “move expeditiously” to conclude the body’s investigative process.

Heastie, like Assembly Majority Leader Crystal Peoples-Stokes, is another longtime supporter of the governor and their statements — Peoples-Stokes said “the Governor’s ability to govern has been severely limited and irreparably damaged,” but stopped short of demanding he resign — have contributed to the growing sense that Cuomo is running out of options.

In a bid to slow the momentum behind the impeachment push, Cuomo’s legal team held a virtual press conference on Friday afternoon to argue that James and her investigators had been biased against the governor and conducted shoddy interviews.

Rita Glavin, Cuomo’s personal attorney, picked over details of the report and accused the probe of being “one-sided” and said the governor had been “blindsided.” She also alleged, repeatedly, that the investigation was “conducted in a manner to support a predetermined narrative.” But Glavin did not address large and damaging pieces of the report’s findings, saying that Cuomo would — at some point — personally address them.

Responding to Cuomo’s legal team, Fabien Levy, a spokesman and top aide to James, defended the integrity of the investigation.

“The independent investigators selected are widely respected professionals, recognized for their legal and investigatory ability,” he said in statement. “To attack this investigation and attempt to undermine and politicize this process takes away from the bravery displayed by these women.”

‘There’s no ability to talk about anything else’

Public opinion, too, appears to be swinging harshly against the governor.

Seventy percent of New York voters said Cuomo should resign, according to a new poll released on Friday by Quinnipiac University. That number included 57% of registered Democrats, 76% of independents and 88% of Republicans. Among Democrats, the figure has jumped a staggering 34 percentage points since Quinnipiac last asked the question back in March.

Cuomo’s approval rating is down to an all-time low of 28%.

One top Democratic strategist in New York, who hails from the centrist wing of the party, said he expected the governor to make a final, public plea for forgiveness — but did not expect it to move the dial.

“I think he’s going to try one last time to make an appeal of some kind, whether it’s in a press conference or an interview or something like that. And then I think pretty quickly the walls are going to close in because everybody has kind of lost patience,” the Democratic strategist said. “This might be different if we were in year four or five of his tenure, but we’re in year 11 of his tenure and the reality is that third terms, they’re oftentimes pretty much like death marches in politics.”

The state’s most powerful health care union, 1199SEIU, one of Cuomo’s most loyal backers, has also joined calls from other leading labor groups for him to leave office.

“We unequivocally condemn this and all sexual harassment and urge Governor Cuomo to resign,” George Gresham, the union president, said in a statement. The decision marked a stark reversal — emblematic of the changing political tides across the state — from just a little more than a month ago, when Gresham attended and spoke glowingly of Cuomo at a $10,000-a-ticket fundraiser in New York City, according to CNN affiliate Spectrum News, citing a person familiar with the event.

Meanwhile, Cuomo’s critics in the state Senate and veterans of political warfare with him and his allies are doubling down on their calls for him to resign, many of which date back to earlier this year as the allegations against the governor mounted.

“The longer this drags out, the worse it is both governmentally and politically for New Yorkers. We all know how this is going to end,” Senate Deputy Majority Leader Michael Gianaris, a Queens Democrat, told CNN. “It’s just a question of how much damage Andrew Cuomo wants to do to the state of New York and the Democratic Party on his way out the door.”

Gianaris and fellow Democratic state Sen. Andrew Gounardes, whose district partially overlaps with the Republican-held 11th US Congressional District, warned that a protracted impeachment battle and trial would slow the wheels of government to a near stand-still.

Questions over Cuomo’s future are “a huge distraction. It takes all the oxygen up in the room. There’s no ability to talk about anything else,” Gounardes told CNN. “I was doing a meeting yesterday with an advocacy group that we had planned weeks ago and honestly, we spent the entire meeting talking about this.”

Gounardes also said that anything other than swift action from the legislature opened up Democrats to deserving charges of hypocrisy.