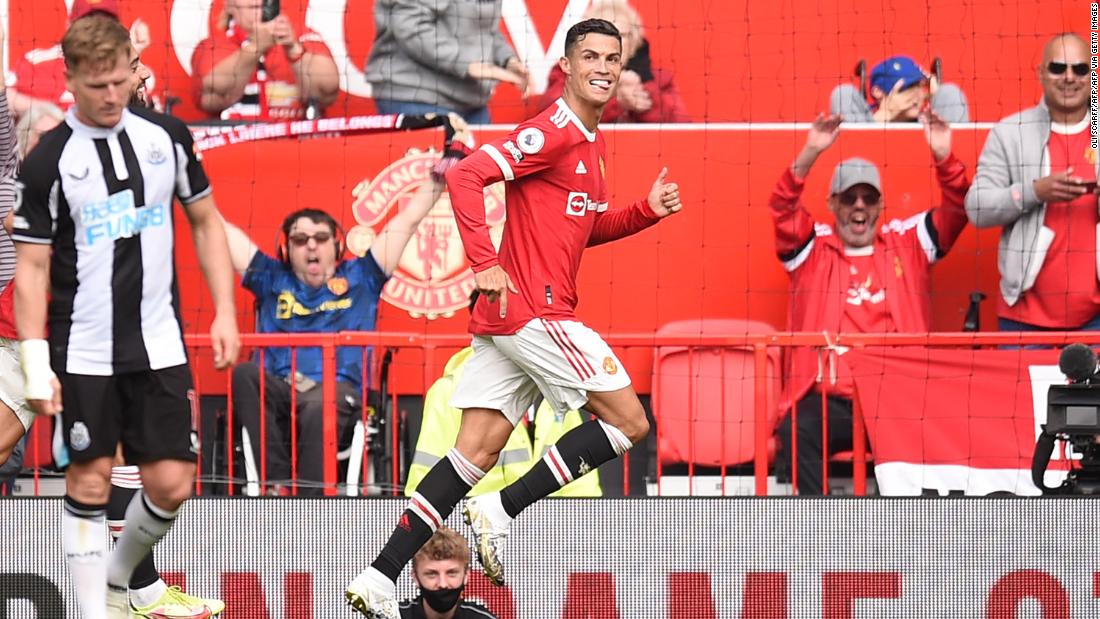 The Portuguese superstar rejoined the club from Juventus this summer. He scored 118 goals in 292 games during his previous six-year stint with Manchester United before leaving for Real Madrid in 2009 for what was then a world record fee.

In the first half of his second debut, the 36-year-old delighted the home fans, tapping home a rebounded shot from Manchester United superstar youngster Mason Greenwood.

In true Ronaldo form, he ran to the Old Trafford corner to perform his now-famous “Siuuuu” celebration.

His debut took a turn after the halftime break, however, as Javier Manquillo equalized for Newcastle after a swift counterattack.

However, Ronaldo showed again why he was brought back to Manchester, getting his second goal of the game with a powerful low finish to once again give United the lead.

Ronaldo’s Portugal teammate Bruno Fernandes extended Manchester United’s lead with a thunderbolt of a strike from about 30 yards out from goal before Jesse Lingard scored to make it 4-1.

“Good players can always play together. They have a mutual respect and play for Portugal together,” Solskjaer told Sky Sports afterwards.

“It’s too early for me to predict where we’ll end up. We have to be consistent and let’s see where we are. It’s changed [the atmosphere]. A few months back you think how it was here. This is what Man Utd supporters should feel like.”

It was the game all Manchester United fans wanted to see: the return of Ronaldo.

Shirts with his name and the famous No. 7 had flown off the racks and the Old Trafford stands were full of fans hoping for a glimpse of the five-time Ballon d’Or winner.

The excitement grew further when, an hour before kickoff, it was announced that Ronaldo would be starting.

The roar that welcomed him on the pitch ahead of kickoff almost lifted the roof of the famous stadium, and Ronaldo’s first few touches in the red kit of Manchester United were cheered as if he had scored.

The fans only had to wait until just before halftime to get what they’d come to see: Ronaldo scoring once again for their club.

Some good work from England international Greenwood resulted in Newcastle Freddie Woodman saving the attempt, only for it to fall at the waiting feet of Ronaldo, to score his first goal for the club 12 years and 124 days.

In celebration, Ronaldo delighted fans by performing his now customary celebration, where he jumps, spins and thrusts his arms out while exclaiming, “Siuuu.”

But after halftime, Newcastle showed they weren’t going down without a fight.

It didn’t last long though, as Ronaldo once again displayed why he’s the top goalscorer in men’s international football.

A slick through ball from Luke Shaw fell at his feet, which he powered between the legs of Woodman in goal for his second goal of the game.

A wonder strike from Fernandes extended the lead to two before Lingard made it 4-1.

Afterwards, Fernandes praised the impact Ronaldo has had on the team.

“Everyone knows what Cristiano Ronaldo brought for the club and we are really happy to have him,” he told Sky Sports.

“The most important, as he will say, is the result for the team. Good players can always play well together.