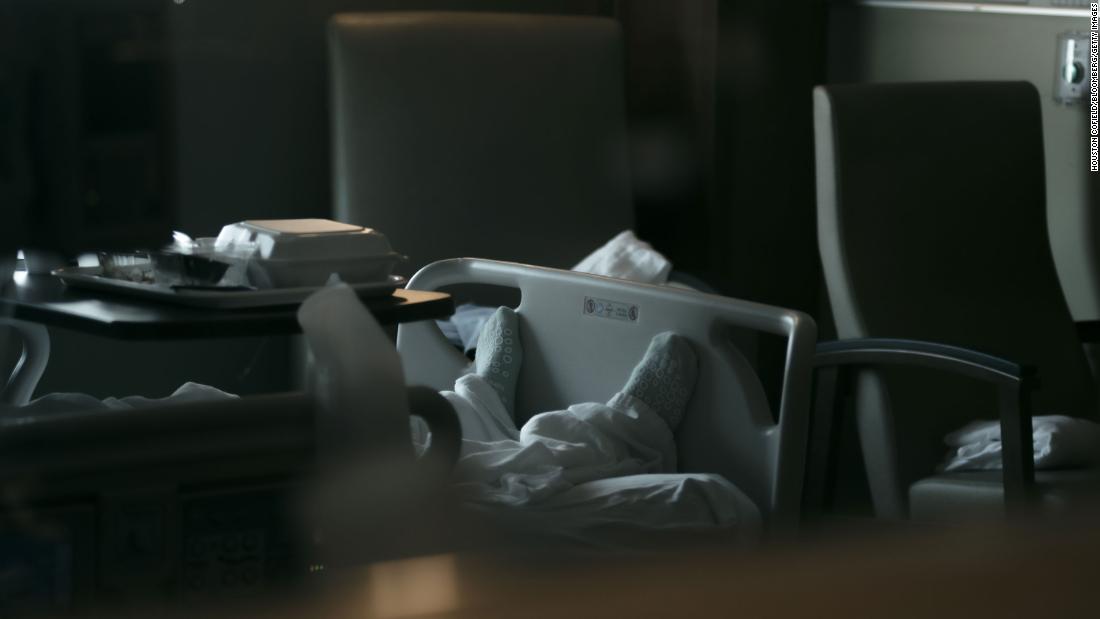 If an overwhelming majority of the population is vaccinated, the virus will disappear in the country, Fauci said. But having only a partially vaccinated population means that smoldering levels of infection will carry into the fall, be confused as the flu in the winter and pick back up in the spring, Fauci told USA Today.

And if the rest of the world isn’t vaccinated over the next couple of years, more circulation could mean more variants, Fauci warned.

Already, states are struggling to fend off the Delta variant, a strain believed to be significantly more transmissible than others. In 47 states, the seven-day average of new cases is surging by at least 10% more than the previous week, according to data from Johns Hopkins University. And the US is averaging more than 100,000 new Covid-19 cases every day — the highest in almost six months, according to data from Johns Hopkins University.

In many parts of the country, particularly the South, hospitalizations are surging. Louisiana set a new record for Covid-19 hospitalizations last week, Florida’s hospitalizations jumped 13% over the previous peak in 2020, and a hospital in Houston said Sunday morning there are no more beds left in the facility.

“Over the last 12 hours, we have lost more patients than … in the last five to six weeks,” Houston’s United Memorial Medical Center Chief of Staff Dr. Joseph Varon said.

And though the impacts of the pandemic are worsening once again, some continue to engage in activities that health experts worry are high risk for spread, like the 10-day motorcycle rally in Sturgis, South Dakota, that began over the weekend. Fauci told NBC’s Meet the Press he worries the event could cause a rapid surge in cases.

“There comes a time when you’re dealing with the public health crisis that could involve you, your family and everyone else, that something supersedes that need to do what you need to do,” Fauci said. “You’re going to be able to do that in the future, but let’s get this pandemic under control before we start acting like nothing is going on. Something bad is going on. We’ve got to realize that.”

The answer to stopping or slowing the virus could be vaccine mandates, which Fauci told NBC he would support once the vaccines get full approval from the Food and Drug Administration.

Fauci added that while he can’t predict when a Covid-19 vaccine will receive full FDA approval, he hopes it will be “within the next few weeks.”

Experts not worried about vaccine protection yet

The good news, experts say, is that data shows that vaccines do protect against the strains the US is currently grappling against.

Some concerns have risen with the emerging Lambda (C.37) variant, first identified in Peru. But the teams that study emerging variants vigorously don’t yet have anxieties about vaccines not working against Delta or Lambda, Dr. Francis Collins, director of the National Institutes of Health told George Stephanopoulos on ABC on Sunday.

“We all worry about the day when a variant arrives that the vaccines stop working as well,” Collins said. “The best way to reduce that from happening is to reduce the number of infections. That’s how variants happen.

“All the more reason why we should be doing everything possible to cut back the wild spread of Delta so we don’t get something even more dangerous.”

When data shows protection goes below a certain threshold, health officials will recommend boosters for the general population, Fauci said.

Boosters could come too late for immunocompromised people

Concerns over vaccine protection are different for people who are immunocompromised, have had a transplant or are undergoing cancer therapy.

“We know for sure that they never did get an adequate response — most of them, not all of them, but most of them,” Fauci said. “We need to look at them in a different light than the durability for a normal person, which means that we will almost certainly be boosting those people before we boost the general population that’s been vaccinated.”

Research published in JAMA Network Open estimates that 6 million people in the US are taking immunosuppressants that could interfere with the vaccine — a number the researchers say is likely an under-estimate.

The FDA is moving quickly to make a decision on Covid-19 vaccine boosters for people with compromised immune systems, and a decision could come sometime before early September, a Biden administration official told CNN.

Even if the decision comes soon, it may not be soon enough for people who are immunocompromised amid the spread of the Delta variant, according to Dr. Scott Gottlieb, former commissioner of the FDA.

“Because by the time you actually make that decision … and you start operationalizing a booster campaign, you’re talking about maybe late October if the decision comes in September, that you can start getting a sizeable number of people boosted,” Gottlieb told CBS Sunday.

“It takes time to get that stood up and get people into the doctors’ offices to get injections. And it will take a couple of weeks for the immunity to mature.”