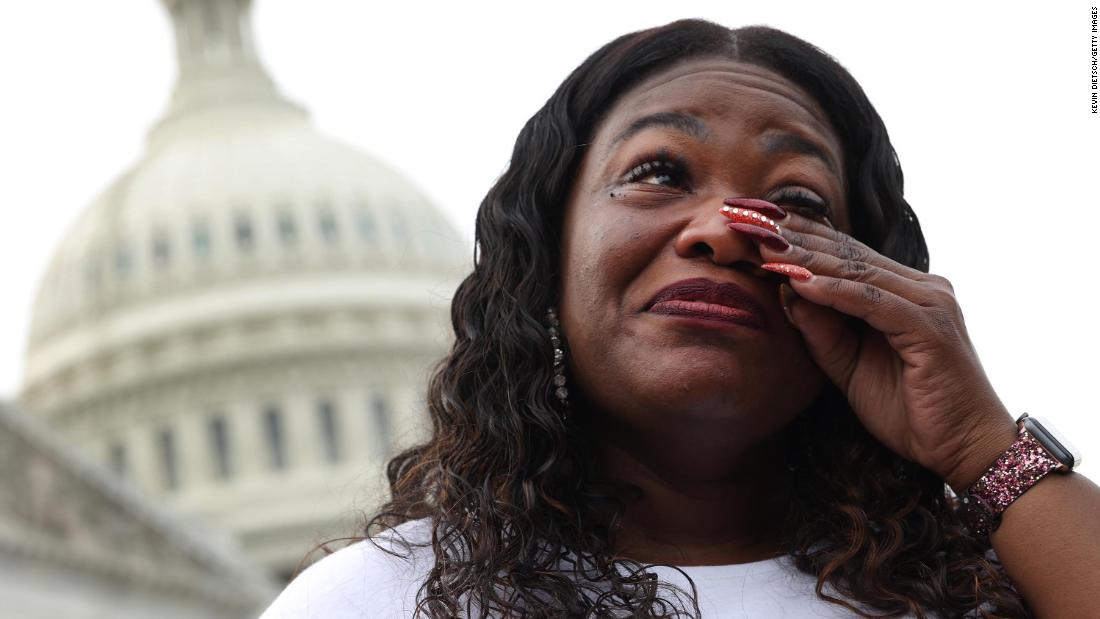 The Missouri lawmaker’s actions culminated in a major victory for progressives on Tuesday when the Biden administration announced a 60-day eviction ban in areas of the country with high or substantial transmission of Covid-19.

“I’m elated and I’m overwhelmed because just the thought that so many people right now, millions of people, will not be forced out on the streets,” Bush told CNN’s Erin Burnett on Tuesday.

The effort and the results have not gone unnoticed and congressional Democrats, including House Speaker Nancy Pelosi and Senate Majority Leader Chuck Schumer, have been quick to praise the congresswoman for taking a stand. “Congratulations,” Schumer said effusively as he hugged Bush outside the Capitol on Tuesday.

Sources close to the congresswoman tell CNN that she is back in St. Louis at the moment, taking stock of this time in the national spotlight, and that she feels “emboldened” and “incredibly validated” by what has transpired.

For Bush, the issue is personal. Prior to being elected to Congress, she faced eviction herself on multiple occasions, including as recently as 2015. The 45-year-old single mother has been evicted three times before and has spoken about what it was like to live out of a car with two children.

“As someone who has lived in her car with my two infants while I was working a full-time job, I know the daily trauma and stress that comes with the perpetual instability of not having a safe place to live,” the congresswoman said in July.

White House press secretary Jen Psaki said Wednesday, when asked what role Bush’s protest played in the administration’s decision-making on the eviction moratorium, “I don’t think anyone could hear congresswoman Bush’s own personal story and experience and see her advocacy and her passion and not be moved by that. I know a number of members of Congress were moved by that as well.”

The congresswoman has had an unexpected rise in politics.

In 2014, after the killing of Michael Brown in Ferguson, Missouri, Bush marched, organized and provided support to her community in crisis as a nurse and pastor.

“On the streets of Ferguson, it was totally organic,” Bush told CNN’s Brianna Keilar on Wednesday. “We were outraged, we were frustrated, and upset, we were angry. It was very emotional and intense, and the hurt, you know, fueled us to want to do more.”

That community activism sparked her congressional run — and in 2020 she defeated 20-year incumbent congressman Lacy Clay in a Democratic primary upset.

As a member of Congress, Bush has used her voice to speak out about her lived experiences as a Black woman as she advocates for policy change and racial justice.

In May, Bush testified about challenges she faced during pregnancy and childbirth at a hearing on America’s Black maternal health crisis. Bush recalled telling her doctor she was experiencing severe pain only to have her doctor tell her she was fine. She described how she went into preterm labor one week later and how her son was put on a ventilator for the first month of his life.

Bush has also spoken about being a survivor of domestic violence and sexual assault, saying in March, “I know the pain and fear that comes with abuse. In this country, 1 in 4 women and 1 in 10 men will experience severe physical abuse from a partner. I was one of those women. I know the trauma of being left for dead by an abusive partner.”
The congresswoman told Elle magazine in the spring, “I think a lot of what people don’t realize is that, like you said, I’m just being me. My priority is the people who have been left out, who haven’t felt seen, haven’t felt heard.”
In November 2020, Bush spoke candidly about how she was preparing to take office as a congresswoman, tweeting, “The reality of being a regular person going to Congress is that it’s really expensive to get the business clothes I need for the Hill. So I’m going thrift shopping tomorrow.”

Bush later said she received an outpouring of positive responses from women afterward.

“The response has been tremendous,” she told CNN’s Burnett last year. “Women have reached out saying I feel heard, and I don’t feel ashamed.”