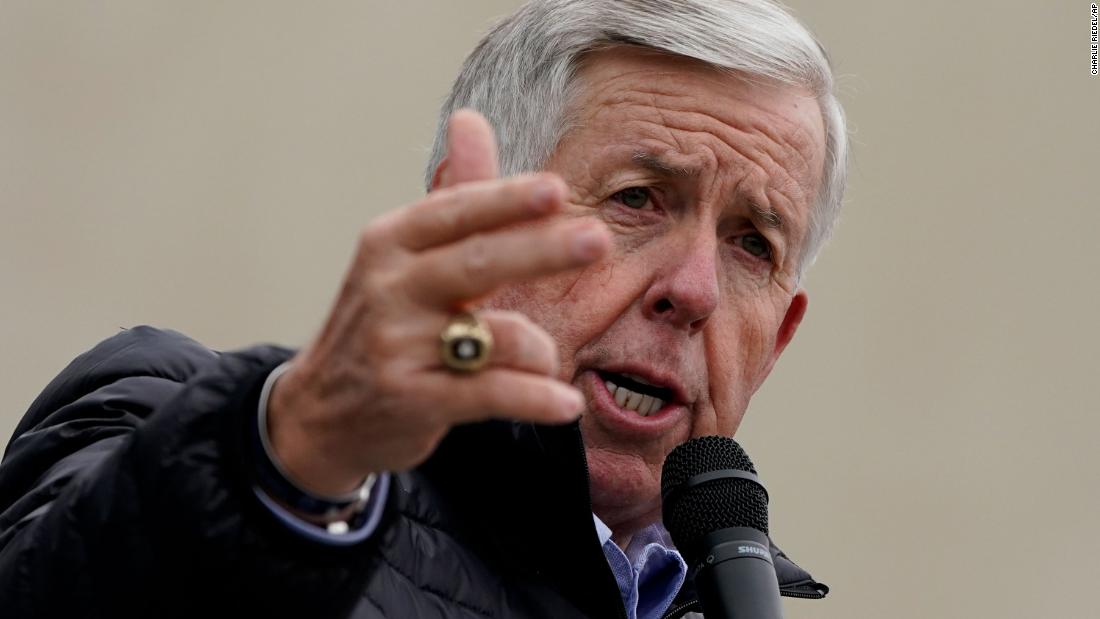 The officials told CNN that local officials in Cape Girardeau decided their officers couldn’t assist federal authorities because there was a chance a drug dealer had a gun in the home.

City officials cited the law — which was passed by state lawmakers in June and goes into effect this weekend — that the state’s Republican governor says is aimed at protecting Second Amendment rights, and the possibility that federal authorities may seize guns meant that local officers couldn’t provide assistance to the federal officers, the US law enforcement officials said.

In the end, the operation went forward, but the episode is one of several that federal agents have encountered in Missouri because local authorities are worried about running afoul of the state law called the Second Amendment Preservation Act. In some cases, police departments have withdrawn their officers from task forces led by federal law enforcement agencies.

The city of St. Louis, St. Louis County and Jackson County filed a lawsuit in June to block enforcement of the law that’s set to go into effect on Saturday. The Justice Department submitted a statement of interest earlier this month in support of the lawsuit. The Justice Department said Cole County Circuit Judge Daniel Green could rule on the lawsuit as soon as this week.

Most of the conflicts raised by the law have come in operations involving the Bureau of Alcohol Tobacco, Firearms and Explosives (ATF), which enforces gun laws, according to Justice Department officials.

But other federal law enforcement agencies have encountered issues as well that hamper cases that need federal help.

Partnerships between local, state and federal authorities exist due to the recognition that federal assistance “allows the effort to go beyond state lines, to go beyond city lines,” said Keith Taylor, a former New York Police Department officer and adjunct criminal justice professor at John Jay College. The local involvement ensures that law enforcement has enough officers on the ground to thoroughly conduct investigations, he added.

The consequences, federal law enforcement officials say, are hurting efforts to curb crime at a time when the violent crime rates are up in Missouri and other states around the country.
A study during the first six months of this year in 29 cities showed that the number of homicides increased by 16% compared to the same period in 2020 and by 42% compared to the first six months of 2019, according to the Council on Criminal Justice.

In Missouri, the State Highway Patrol reported 730 homicides statewide in 2020, a 26.5% increase over 2019, and the 13,869 firearm related offenses recorded last year represent a 108% increase over 2019. Of more than 8,000 firearm crimes reported so far this year and 218 homicides, 74% involved a firearm, according to a declaration filed in support of the lawsuit by Frederic Winston, a special agent in charge of the Kansas City Field Division of the ATF.

In an internal memo to Cape Girardeau police officers obtained and reviewed by CNN, Lt. Darren Estes, a patrol division commander, told his officers that “it will take a significant amount of time before the dust settles and we get clear guidance on what our role will be in the future investigations with Federal law enforcement.”

“Until such time the law is upheld, modified or completely struck down, it will be the policy of our department (as well as many others across the state) to no longer assist Federal law enforcement agencies in ANY type of investigation,” Estes wrote in the memo.

The law, which will go into effect on August 28, “prohibits state and local cooperation with federal officials that attempt to enforce any laws, rules, orders, or actions that violate the Second Amendment rights of Missourians,” according to the office of Missouri Governor Michael Parson.

Law enforcement agencies could face a $50,000 fine if they “infringe” on Missourians’ rights by enforcing a federal gun law, the governor’s office said.

Since the law was passed, 12 of 53 state and local officers with federal deputizations have withdrawn from ATF task forces, Winston wrote in court documents.

By pulling state and local officers from the task forces, the bureau “is no longer able to fulfill its duties as effectively, including preventing, investigating, and assisting in the prosecution of violent offenders,” Winston wrote.

ATF, which has 25 field divisions throughout the country, “is the only federal agency authorized to license and inspect firearms dealers to ensure they comply with laws governing the sale, transfer, possession and transport of firearms,” according to the declaration.

Violent crime in Missouri is a “significant problem,” and ATF’s role in limiting illegal access to firearms is “key to preventing additional violent crimes in the state,” Winston wrote.

Under the law, “protections against federal overreach are triggered if federal officials attempt to violate the state or federal constitution. Additionally, the bill is an acknowledgment that the right to keep and bear arms is fundamental and inalienable,” according to Governor Parson’s office.

By not allowing local and state authorities to work with the federal government, efforts to deal with the national gun violence problem are going to be “severely curtailed,” said Taylor of John Jay College.

“They are trying to make it as difficult as possible for federal law enforcement intervention in the existing practices of the local authorities,” Taylor told CNN. “The problem is that illegal gun sale and the trafficking of guns interstate can only be addressed at the federal level by working with local authorities.”

The Federal Bureau of Investigation’s Safe Streets and Gang Unit administers 160 task forces nationwide, which pursue violent gangs in collaboration with federal, state and local law enforcement agencies through “sustained, proactive, coordinated investigations to obtain prosecutions on violations such as racketeering, drug conspiracy, and firearms violations,” according to the FBI.

The new Missouri law has limited the ability of state and local entities to share information and data with their federal partners, according to the Justice Department’s statement of interest. This information — which assists law enforcement in combating and solving crime — includes “crime-related data, police reports, investigative records, background information on targets,” and access to “evidence such as firearms and ammunition used in crimes,” the statement of interest says.

The new law “undermines law enforcement activities in Missouri, including valuable partnerships federal agencies have developed,” the Justice Department wrote. “Under the United States Constitution’s Supremacy Clause, the State of Missouri has no power to nullify federal laws.”

CNN’s Christina Carrega and Peter Nickeas contributed to this story.