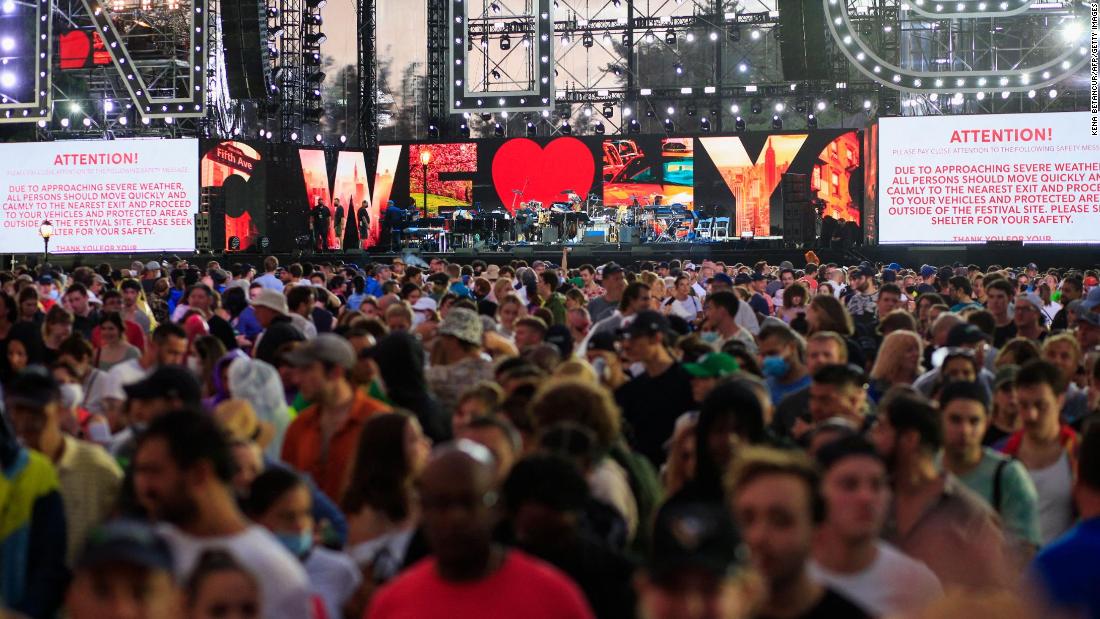 Some of music’s biggest names descended on the Great Lawn at New York City’s iconic Central Park for the “We Love NYC: The Homecoming Concert” on Saturday to perform for a vaccinated crowd of 60,000.

The concert was meant to be “a celebration of New York City’s comeback” after a challenging 17 months marked by the Covid-19 pandemic and “promote health, safety, and equity,” according to a news release for the show.

Nearly three hours after the concert started, the New York City Police Department (NYPD) issued an advisory to all concert attendees in Central Park to evacuate “due to approaching severe weather,” according to the agency’s Twitter page.

The NYPD advised all attendees to calmly approach the park’s exits in guidance with NYPD officers on the ground.

Before the weather forced the concert to be halted, concertgoers got to witness multiple performances including JP Saxe and Julia Michaels’s “If the World Was Ending,” Italian superstar Andrea Bocelli’s “O Sole Mio,” and Earth, Wind & Fire’s classic hit, “September.”
Guitar legend Carlos Santana was also joined by Wyclef Jean to perform “Maria Maria,” Jennifer Hudson delivered a striking performance of the aria “Nessun Dorma” with the New York Philharmonic, and Rev Run, from hip-hop group Run DMC, performed “It’s Tricky” with LL Cool J.
Barry Manilow’s performance of “I Can’t Smile Without You” was cut short due to the inclement weather in the area. While he was interrupted by loudspeakers making evacuation announcements, Manilow was able to talk to Anderson Cooper about the interruption and sing the song he wasn’t able to perform.

The event, which was aired exclusively on CNN, was produced by legendary music executive Clive Davis in coordination with the city of New York and Live Nation. The coverage began with a preshow hosted by Anderson Cooper at 4 p.m. ET, with the concert kicking off at 5 p.m.

It is unclear if the concert will be continued at a later date.

New York City Mayor Bill de Blasio declared a state of emergency ahead of Hurricane Henri making landfall on Long Island Sunday, he announced on Twitter Saturday afternoon.
Henri, which strengthened from a tropical storm late Saturday morning over the Atlantic, could make landfall at or near hurricane strength on New York’s Long Island or southern New England on Sunday, the National Hurricane Center said.

Parts of the Northeast began to feel Hurricane Henri’s first impacts Saturday evening as the storm barreled toward the coast ahead of an anticipated Sunday landfall, threatening to bring damaging winds, dangerous storm surge and flooding to an already saturated area.