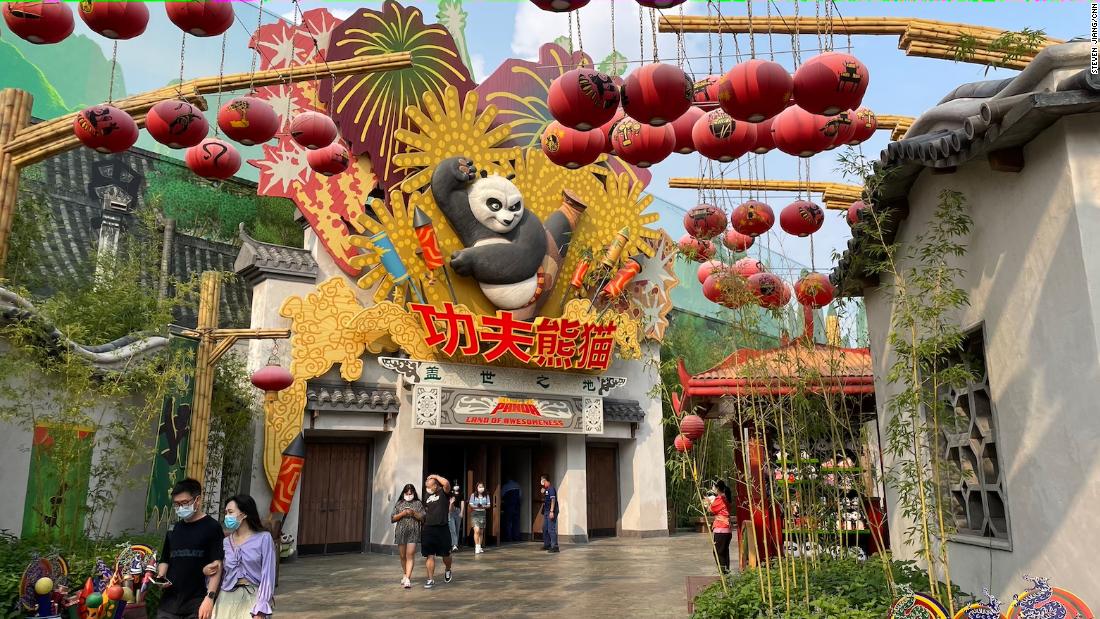 These are just some of the wild creatures that await visitors to the new Universal Studios Beijing Resort, which officially opens September 20 following several delays due to the pandemic.

Made up of seven themed lands filled with 37 rides, it will be the world’s fifth Universal Studios theme park.

It has many of the popular attractions found at its counterparts in Singapore, Osaka, Los Angeles and Orlando. But there are some Universal firsts as well, including the Kung Fu Panda Land of Awesomeness.

CNN spoke with several people who had a chance to visit as part of the pre-opening trial operations now underway. Visitors report that wait times could be high, while some shows were so popular it was impossible to get access.

China’s first Universal Studios theme park is made up of seven themed lands.

Among the most popular attractions are the scream-inducing Decepticoaster inside the Transformers area, and all the Harry Potter rides. The Jurassic World Adventure and the Minions simulator rides also attract long lines.

In spite of capacity being limited during the “pressure-testing” and soft opening period, wait times for more popular rides were well over an hour long during much of the day, CNN was told.

“During trial operations, invited guests will experience selected rides, attractions, shows and dining services throughout the Universal Studios Beijing theme park on designated dates,” says a news release from the park. “Based on feedback and comments from invited guests, Universal Beijing Resort will look to adjust operational practices and service details in preparation for the upcoming grand opening.”

Though local media reported complaints that pre-opening invitations are being sold by scalpers, entry is based on real-name registration — visitors need to provide their names and ID numbers in advance and their faces are scanned at the main gate.

Built at an estimated cost of 50 billion yuan (US$7.7 billion) according to the Hong Kong-based South China Morning Post, the park has many attractions and restaurants designed to reflect the country’s cultural heritage.

Guests who have been to the other Universal parks and want to experience something fresh will be most excited about the Kung Fu Panda Land of Awesomeness. With much of the area set indoors, it’s perfect for those wanting to beat the summer heat or, in a few months, the winter chills.

Attractions here include Po’s Kung Fu Training Camp, the Carousel of Kung Fu Heroes and the Kung Fu Panda Journey of the Dragon Warrior. And yes, it does feature a Mr. Ping’s Noodle House, modeled after the movie version, among the dining options.

People visit the Universal Beijing Resort during its pre-opening “pressure-testing” period on August 23, 2021 in Beijing, China.

Visitors to the Wizarding World of Harry Potter can experience the globally popular Harry Potter and the Forbidden Journey ride inside the towering Hogwarts Castle, as well as the Flight of the Hippogriff. There’s also a shopping and dining area, Hogsmeade, where guests can shop for wands at Ollivanders and then pop into the Three Broomsticks for a mug of Butterbeer.

Transformers Metrobase is where guests will experience the impressive outdoor Decepticoaster, while the Minion Land and Jurassic World Isla Nubar have plenty for the little ones.

Those looking to take in the impressive live shows Universal is famous for will want to head straight for the WaterWorld and Hollywood lands or risk missing out as seats fill fast, according to recent visitors.

Covid control measures have been implemented throughout the resort, including temperature checks upon entry. Masks are mandatory.

Guests of the park have two resort hotels to choose from — the Universal Studios Grand Hotel and the NUO Resort Hotel. Nearby is the restaurant-filled Universal CityWalk, which doesn’t require a ticket to enter.

It’s an easy drive from central Beijing and near several expressways, while a dedicated subway station is now open as well.