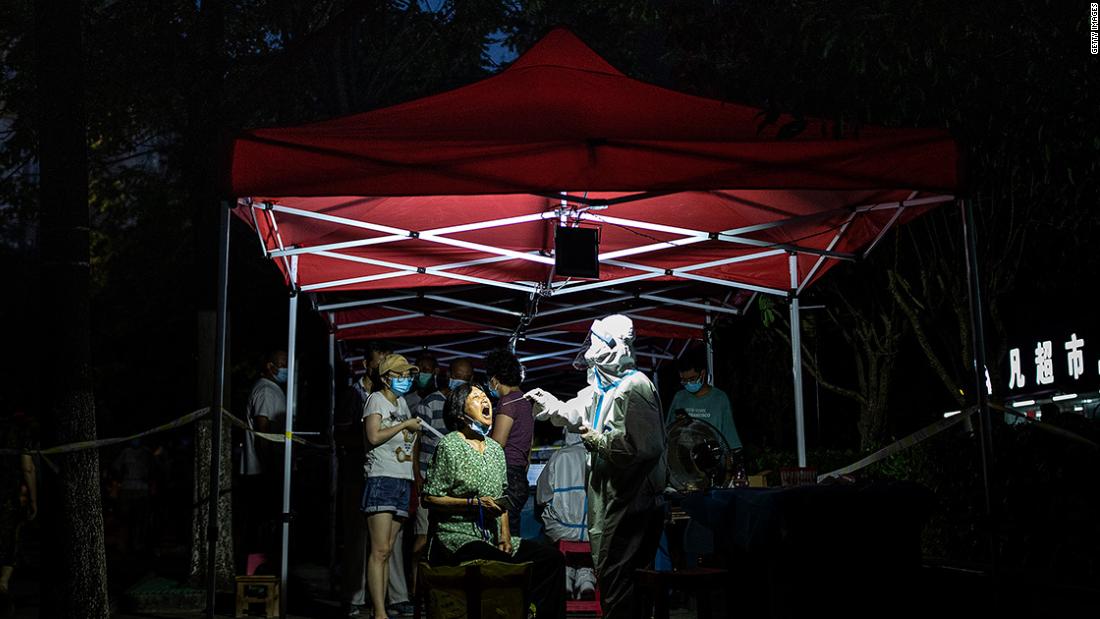 The current outbreak, which first emerged in the eastern city of Nanjing, has spread to over half of China’s 31 provinces and caused more than 1,000 symptomatic infections in three weeks, according to a CNN tally of the National Health Commission’s daily reports.

Such measures have been deployed at a scale and intensity unseen in China since the initial outbreak in early 2020. Those officials who failed to implement the measures promptly or thoroughly enough are now finding themselves facing disciplinary actions.

Across the country, at least 47 officials, ranging from the heads of local governments, health commissions, hospitals and airports, have been punished for negligence, according to official statements and state media reports.

In Nanjing, the capital of Jiangsu province,15 officials were held accountable for allowing infections to spread at the Nanjing Lukou International Airport, according to a statement from the Communist Party’s Central Commission for Discipline Inspection (CCDI).

The airport is where the outbreak is believed to have first started, with nine cleaners found to be infected on July 20 during a routine coronavirus test. Authorities have linked the cluster to a flight from Russia which arrived on July 10.

Three officials at the airport are under investigation by the provincial disciplinary authorities, and two of them have been detained. Others, including Nanjing’s vice mayor, have received penalties ranging from suspension to severe warnings, according to the statement.

In Zhangjiajie, a tourist hotspot in southern Henan province famed for its pillar-like karst formations that inspired the movie Avatar, 18 officials were punished for their slack response in dealing with the flare-up, according to another statement from the CCDI.

Zhangjiajie was placed under citywide lockdown last month after a theater performance attended by thousands of people fueled concerns of a super-spreader event linked to the Nanjing cluster.

The city of Yangzhou, in neighboring Nanjing, has become a Covid hotspot. As of Tuesday, it has reported 394 symptomatic infections, including 26 “severe cases” and six patients who are critically ill.

On Sunday, Yangzhou’s disciplinary commission issued warnings to six officials and criticized two others for mishandling a mass testing site, causing the virus to spread among test takers. So far, the cluster has caused more than 30 infections, according to state media.

China’s “zero tolerance” Covid strategy has put local governments under huge pressure to keep the virus at bay, and a slew of officials have been punished during previous rounds of local outbreaks.

The highly infectious Delta variant, however, has thrown China’s zero Covid strategy into question, raising uncertainty over how sustainable the approach is.

In recent weeks, some prominent Chinese public health experts have called for a switch in approach, suggesting that the country learn to coexist with the coronavirus in line with other countries with relatively high vaccination rates.

On Sunday, however, China’s former health minister published a commentary in party mouthpiece People’s Daily attacking the idea of “coexisting with the virus,” potentially suggesting official resistance to the approach.

In the article, Gao Qiang, the former minister, accused the United States and the United Kingdom of “disregarding people’s health and safety” and causing a resurgence of outbreaks by relaxing Covid restrictions.

“We not only cannot relax epidemic control, but have to further strengthen weak links, plug loopholes, and resolutely monitor the epidemic situation and issue early warning. This is not to ‘coexist with the virus,’ but to engage in long-term struggle to eradicate the virus,” Gao said.