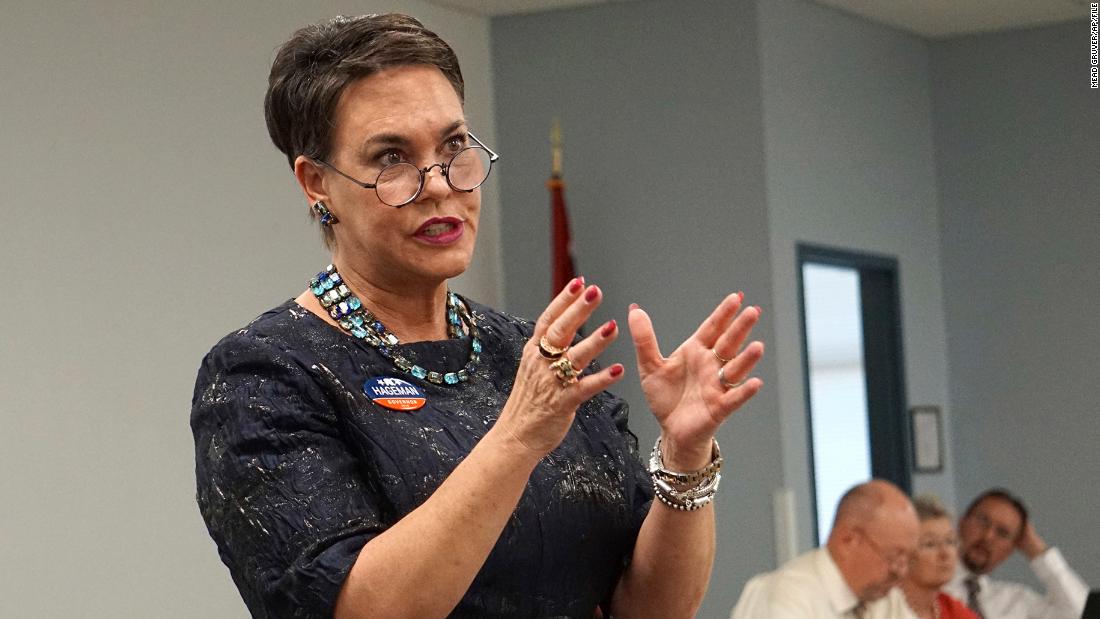 In an interview, Hageman called Trump the “leader of the party” and questioned the integrity of the past election. She repeatedly declined to acknowledge that Joe Biden won, and said, “I think that there are legitimate questions about what happened during the 2020 election.”

When pressed on what questions she had, Hageman pointed to audits conducted by Republicans in Arizona and Georgia. She said the public “will know more once those reports are released.”

There is no evidence of widespread fraud in the 2020 election. But the 2022 Wyoming House race could still turn on how Republicans answer Hageman’s question, as the party decides whether to believe a conspiracy.
Cheney has called Trump’s continued effort to claim victory a “big lie” that is a “grave threat to democracy” in the hope that Republicans turn the page from him. She was recently named vice chair of the House select committee investigating the January 6 Capitol riot.

But she is playing on Trump turf: In 2020, nearly 70% of Wyoming voters supported him, more than in any other state in the country, while Cheney received nearly 69%.

Even some of Cheney’s supporters wonder whether she will win the race, as other Republican candidates drop out to unite behind Hageman.

“I think it will be close,” said Wyoming state senator Charles Scott, a longtime Republican legislator. “It’s not a sure thing either way.”

Cheney plays up conservative record in bid to save seat

Cheney was first elected to the House in 2016, after a lifetime of promoting hawkish foreign policy values, and quickly rose to the No. 3 House GOP position. She is the daughter of the state’s favorite son, former Vice President Dick Cheney, who served in her statewide seat from 1979 to 1989.

But Liz Cheney broke from the GOP base when she voted to impeach Trump in January for “incitement of insurrection.” After a pro-Trump mob breached the Capitol in attempt to stop Congress from certifying Biden’s victory, she said Trump “summoned,” “assembled” and “lit the flame of this attack,” and that “there has never been a greater betrayal by a President of the United States of his office and his oath to the Constitution.”

The backlash in her party was swift. The Wyoming Republican Party censured her, saying that “there has not been a time during our tenure when we have seen this type of an outcry from our fellow Republicans.” In May, her fellow House Republicans voted her out of her leadership role, lamenting that she continued to reject Trump’s false election claims in public rather than focus all her attention on Biden. Several Wyoming Republicans launched campaigns to run against her, and some potential candidates, including Hageman, met with Trump in Bedminster, New Jersey as he considered whom to back.

Cheney’s vote will now be a clear contrast in the race. Hageman told CNN she would “absolutely not” have voted to impeach Trump after the January 6 riot, and that those who “trespassed or destroyed property should be held responsible for their own actions,” rather than the former president, who she believed was not granted proper “due process.”

“The FBI has already investigated and concluded that there’s no evidence of a conspiracy or grand plan,” she said. “I don’t believe in collective guilt.”

After turning off some Republicans in Wyoming, Cheney has highlighted her record — she voted with Trump over 93% of the time, according to website FiveThirtyEight — and her opposition to Biden on everything from the US withdrawal from Afghanistan to energy issues, gun rights, border security and government spending.

A spokesman for Cheney declined requests for comment. Last week, Cheney told local reporters, “I’m going to run on what I’ve produced and delivered for the people of Wyoming.”

The congresswoman also went on the attack, saying Hageman took an oath as a member of the Wyoming Bar, and “is abandoning that principle, sacrificing that oath, abandoning her duty to the people of Wyoming in order to pledge loyalty to Donald Trump.”

Some Wyoming Republicans told CNN they admired Cheney and would continue to support her.

“She stood up to Trump when that needed to be done,” said Scott. “She had the courage to do that.”

“She stood by her country, her oath, the Constitution and her heart, and she stood up to the cult of personality driving a wedge in the Republican Party,” added state GOP Sen. Cale Case. “She is smart, brave and a patriot.”

But pro-Trump forces are aligning against her.

‘Wyoming is in my blood’

Hageman, a lawyer who has challenged the federal government on water rights and natural resources, has run for statewide public office before, finishing third in Wyoming’s 2018 Republican primary for governor. Her family has been in the state for generations; her father, the late state Rep. James Hageman, was a longtime legislator. In reflecting on her race, she recalled how she felt looking at the crowd during her campaign launch, and seeing her brothers, sisters, nieces and nephews.

“I think that I was born and raised for this moment in time, and it is to protect the future for those people,” Hageman said. “I have spent much of my adult life, much of my professional career, fighting for and protecting Wyoming.”

In a sign of the strength of her candidacy, three House GOP candidates — Air Force veteran Bryan Miller, Cheyenne businessman Darin Smith, and state Rep. Chuck Gray — suspended their House campaigns after she jumped into the race with Trump’s endorsement.

Wyoming’s two GOP senators also don’t seem to be coming to Cheney’s aid, even though they serve with the congresswoman. Sen. John Barrasso told CNN that he plans to stay neutral in what he expects to be a “spirited” primary contest, noting that “the President has made an endorsement; that will carry an impact.”

In his endorsement, Trump said Hageman also has “the support and respect” of Wyoming Sen. Cynthia Lummis, though Lummis told CNN she has “no idea” if she’s going to endorse a candidate in the race. The senator’s spokesman, Darin Miller, told CNN, “While Senator Lummis is not making an endorsement at this time, she believes President Trump has made an inspired choice in backing Harriet Hageman.”

Still, state Sen. Anthony Bouchard and a few other House GOP candidates have remained in the race. Some Trump supporters were dismayed that the former President chose Hageman, citing her involvement on Cheney’s leadership team during her brief 2014 Senate campaign, donations to Cheney’s congressional campaigns and pictures of the two women at various events. In 2013, Hageman defended Cheney, telling The Associated Press that her family had a long history in Wyoming and that criticism of her upbringing in Virginia was a “distraction” from the issues of the Senate race.

But after Cheney’s conduct over the past year, Hageman’s tune changed.