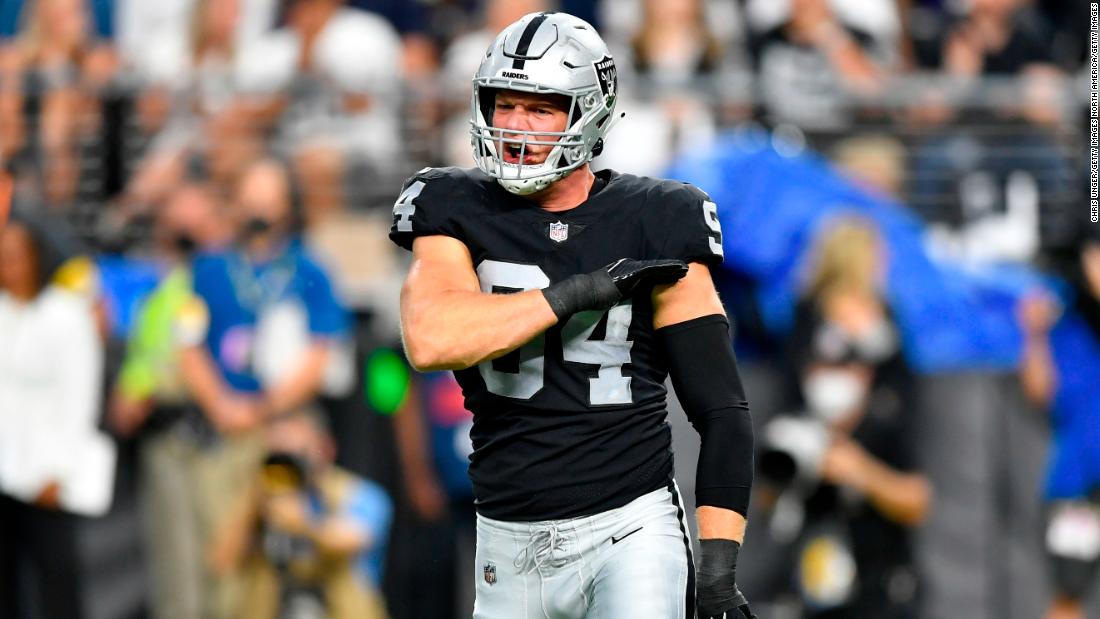 Nassib starred in the Raiders’ thrilling 33-27 win over the Baltimore Ravens — the first game with fans at Allegiant Stadium — and produced a decisive strip sack on Ravens quarterback Lemar Jackson in overtime.

That play set up the game-winning touchdown for the Raiders as wide receiver Zay Jones caught Derek Carr’s 31-yard pass.

“It was really special. I’m really happy that we got the win on the day that kind of made a little bit of history which was really nice to do,” Nassib told reporters.

“Had a lot of people come before me in the LGBTQ community that helped me get to where I am. I’m super thankful for that. I can’t wait to get to Pittsburgh next week and keep this thing going.”

READ: Green Bay Packers ’embarrassed’ in humbling loss while Patrick Mahomes leads Kansas City Chiefs to comeback win
Earlier this year, 28-year-old Nassib, who has played for three teams over five years in the NFL, became the first active player in the history of the league to announce that he is gay.

Asked about his sack on Jackson, Nassib added: “The ball is everything. Getting turnovers is the make or break of a good defense … I was glad I could get the ball out in a really clutch situation.”

In a rollercoaster Monday Night Football season opener, the Ravens moved into an early 14-0 lead, only for the Raiders to claw their way back time and again, tying the game on three separate occasions in the fourth quarter.

With seven seconds of the fourth quarter remaining, Daniel Carlson nailed a career-long, 55-yard field goal to tie the game at 27-27.

The Raiders appeared to seal the win on a Bryan Edwards catch and dive over the goal line in overtime. It was ruled a touchdown on the field, sparking wild celebrations, but replay review showed Wilson was down before the ball crossed the goal line.

As the Raiders continued to push for the win, a throw from Carr was deflected and intercepted in the endzone by Anthony Averett.

However, the Ravens’ joy was short-lived as Nassib sacked Jackson, forcing a fumble that was recovered by Darius Philon, before Carr found Jones for the game-winning touchdown to the delight of the home fans.

“It was bananas,” Nassib said of the atmosphere, adding: “We loved the enthusiasm, it was absolutely incredible that the fans are back. This was my first experience of Raiders fans — by far the best NFL fans I’ve ever seen.”