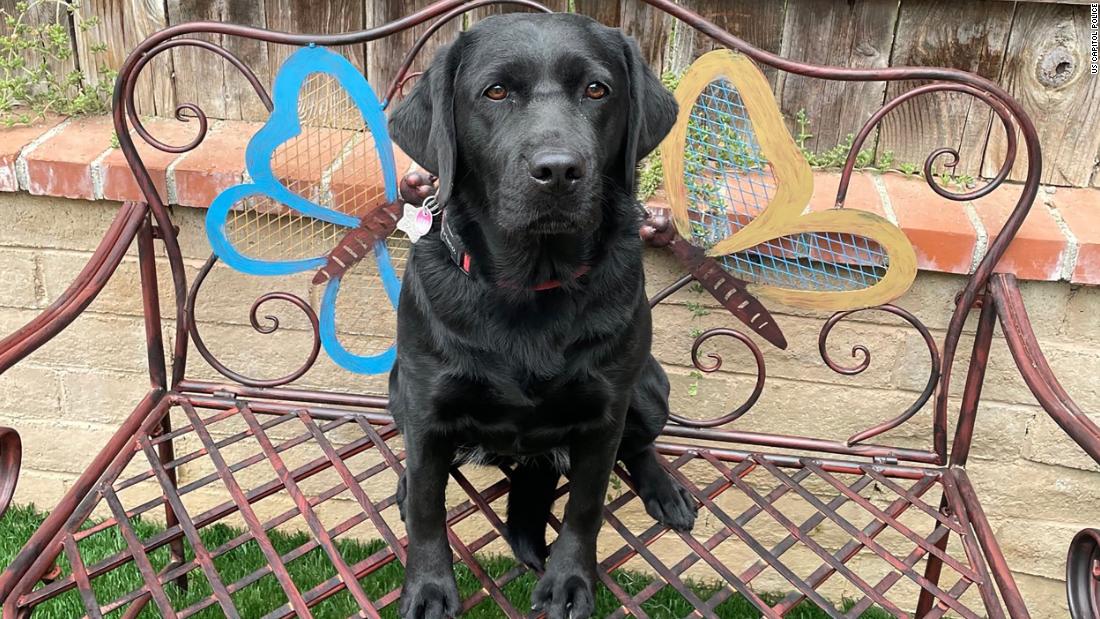 Since June, Lila has officially served as a peer support dog for the force, an emotional comfort animal who is part of a broader effort to connect officers with resources and support services they may need — not just in the wake of the January 6 riot at the US Capitol, but also to deal with the stress and the unpredictability of the job.

“The peer dogs were something that we saw came in for us after the 6th,” said Jeffrey Albanese, a member of the USCP First Responders Unit and an active member in the peer support program. “To have Lila here now and have our own dog. It really is just a godsend.”

On January 6, USCP Officer Caroline Edwards was holding the line on the West Front of the US Capitol as hundreds of people came tearing through the barricades where she was standing. From there, it was hours of hand-to-hand combat she describes as nothing short of “a war zone.” Edwards suffered a traumatic brain injury and in the subsequent months says she has at times struggled to recover from both the emotional and physical traumas of that day.

But Edwards — like a lot of her colleagues — has found that Lila is making a difference.

“She has helped with hard events that we have had. We brought her in for Brian Sicknick’s birthday,” Edwards said referring to a fallen officer who died after fighting on the West Front just one day after the insurrection. “We brought her to roll call for his shift, and it just kind of helps people forget for a little bit.”

Lila is part of a team along with 4-year-old yellow lab Leo intended to not only give officers a smile, a wagging tail and some affection from a pup, but also be a catalyst to start conversations with officers who may be reluctant to outright ask for help or assistance when they are in need.

“She serves a dual role,” said her caretaker and wellness coordinator Dimitri Louis. “She helps to lower anxiety and helps with emotional well-being in general, but she also very good at helping us promote some of the other wellness resources that we have available for the department. … She allows us to go places that we normally otherwise wouldn’t go, have conversations that we normally otherwise wouldn’t have.”

Lila started her life in training with a different purpose, but a weakness for squirrels helped bring her to the Capitol.

Support dogs have played an increasingly vital role on Capitol Hill since January even before Lila and Leo became official members of the team. In April, just as the Capitol complex was beginning to recover from the events in January, Officer William “Billy” Evans, an 18-year veteran of the Capitol police force, was killed in the line of duty when a vehicle rammed a barricade outside the US Senate. After his memorial service, several support dogs including Officer Clarence, a St. Bernard, were dispatched to help comfort officers and the entirety of the Capitol Hill community.

“They had dozens of support dogs there that day and they were just going through the line and for a moment, you weren’t at another officer’s funeral, you were petting a dog,” Edwards said. “To me, that’s been the most significant thing having them there at those events like that just helps to ease the sadness, and it makes you think of something good.”

For now, Lila is largely dispatched by appointments and when the force anticipates there will be a need, but officers say Lila may also become a resource for other departments in crisis too, a way to pay it forward for the support that USCP received in the wake of January 6.

“We’ve all had bad days,” Albanese said. “The minute a dog walks into a room, even for a minute, you kind of forget about it.”

Lila is also just a part of the larger effort on Capitol Hill to give officers more support. Since January 6, the job has become more difficult, and officers have worked to build out a peer support program to address some of the challenges officers face day to day.

“The inspiration came from other programs after the 6th and how they came and helped us,” Albanese said. “Somehow we have to find a way to pay it forward to these groups who were here for us.”

As for Lila, she’s continues to earn glowing reviews.

“The therapy dogs provide an additional opportunity for people to reach out to dogs, to other member of Congress,” Pennsylvania Democratic Rep. Mary Gay Scanlon told CNN. “I know there is bipartisan support for therapy dogs.”