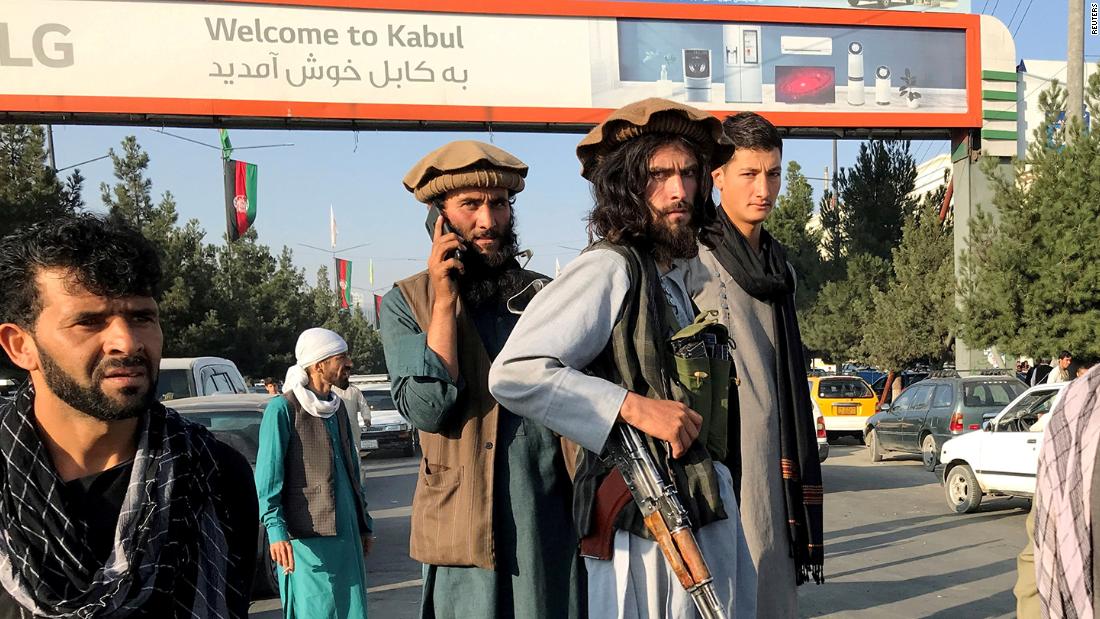 The Taliban says it has changed, promising that women living under their rule will have more rights this time around. But it appeared that the people painting over the signs were not taking any chances.

When the Taliban last ruled in Afghanistan 20 years ago, women were barred from public life and only allowed outside when escorted by men and dressed in burqas.

The disappearing pictures of women were just one sign of the new reality Kabul woke up to on Monday.

The city was still in shock at the blistering speed with which the Taliban had managed to take over, its streets eerily quiet and gripped by fear, with noticeably fewer women out and about.

The city’s fall to the Taliban was over within hours, with barely a shot fired. Afghan security forces patrolling the presidential palace were replaced by Taliban fighters, and checkpoints were established across the city within hours.

Appearing relaxed and jubilant at their victory, Taliban fighters outside the presidential palace told CNN their main job now was to provide security and make sure there was no looting or criminality during the handover of power.

When asked about smoking bans, mandatory beards and other rules the group has imposed on civilians in the past, the fighters told CNN nothing would be implemented drastically or immediately. At the same time, they shooed away CNN’s chief international correspondent, Clarissa Ward, telling her to stand to the side, because she is a woman.

Afghans are Muslim people and want to live under Muslim law, the Taliban fighters told CNN.

On the other side of the city, at Hamid Karzai International Airport, scenes of desperation were unfolding. Witnesses at the scene told CNN thousands of people were there hoping to board flights out of the country.

Hundreds of people were seen storming the tarmac, clinging onto air bridges and desperately trying to board planes.

One person hoping to get on a flight out of Afghanistan told CNN they feared persecution at the hands of the Taliban when the Americans leave the country.

At one point, the witness told CNN, they managed to get inside the airport, where they saw US soldiers telling Afghans to “stay back.”

“The US need to take us with them. Once they’re gone we will be left behind forever,” the witness said.

The witness said they went back outside the airport to try to pick up their family, and were prevented from re-entering by the Taliban.

The strange mixture of calm and fear seen in Kabul Monday has been the typical mood in towns and cities across Afghanistan that have recently been overrun by the Taliban.

CNN spoke to Afghans in Herat and Kunduz, where some said the Taliban had brought a sense of quiet after weeks of fighting, while others expressed their worries.

Many, though, were hesitant about criticizing the Taliban in such early days of its control.

Ismahel, a 40-year-old shopkeeper in Herat, told CNN over the weekend that normality was returning to the country’s third largest city after it fell to the Taliban on Thursday evening.

“(The) entire city is back to normal, people are living normally (and) shops are all open,” he told CNN, adding that he had seen women dressed in burqas resuming their daily lives.

He said a friend came to his shop on Thursday, warning him of the Taliban’s encroachment and suggesting they flee the city. “We closed the shops and went home. Afterward, we saw that the city fell to the Taliban,” he said.

He added that some people were happy that the fighting and “the sounds of bullets” had stopped after a month. “We feel good after the war finished,” he said.

In Kunduz, which was taken by the Taliban on August 8, 31-year-old Atiqullah said people remained fearful, but were slowly adjusting to the new situation.

“Still people are having fear, although we were told by the Taliban not to be afraid,” he told CNN last week.

Taliban spokesperson Sohail Shaheen told CNN’s diplomatic editor, Nic Robertson, that women and girls will be able to access education “from primary to the higher education.”