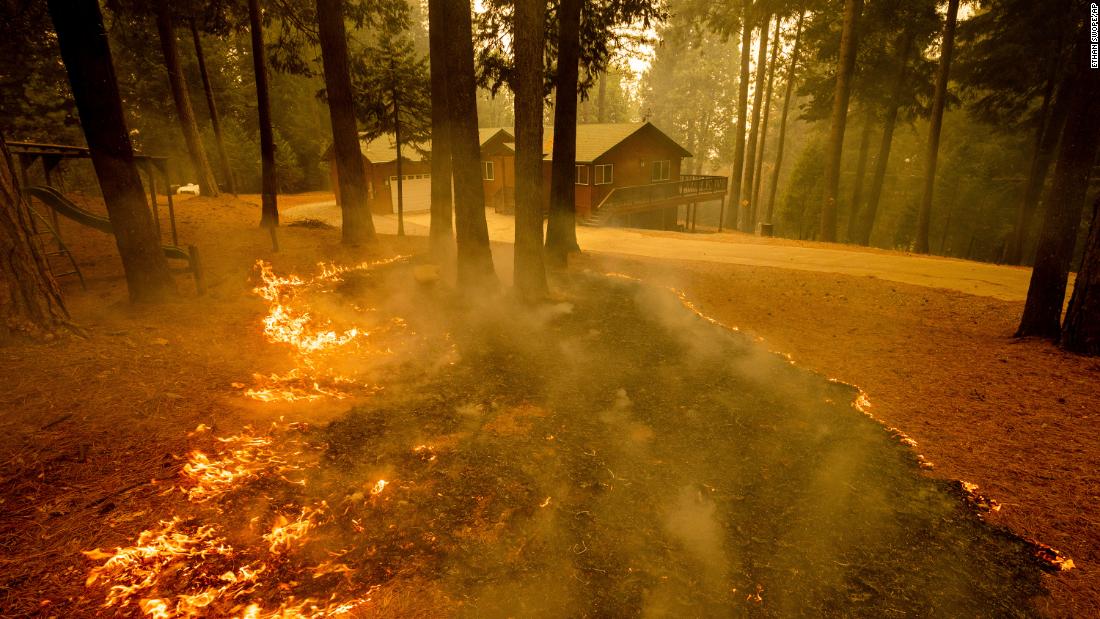 An average of more than 10,000 acres was burned per day in El Dorado County since the fire was sparked Saturday, bringing the total charred land to 68,630 on Thursday as containment remained at zero percent.

The fire had grown 24 times its size from Monday to Wednesday, but its pace slowed Thursday when it swelled by about 5,000 acres.

“The fire activity subsided due to the strong inversion layer early in the day but became active after 3:00 p.m. The fire continues to make runs in the steep drainages with the aid of the large amounts of dead and down material,” Cal Fire said Thursday in an update.

Many areas in El Dorado County remain under either evacuation orders or warnings. The number of people evacuated jumped to about 23,000 from 16,380 the previous day, according to the Governor’s Office of Emergency Services.

Evacuations were also ordered in Lake County, California, where the Cache Fire burned through 75 acres, according to Cal Fire. Some of those orders were lifted as crews contained the fire by 40%.

The fire, about 100 miles northwest of Sacramento, destroyed more than 150 vehicles and 137 structures, of which 81 are outbuildings, local officials said during a news conference Thursday.
California’s wildfire season has been devastating this year. The state’s 12 active wildfires swept through more than one million acres so far, according to the National Interagency Fire Center.

The rapid spread of the fires prompted the US Forest Service to temporarily shutter nine national forests from August 23 until September 6.

“Fires are running very quickly due to the drought conditions, dry fuels, and winds. This makes initial attack and containment very difficult and is even more challenging with strained resources who are battling more than 100 large fires across the country,” Regional Forester Jennifer Eberlien said Thursday in a news release. “These temporary closures are necessary to ensure public and firefighter safety, as well as reduce the potential for new fire starts.”

And as drought conditions worsen in Northern California, an already dire situation is only getting more ominous.

The US Drought Monitor reported that areas under either extreme or exceptional dry conditions, the most severe drought categories, have recently expanded.

Three months ago, roughly 16% of the state was under exceptional drought. Now, nearly 50% is experiencing that, according to the monitor produced by the University of Nebraska-Lincoln, the US Department of Agriculture and the National Oceanic and Atmospheric Administration.

Areas under extreme drought also swelled to about 88% of the state, up from 73% three months ago.

But there is some temporary reprieve.

“As of right now, there is actually no areas of elevated fire risk throughout the West for Friday, but drought conditions will not improve for the West Coast any time soon. These areas are still seeing rapid worsening drought conditions,” CNN meteorologist Robert Shackelford said.

Dozens of fires continue to burn, but rain to bring some relief

Overall, thousands of firefighters are battling 104 large fires in the US. But there’s a glimmer of hope in some regions.

“Most of the remaining drought in these states, while still extreme or exceptional in some locales, is confined to long-term impacts, as conditions are wet in many places on the short-term,” according to the monitor’s report. “While heavy monsoonal rain occurred in Arizona and New Mexico, moderate to heavy amounts were mostly confined to these two states.”

Meanwhile, wildfires have scorched more than 2.5 million acres nationally, according to the National Interagency Fire Center.

California is home to the nation’s largest active wildfire — the Dixie Fire — which has destroyed more than 1,200 structures, including 651 single residences, Cal Fire said. More than 16,000 are threatened.

The fire has seared roughly 700,000 acres as of Thursday with 35% containment, according to Cal Fire. The cause remains under investigation.

“Smoke from other fires nearby did limit activity in some places, but not enough to prevent additional growth. Fuel moistures are historically low which is contributing to the critical fire behavior,” Cal Fire said Thursday.