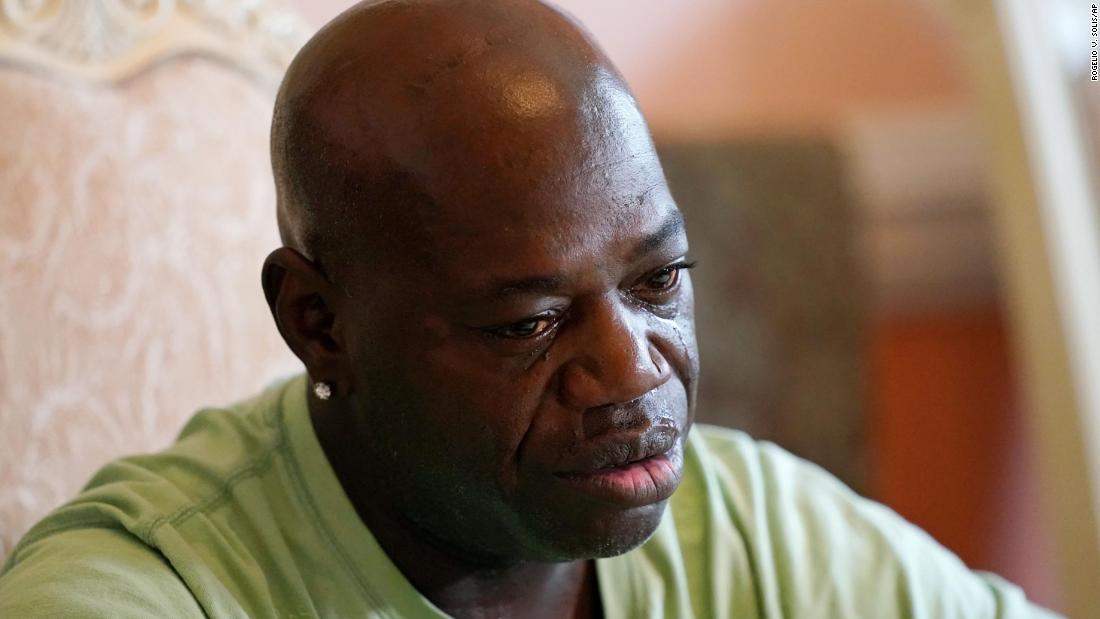 Seven minutes of footage from the officer’s body-worn camera from the May 2019 incident was recently turned over to attorneys for the motorist, Aaron Larry Bowman, pursuant to a court order last week. CNN obtained a copy of that video Wednesday from Bowman’s attorneys.

The trooper in the video, Jacob Brown, was charged in December with aggravated second-degree battery and malfeasance in office. He has not entered a plea. State prosecutors said that case remains on hold as federal investigators are conducting their own investigation into Brown’s actions.

Attempts to reach Brown were not successful. He doesn’t have an attorney listed. Brown resigned from the state police in March, according to a spokesman.

Body camera footage of Bowman being beaten shows officers running toward other officers who have him on the ground, attempting to arrest him. The body-worn camera footage shows Brown swinging what appears to be a flashlight and repeatedly striking Bowman while he’s facedown on the ground with his hands behind his head for part of the beating as he tells them, “I’m not resisting.”

“Fighting us ain’t gonna help you bud,” an officer says.

“I’m not fighting you,” Bowman responds.

He can later be heard moaning and saying, “They hit me in the head with a flashlight. I’m on dialysis, man, it hurt me. It hurt me. I don’t have nothing.”

The division of the Louisiana State Police where Brown worked, Troop F, is under investigation for potential abuses committed by troopers against Black motorists. That investigation followed the death of Ronald Greene, a Black motorist who died after he was beaten and tased following a car chase that began when Greene didn’t stop for officers.

As part of the probe, investigators are working to determine whether there’s a history of abuse in interactions between troopers in Troop F and Black people, two sources familiar with the process previously confirmed to CNN.

The video was first obtained by The Associated Press. What’s known of the cases involving this unit within the Louisiana State Police is largely the result of reporting by the AP, which has exposed various issues with the conduct and covering up of that conduct by state troopers.

According to court records, as a result of the beating, “(Bowman) sustained multiple lacerations,” that include “a cut to the top of his head, a fractured arm, and broken ribs amongst other ailments.”

Ron Haley, one of Bowman’s attorneys, said Brown beat his client with an 8-inch aluminum flashlight. Brown hit him within seconds of initial contact and hit Bowman at least 18 times in 24 seconds, Haley said. CNN affiliate WBRZ reported that an arrest affidavit says Brown went on to strike Bowman 18 times in the span of about 24 seconds.

It wasn’t immediately clear to Bowman’s attorneys or prosecutors that body-worn camera footage of the beating existed.

A statement from Louisiana State Police said the agency found the footage after Bowman’s attorneys filed a lawsuit, adding that after investigators located the footage, they began administrative and criminal investigations.

State police have said at the time of Brown’s arrest “detectives learned that Brown engaged in excessive and unjustifiable actions during the incident and failed to report the use of force to his supervisors.”

The result of the criminal investigation was turned over to the district attorney’s office, and Brown was charged in December. Robert Tew, the district attorney in Monroe, said it is being continued until the US Department of Justice decides whether to charge him with federal crimes.

Last week, a judge in Bowman’s criminal case ordered the video turned over to Bowman’s attorneys.

“Prior to (the investigation into Brown), no one knew about the body camera footage,” said Keith Whiddon, one of Bowman’s attorneys. “When my office learned of it, we filed our motion to ask the state to turn it over, and the judge ordered it turned over in seven days.”

The incident began when an Ouachita Parish Sheriff’s Office deputy attempted to pull over Bowman, while using lights and sirens on his vehicle, according to an affidavit.

Deputies from that agency don’t wear body cameras, according to the district attorney and according to Bowman’s defense attorney.

Bowman fought with at least one of those deputies, according to an affidavit filed in the case against Bowman. According to the affidavit filed by a Ouachita Parish Sheriff’s Office deputy, Bowman “began swinging his arms at me and screaming he did not do anything wrong. (Bowman) then struck me on top of the head with a closed fist.”

Bowman disputed the police version of events in his civil suit. He “asserts that the published police report is fabricated, and aspects of Deputy (Donovan) Ginn’s narrative is untrue.”

CNN’s Evan Perez and Christina Carrega contributed to this report.