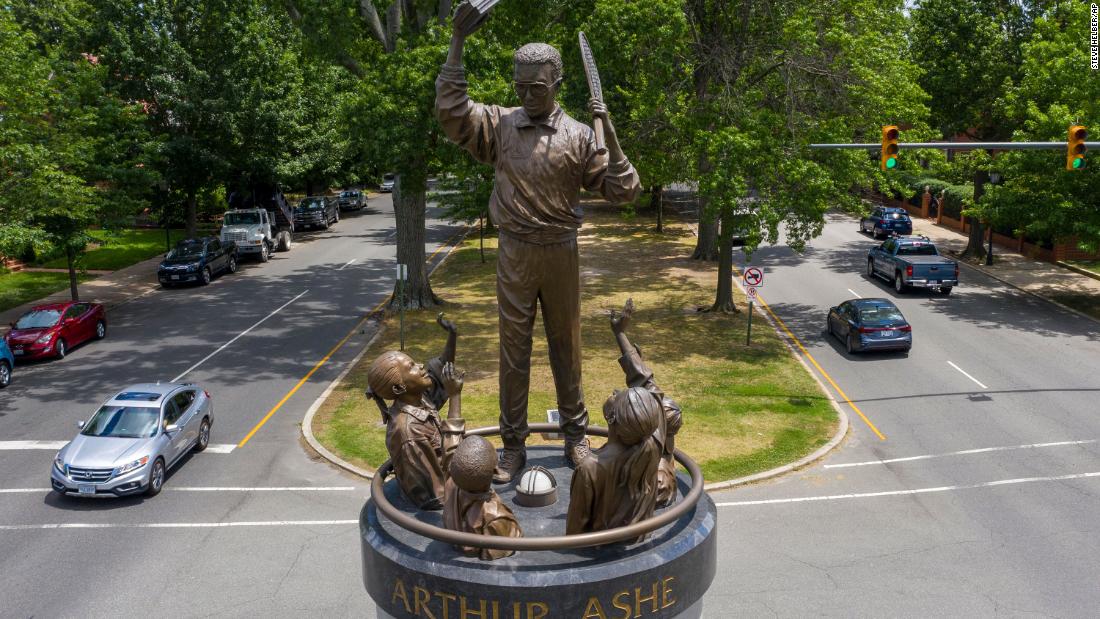 The removal of Lee — the last Confederate statue to be pulled from Richmond’s historic Monument Avenue — makes Black tennis legend Arthur Ashe the lone monument still standing on the street. Ashe was born in Richmond and shattered records in the sport and championed civil rights. A statue honoring him was added to the street in 1996.

Activists, some of whom gathered Wednesday to watch the Lee statue come down, praised the move, saying it was a step toward progress in the movement for racial equality.

The fight to get Confederate monuments removed has gained steam in recent years, with many civil rights activists saying the structures are racist and offensive because they honor Confederate leaders who promoted the enslavement of Black people.

Democratic Gov. Ralph Northam had announced plans to to remove the Lee statue last year, but it was delayed by a court battle with Richmond residents who sued, arguing that an 1890 deed and an 1889 General Assembly joint resolution prohibited the governor from directing the removal of a state monument from state property.

The Virginia Supreme Court recently ruled against the residents.

“The public monuments reflect the story we choose to tell about who we are as a people,” Northam said. “It is time to display history as history, and use the public memorials to honor the full and inclusive truth of who we are today and in the future.”

Lawrence West, founder of Black Lives Matter RVA, told CNN that it is “very satisfying, gratifying” to see the Lee statue gone in the former capital of the Confederacy.

“Robert E. Lee standing here on Monument Avenue is very symbolic to the Confederate mindset, you know the levels of oppression that people feel on a regular day-to-day basis,” West said. “With the coming down of the monument it is also a part of coming down with those types of ideals. It brings some closure to the conversation, ‘It’s OK to be racist’.”

Alexcia Cleveland, a Richmond-based public historian, said she hopes the removal of the statue demonstrates the importance of challenging narratives that fail to recognize the underlying issues with race in America. One example, she said, is the need to challenge states removing critical race theory or racial education from schools.

“There’s all sorts of narratives that people need to pay attention to and actively challenge,” Cleveland said.

Here is a look at other Confederate monuments that have been removed since last year:

In July, bronze statues of two generals were removed from public property in Charlottesville, Virginia, almost four years after they were a flashpoint for a violent “Unite the Right” rally that left one person dead. The equestrian monuments were of Lee in Market Street Park and Thomas J. “Stonewall” Jackson in Court Square Park.

The City Council voted in June to take the statues down after a three-year court battle.

Monuments were removed in Georgia

In February, officials removed two Confederate monuments including the stone monument “1861-1865 Lest We Forget” outside the Gwinnett County Courthouse in Lawrenceville and one of Confederate Gen. Joseph E. Johnston, which sat in downtown Dalton.

The Lawrenceville monument had been vandalized at least twice last year. Officials placed it in storage until court proceedings were finished determining its fate.

The monument of Johnston was moved to the historic Huff House by the United Daughters of the Confederacy, which owns the statue.

Prior to those removals, a 30-foot obelisk at Decatur Square in Decatur had been taken down in June 2020 after the city argued it’d become a threat to public safety during recent protests.

Lee statue removed from US Capitol

Virginia’s statue of Confederate Gen. Robert E. Lee was removed from the US Capitol in December 2020. It had been there since 1909. Northam said in December that Lee’s statue would be replaced by Barbara Johns, a Black woman who walked out of her high school in 1951 to protest unequal school conditions.

The statue of Lee provided by Virginia was one of several statues around the Capitol depicting Confederate soldiers and officials. Its removal came after House Speaker Nancy Pelosi called for the removal of those statues.

Some were toppled by protesters and officials opted not to reinstall them. Other statues were ordered removed by local officials and lawmakers who agreed with demonstrators that the structures were offensive. Among the statues taken down in the spring and summer of 2020 were: