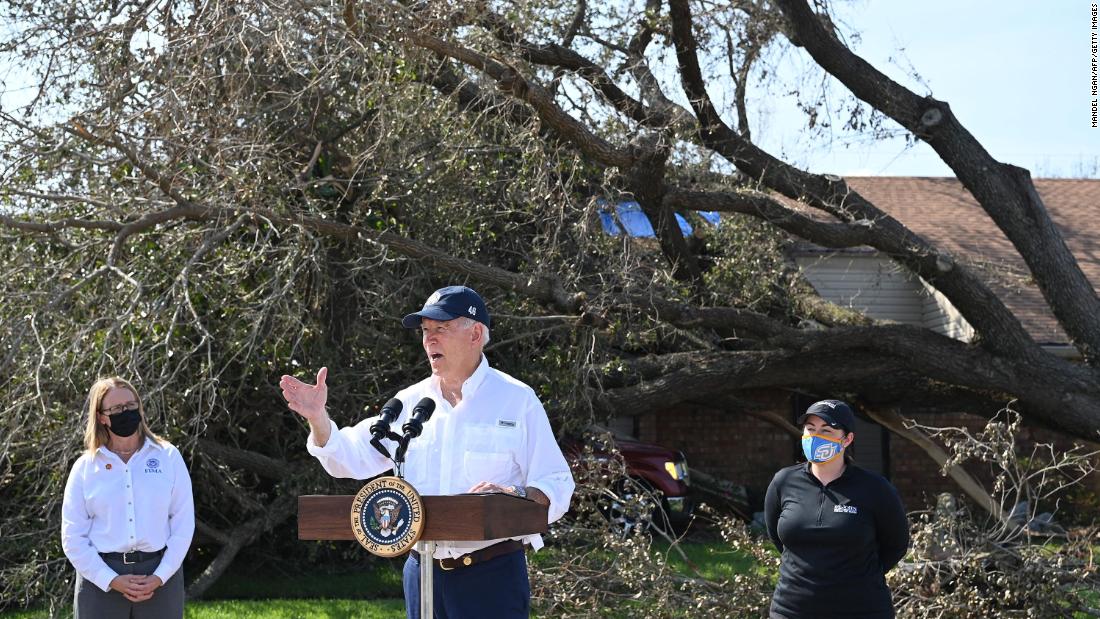 The President will use the trip to highlight the effects of climate change and underscore the importance of climate-resilient infrastructure investments proposed in his legislative agenda.

“President Biden will highlight how one in three Americans have been impacted by severe weather events in recent months, and that no one is immune from climate change,” a White House official said. “He will speak about the economic impacts of extreme weather, while driving home the urgent need for key investments to fight climate change and in resilient infrastructure, critical investments included in the President’s Build Back Better agenda.”

During the visit, which includes stops in Manville, New Jersey, and Queens, New York, the President will also meet with families, first responders and local elected officials.

Biden is expected to “receive an update on recovery efforts and highlight his Administration’s commitment to providing the federal government’s full support for communities impacted by the storm,” the White House official said.

After Ida made its way through Louisiana and Mississippi, its remnants — a tropical depression — led to heavy rain, flooding and tornadoes along the northeast.

Of the dozens killed in the East, many died in flooded homes — including many in flooded basements — or while overtaken by water in or outside their vehicles.

The visit marks the President’s second trip in the span of a week to survey damage brought by the storm. On Friday, Biden visited several sites in Louisiana, which included meetings on disaster response and touring neighborhoods ravaged by the hurricane.

After it swept out of the Gulf and into the Northeast, the rains from Ida wreaked havoc. Major interstates across the Northeast flooded. Water rushed into a number of New York City subway stations, and more than 800 subway riders had to be evacuated. As of Monday, nearly half a million businesses and homes in Louisiana remained without power, according to PowerOutage.US.

Biden made the case for more climate-resilient infrastructure during his visit to Louisiana, pointing to his proposals to Congress.

“Things have changed so drastically in terms of the environment. We’ve already crossed certain thresholds. We can’t build back roads, highways, bridges, anything to what it was before. We gotta build back to what it is now, what’s needed now,” Biden said on Friday. “And I know the heads of the energy companies understand this really well. We have a significant piece of legislation, both the infrastructure bill and a budget thing, a reconciliation bill, that calls for significant investment in being able to deal with what is about to come.”

And state and local leaders are sounding an urgent alarm on climate change and calling for action on infrastructure legislation so states can be better prepared for extreme weather events in the future.

“We haven’t experienced this before, but we should expect it the next time, and that means we have to continue investments in infrastructure, working in partnership with our federal government, and support from (New York Democratic) Senator (Chuck) Schumer and President Biden,” New York Gov. Kathy Hochul said.

The rainfall from Ida broke a record in New York City that had been set just one week earlier, something Mayor Bill de Blasio said is “the biggest wake-up call we could possibly get.”

The trip to the Northeast also comes as Biden contends with multiple crises, including a worsening Covid-19 pandemic, renewed concerns about America’s economic recovery thanks to the latest jobs report, a potential wrench in his infrastructure and spending proposal, fallout from the US withdrawal from Afghanistan and Texas’ new abortion restrictions.