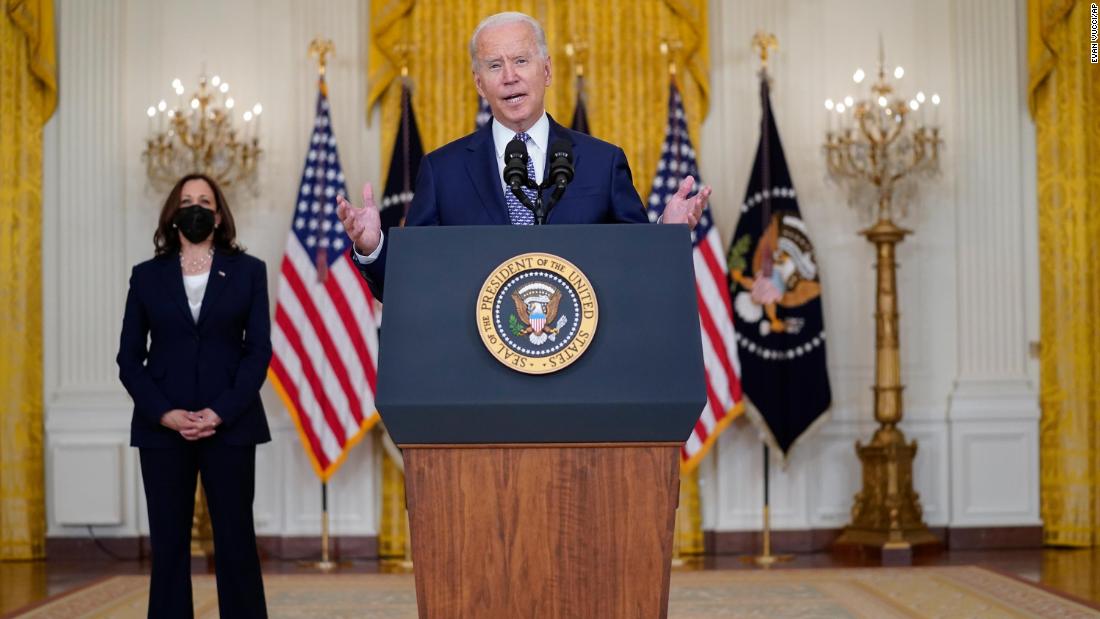 “The death of this legislation was mildly premature,” Biden said during a speech at the White House Tuesday afternoon. “After years and years of ‘Infrastructure Week,’ we are on the cusp of an infrastructure decade that I truly believe will transform America.”

Biden, standing alongside Vice President Kamala Harris, said that he “never believed” critics who have characterized his calls to implement policies in a bipartisan way “a relic of an earlier age.”

The President thanked senators on both sides of the aisle for working together to get the bill passed, saying, “I know it wasn’t easy for the Republicans who supported this bill. You showed a lot of courage and I want to personally thank you for that, and I’ve called most of you on the phone to do just that.”

The legislation, called the Infrastructure Investment and Jobs Act, includes $550 billion in new federal spending over five years. It invests $110 billion in roads, bridges and major projects, $66 billion in passenger and freight rail, $65 billion to rebuild the electric grid, $65 billion to expand broadband internet access, $39 billion to modernize and expand transit systems and $7.5 billion to build a national network of charging infrastructure for electric vehicles.

Among other priorities, the bill also includes $55 billion for water infrastructure, $15 billion of which will be directed toward replacing lead pipes.

The bill passed in the Senate by a wide bipartisan majority of 69-30, with 19 Republicans voting for the bill. Now, the legislation heads to the Democrat-controlled House of Representatives. Timing of a vote in the House is uncertain, but it’s unlikely they’ll take it up until the fall.

Biden, who was scheduled to remain on vacation this week but returned to Washington on Tuesday morning for the Senate vote, reiterated his belief that the legislation is good for the economy. He did not acknowledge a recently released Congressional Budget Office analysis that found that the bipartisan infrastructure plan will “add $256 billion to projected deficits” between 2021 and 2031.

“Everyone from union to business leaders to economists left, right and center believe the public investment contained in this bill will generate more jobs, higher productivity, higher growth for our economy over the long term,” he said.

Biden’s allies have said the budget office’s score did not account for all the ways the bill offset costs.

House Speaker Nancy Pelosi has signaled that the Senate-backed bill won’t be taken up in the House until a larger, separate package is passed without GOP votes under the budget reconciliation process.

Democrats unveiled the budget resolution for their $3.5 trillion package on Monday, and the Senate is expected to move to consideration of the plan as soon as Tuesday. The package includes a number of measures to expand education, health care and child care support, address climate change and invest in infrastructure.

Republicans have balked at the size of the plan, which includes several measures outlined in the $1.8 trillion American Families Plan proposal Biden announced in April.

On Tuesday, Biden made clear that the work is far from done.

“The bill now has to go to the House of Representatives where I look forward to winning its approval. We have to get to work on the next critical piece of my agenda, my Build Back Better plan,” the President said.

Biden said he continues “to be an optimist” about getting both the bipartisan infrastructure package and the budget resolution on his desk to be signed into law.

But pressed on why he wouldn’t call on the House to immediately take on the bipartisan package for a vote, Biden laughed, adding, “We’ll get it done. I’ll get both.”

This a breaking story and will be updated.