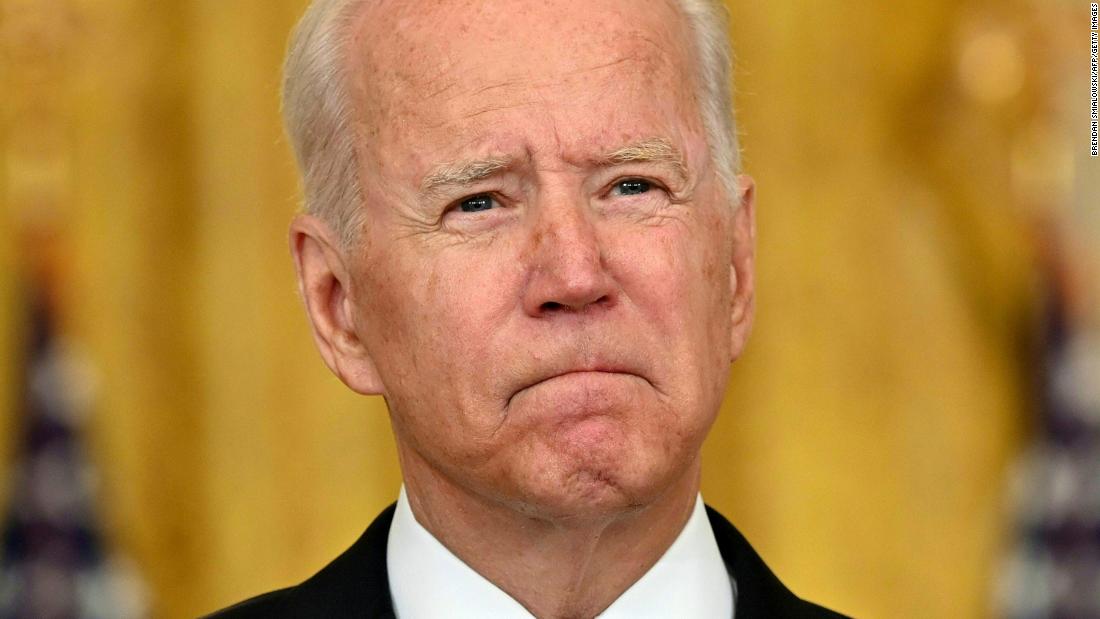 An intelligence assessment produced within the last month assessed that the Taliban were pursuing a total military victory in Afghanistan, a source familiar with the intelligence said, despite ostensibly negotiating for peace in Doha and even as the administration continued to express confidence in those talks.

Some officials insist that Biden got bad advice from some of his top military and intelligence advisers. One White House official pointed to Joint Chiefs Chairman Gen. Mark Milley’s comments from three weeks ago, when he suggested the Afghan forces had the capacity to fight for and defend their country, and that a Taliban takeover was not a foregone conclusion.

Military officials, in turn, have said they were actually prepared for the worst and had been urging the State Department for weeks to begin withdrawing embassy employees in Kabul. Pentagon officials used the words “frustration” and “sh*tshow” to describe their feelings about Washington and Kabul.

The officials said they had warned the State Department that a last-minute emergency evacuation — if needed — would be more difficult the more staffers remained.

While the embassy had slowly been drawing down personnel over the last few months, the effort to remove a bigger group of embassy personnel began only late last week with the Taliban near the gates of Kabul. The scenes evoked images from Saigon in 1975, a comparison the administration promised would not happen.

Pentagon spokesman John Kirby said on Monday that the Defense Department “absolutely” did plan for “the possibility that the Taliban would make significant gains throughout the country,” but he declined to say whether the President had been briefed. “One of the things that we couldn’t anticipate and didn’t anticipate was the degree to which Afghan forces capitulated sometimes without a fight,” said Kirby.

A State Department official acknowledged there had been real friction with the Pentagon in recent weeks as the department resisted the military’s advice to close the US Embassy in Kabul sooner. A senior administration official, however, said they were operating off the intelligence community assessments that the fall of Kabul was not imminent. The State Department, therefore, felt it was making appropriate decisions, the official said.

A senior intelligence official issued a statement on Sunday defending the community’s work, saying that “we have noted the troubling trend lines in Afghanistan for some time, with the Taliban at its strongest, militarily, since 2001. Strategically, a rapid Taliban takeover was always a possibility.”

Diplomats are frustrated, too. “Home. Angry,” said one who just returned from Afghanistan. Two other US diplomats who served in Afghanistan said the chaos could have been averted, or at least mitigated, if action had been taken sooner to get people out.

Another White House official said the NSC held 36 deputy and principal level meetings on Afghanistan between April 13 and last weekend that were focused on over-the-horizon counterterrorism planning, special immigrant visas for Afghans, and embassy security. Eight of those meetings were focused exclusively on humanitarian scenario planning, the official said, and the senior-most members of Biden’s national security team have continued to meet daily on Afghanistan. The White House in early August also convened a tabletop exercise about evacuation scenarios “to pressure-test every element of our planning through August 31,” the official said.

But the diplomats who spoke to CNN said that while the Biden NSC has a lot of meetings, they don’t make many rapid decisions—and in this situation, they believe, valuable time was lost.

In a statement, a senior administration official said Biden’s national security team “has been engaged in months of extensive scenario planning, and was ready for this challenge.” Despite the rapid collapse of Afghan forces and government, the official noted that the US Embassy was closed “safely and swiftly, following an efficient and safe military draw down that largely concluded earlier this summer.

“We are now laser focused on getting people out safely and swiftly, including American citizens, local Embassy staff and partners and other Afghans,” the spokesperson said.

In defending the withdrawal, Biden and Pentagon officials have repeatedly returned to the capabilities and advantages of the 300,000-strong Afghan National Defense and Security Forces. Yet the notion of a coherent Afghan military that could hold its own in a fight appears to have been an $88 billion fiction — the amount of US taxpayer dollars spent on building up the Afghan military and police. Moreover, it is a myth the US should have seen coming, experts say.

John Sopko, the special inspector general for Afghanistan reconstruction, warned repeatedly over the years that the Afghan military suffered from corruption, drug addiction, theft and tens of thousands of “ghost soldiers.” These fictitious soldiers would be added to payrolls so corrupt officers could collect their salaries. In October 2019, the US helped eliminate some 50,000 of these soldiers from the Afghan military books.

That was but one problem of many that plagued the Afghan military and police force. Officials sold weapons for cash, stole the salaries of subordinates and sometimes left them without enough food or water, as was documented in quarterly special inspector general for Afghanistan reconstruction reports for years.

Without US military support and US contractors, Sopko warned in March following the release of the 2021 High-Risk List report for Congress that “the survival of the Afghan state as we know it” was in peril. He was correct, and it went down far faster than anyone had expected.

Even as the Taliban avoided attacking US forces, they carried out a brutal and ongoing assault on the Afghan military, conducting up to 120 attacks a day for the past year. The onslaught set the stage for what was to come as US forces pulled back and handed over bases and equipment to the Afghan forces — a lightning-fast blitz across the country in which Afghan forces often surrendered without a fight or fled their positions.

At the end of July, as the Taliban began to advance, Milley said Afghan forces were retreating from outlying provinces to consolidate their forces and protect population centers, including Kabul and provincial capitals.

The picture now is far clearer and more disturbing: Afghan forces were crumbling on the periphery before they crumbled around the major cities, culminating in the Taliban takeover of Kabul meeting with little to no resistance.

‘A complete collapse of morale’

Intelligence assessments have been warning for years “that in the absence of the US military the Taliban would continue to make gains in Afghanistan,” Senate Intelligence Chairman Mark Warner, a Virginia Democrat, said in a statement on Monday.

But US officials also overestimated the Afghan security forces’ will to fight and the risk of a full psychological collapse among those forces once US troops withdrew. Over the last several weeks, assessments continued to reflect the growing concern over how fast the Taliban could take control of Kabul. Earlier this summer, intelligence assessments estimated it could take about six months for the government of Afghanistan to collapse. Just a week before Kabul fell, one assessment estimated the Taliban might take control of Kabul just 90 days after the US left, which also proved way off base.

“I think the lack of combat really highlights that this was not about the capabilities, the training, the equipment of Afghan forces,” said Seth Jones, director of the International Security Program at the Center for Strategic and International Studies. “My assessment is, in conversations with Afghan officials over the last couple of days, that one of the key factors was a complete collapse of morale. If you’re going to fight for your government and your country, and you’re willing to die for it, you’re going to have to think there’s a chance of winning.”

It also became clear that the Taliban had “various types of intelligence, military, diplomatic backing from virtually every government in the region, probably with the exception of India,” Jones said, pointing to China, Pakistan, Iran and Russia, whose Military Intelligence Service, the GRU, has been assisting the Taliban.

“From what I’m told from senior Afghan officials, is they did their own little cost-benefit calculation,” Jones said. “They’ve got no US backing anymore, the Taliban has got almost all the major countries in the region providing some combination of diplomatic, military, intelligence support. The game was up, and their chances of winning a war then were slim to none.”

That psychological element is difficult for the intelligence community to measure in advance, said one person familiar with the internal debates.

“These non-technical issues, like a certain population’s willingness and affinities, are very challenging to predict,” this person said. The fog of war amid escalating chaos makes that even harder, they added, when the intelligence community is trying to keep up with agents who are in a rapidly spiraling security environment and potentially compromised signals intelligence.

In the absence of reporting about the speed of the Afghan forces’ collapse, then, many officials believed there would be a prolonged civil war that could buy the US and its allies more time.

The administration’s assessments of the security situation in Afghanistan have been so off that the Pentagon was saying as recently as Friday that Kabul was not under threat of imminent collapse. By Sunday, Taliban insurgents had entered the city, Afghanistan’s President had fled the country as his government collapsed and the US was surging thousands of troops to Kabul to facilitate a safe evacuation of US Embassy employees.

By Monday morning, at least two people were dead amid the chaos as desperate Afghans flooded Kabul airport and clung to departing US military planes.

“We were clear-eyed about the risks. We planned for every contingency,” Biden said on Monday. “But I always promised the American people that I will be straight with you. Truth is, this did unfold more quickly than we had anticipated. So what’s happened? Afghanistan political leaders gave up and fled the country. The Afghan military collapsed, sometimes without trying to fight.”