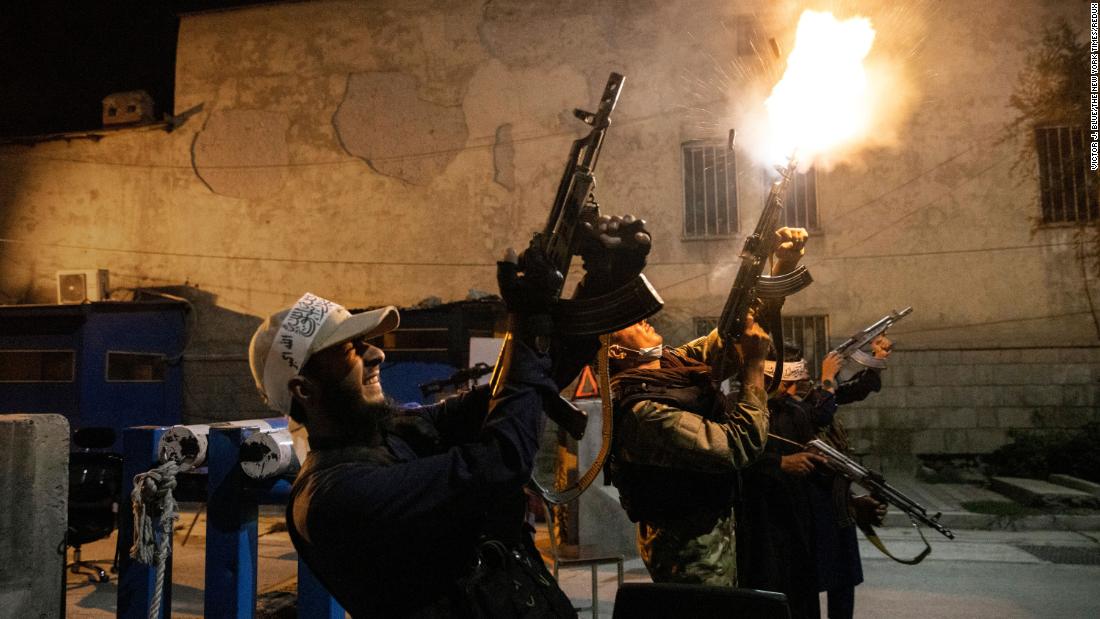 It was once a stronghold for the mujahideen fighting the Soviets and is now the seat of the resistance movement. Fighters in the province also held out against the Taliban in the late 1990s during their rule.

Taliban spokesman Belal Kareemi told CNN Sunday that the group’s militant fighters have taken all districts of Panjshir province except for the capital of Bazarak and Rokha districts, which remain under NRF control.

The spokesman claimed the enemy has suffered “heavy casualties,” including among their commanders, and that the Taliban hope to be able to “clear Panjsher as soon as possible.” Taliban fighters are currently advancing toward Rokha and Bazarak, Kareemi added.

But resistance fighters appeared to rebut the Taliban’s claims, with NRF spokesman Fahim Dashti tweeting Sunday that the Paryan district of Panjshir was “completely cleared” of the Taliban.

“At least 1,000 terrorists were trapped due to the cutting of their way out. All the attackers were either killed, surrendered or captured by locals with help from resistance fighters as they fled and retreated. Many of these prisoners are foreigners and most of them are Pakistanis‌,” Dashti said.

Earlier Sunday, an NRF spokesman said: “We have allowed them (Taliban) to enter the valley intentionally and now they are trapped. Fighting is going on in the northern most district of Panjshir (Paryan) and the southern most district (Anaba).”

“This is a tactic we have used from our playbook from the 1980s when the Soviets entered the Valley. The NRF is all over Panjshir and the Taliban have suffered heavy casualties tonight,” the spokesman added.

CNN has not been able to independently verify the overall casualty figures in the latest rounds of fighting.

Back in Kabul, Afghanistan’s Ariana Afghan Airlines resumed flights between the capital and Herat, according to its official Facebook page on Sunday.

In subsequent posts the airline also confirmed operations between Kabul and the cities of Kandahar and Mazar-i-Sharif — which Qatar’s Ambassador to Afghanistan Saeed bin Mubarak Al-Khayarin Al-Hajar witnessed, according to a Qatari foreign ministry statement on Saturday.

Also on Sunday, the head of the International Committee of the Red Cross (ICRC) arrived in the country for a three-day trip.

“Arriving now in #Afghanistan,” Peter Maurer tweeted along with a video message in which he said, “Today I’ll arrive in Afghanistan where almost 40 years of conflict have caused so much suffering and misery.”

Maurer said he will visit ICRC operations and talk to Afghans to better understand their short, medium and long-term needs. He added that he will talk to authorities to ensure that “neutral, impartial and independent humanitarian action will continue to be the basis” of the ICRC’s work, and for further scaling and increasing of its operations.

While in Afghanistan, Maurer will also visit ICRC-supported medical facilities and rehabilitation centers for victims of violence and disease, according to an ICRC press release on Sunday.

“Before even visiting I wanted to pay tribute to ICRC’s and Afghan Red Crescent’s people on the ground — who over the last decades have done everything to keep humanity at the core of their work and to counter the effect that war and violence becomes a way of life.”

Taliban talks are continuing over the formation of a transitional government but a decision from the Taliban-run education ministry Sunday is signaling life will change for civilians as the group cements its control.

The Ministry of Higher Education approved a proposal on the separation of male and female university students for the new semester, which begins Monday.

It signed off on a detailed proposal submitted by Afghanistan’s union of universities, which represents 131 colleges and universities around the country.

According to the proposal, “All female students, lecturers and employees are obliged to observe Hijab according to Sharia.” The hijab covers the hair but not the face.

Female and male students must enter their college through separate entrances. Mixed classes will only be allowed where the number of female students is fewer than 15, and the classroom must be divided by a curtain. Newly created classes at private universities should be separate for boys and girls, the proposal says.

There are also rules to ensure male and female students do not enter the classroom together. In addition, according to the proposal, “All universities are obliged to designate a separate area for female students to perform their prayers.”

“In the future the universities should try to hire female professors for female students. In the meantime, efforts should be made to appoint elderly professors who are well-known for being trustworthy to teach female students,” the proposal says.

Waheed Roshan, the Vice-Chancellor of the private Bakhtar University in Kabul, said the institution would comply with the proposal but said that for many colleges the logistics would be challenging. He told CNN that Bakhtar — where about 20% of the 2,000 students are girls — could hold classes for boys and girls in separate shifts. But other colleges might struggle with putting partitions inside their classrooms, Roshan said.

CNN spoke to several female students about the new regulations. Sahar, 21, who is studying political science, said she said was happy that the Taliban had not banned girls from attending higher education, but described the new rules as extreme.

“There are so many female students in Kabul who grew up in a free environment where they had the opportunity to choose what to wear and which university to attend or whether to sit in a classroom with the boys or not, but now it would be too difficult for them to adapt to these extreme rules,” she said.

She said that even before the Taliban took over girls wore modest clothes and that she did not see the necessity for further restrictions. She also said she would try to resume her studies under the new rules, but wasn’t sure if she could continue for long.

Ziba, another student in her early 20s in Kabul, said she was planning to abandon hopes of graduating from the university citing the fluid security situation and over concerns the Taliban might impose stricter conditions in the future. She said it was better to stay at home. She asked CNN not to use her real name.

But Mina Qasem, 19, who graduated from high school last year said that she was excited to start university. “I will put on any type of Hijab they ask me to wear as long as they keep the universities open for the girls. I am so excited to start my next chapter of life and my sister who is going to finish high school this year will also apply for one of the private universities at the end of the year.”

Mina added that if girls wanted to have a voice in the future, they had to get educated whatever the circumstances.