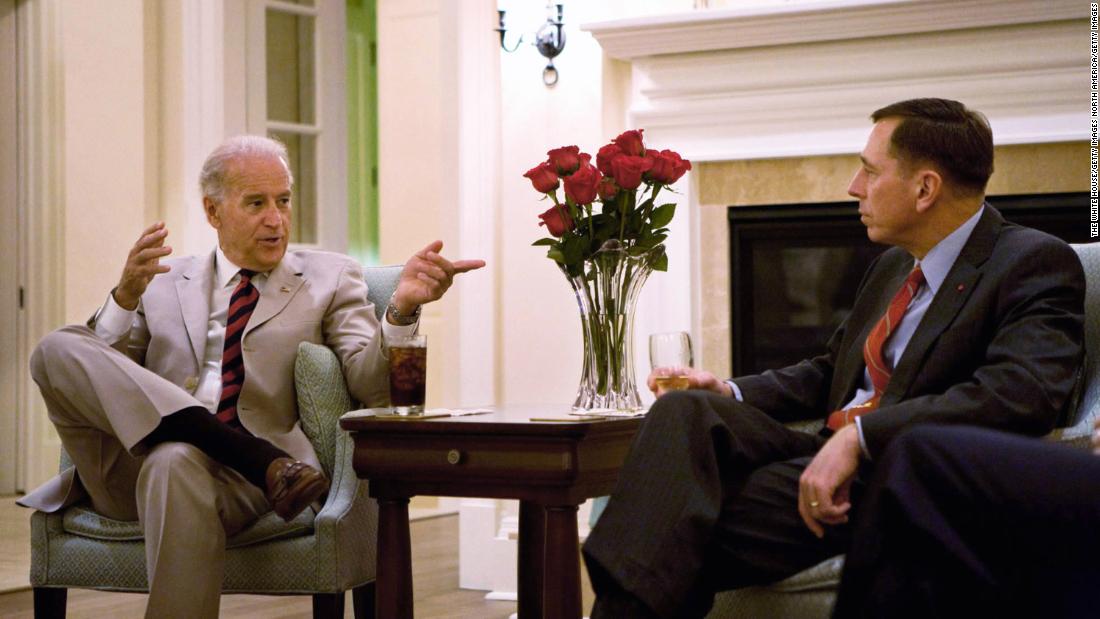 In 2009, President Barack Obama convened an intensive review of US strategy in Afghanistan. After seven years of war, the allied effort there was floundering. Attention and resources had been shifted to Iraq, while the war in Afghanistan drifted. Obama wanted to chart the way forward.

He led nine fateful meetings in the Situation Room, in the basement of the White House. The Pentagon, Defense Secretary Robert Gates and Secretary of State Hillary Clinton strongly advocated for sending 40,000 troops to repel a resurgent Taliban. They said it would create space for democracy and civil society to take root.

Central to the strategy was training the Afghan army and police so they could defend the country themselves.

Biden didn’t buy it. In an animated conversation in his office before the meetings began, he told me that the mission was drifting from its origins and that the Pentagon plan, pointedly leaked to the media before it even hit the president’s desk, would result in a quagmire.

“Our objective in going there was to destroy al Qaeda so why the hell are we plunging into COIN here?” the vice president asked, using the acronym for the type of elaborate counter insurgency program the military was proposing. “The president asked me to play the bad cop here and that’s what I’m going to do.”

In sometimes heated exchanges over the coming weeks, Biden sharply questioned Gates and the military architects of the plan. Capturing Osama bin Laden and destroying al Qaeda should remain the focus, he argued, and could be accomplished with a much smaller counter-terrorism force in the region. To commit to a larger counter insurgency would bog us down in a costly, open-ended war.

Biden’s passion sprung from hard experience. He entered the Senate during the final years of Vietnam, when that long and painful war was effectively lost but not over. He had cast a vote in 2002 authorizing the war in Iraq that he quickly came to regret.
In the end, Obama agreed to send 30,000 additional troops but with benchmarks, including for the training of Afghan military and police, and a timetable for winding down the surge and handing responsibility for defending Afghanistan to the Afghans.
It wasn’t the outcome Biden had hoped for, and he bore some scars from the fight. The Allied Commander in Afghanistan, Gen. Stanley McChrystal, was fired after a reporter overheard the general’s aides crudely ridiculing Biden in McChrystal’s presence. Gates would write in his 2014 memoir that while Biden was “a man of integrity,” who was “impossible not to like…he has been wrong on nearly every major foreign policy and national security issue over the past four decades.”

I’ve thought a lot this week about the deliberations I witnessed.

The concerns Biden expressed then have been more than vindicated today. We did get bogged down in Afghanistan. Yes, there has been enormous progress there on some fronts — most notably for women and girls, who suffered under the Taliban’s repressive rule. Yes, our own military served with extraordinary courage and sacrificed greatly to give Afghans the chance for freedom denied by a brutal and repressive theocracy.

Yet this wasn’t the mission that drew us to Afghanistan. Bin Laden was captured and killed a decade ago. Al Qaeda has been degraded. And, after 20 years in which so much American blood has been spilled and treasure lost, it was time to pass the task of securing those gains on to the Afghans themselves.

As Biden said in his televised remarks Monday, the fact that the Afghan security forces in which we invested so much were abjectly ill-prepared and unwilling to take up their own defense was a pretty fair sign that they never would be.

Yet the argument for leaving doesn’t explain or justify the chaotic manner in which we did. There is shame in those images of Afghans who for years had helped support our efforts, chasing US military aircraft down runways in a desperate attempt to escape Taliban reprisals.

Maybe the explanation for the debacle lies in faulty intelligence, misjudging the warp speed at which the Taliban would advance and Kabul would fall. Perhaps there were other institutional errors. There will be plenty of reporting and after-action reviews on Capitol Hill and within the administration itself to get to the bottom of that.

But I wonder if Biden didn’t also carry some of the scars of his past battles over Afghanistan into his decision-making as Commander-in Chief. Was he so determined not to be cowed by the Pentagon, as perhaps he felt Obama was, that he ignored warnings he should have heeded? Was he so eager to deliver a final rebuke to Gates and others, who dismissed his concerns 12 years ago, that he moved too fast?

And did his resolve to finally end this Endless War blind this famously empathetic President to the humanitarian crisis that was unfolding on his watch?

No exit from Afghanistan was going to be easy or without a sense of pain and betrayal from Americans who served and sacrificed there and Afghans who have come to rely on the US and its allies and have been left to fend for themselves.

And any regeneration of Afghanistan as a staging area for al Qaeda, ISIS and acts of terrorism against Americans or our allies also will invite new debate about the President’s decision.

But as Biden argued, and events have proven, to remain after the Trump administration’s withdrawal agreement with the Taliban last year, and Trump’s subsequent drawdown of US troops, would have required reengaging and placing more Americans in harm’s way to shore up a corrupt and feckless government.

Biden made a strong case for his decision to leave Afghanistan after two decades. It is one with which polls suggest most Americans agree.

Yet in stubbornly insisting that he was right all along, without fully acknowledging the pain of this withdrawal and botched execution of the endgame, Biden diminished the power of his argument.