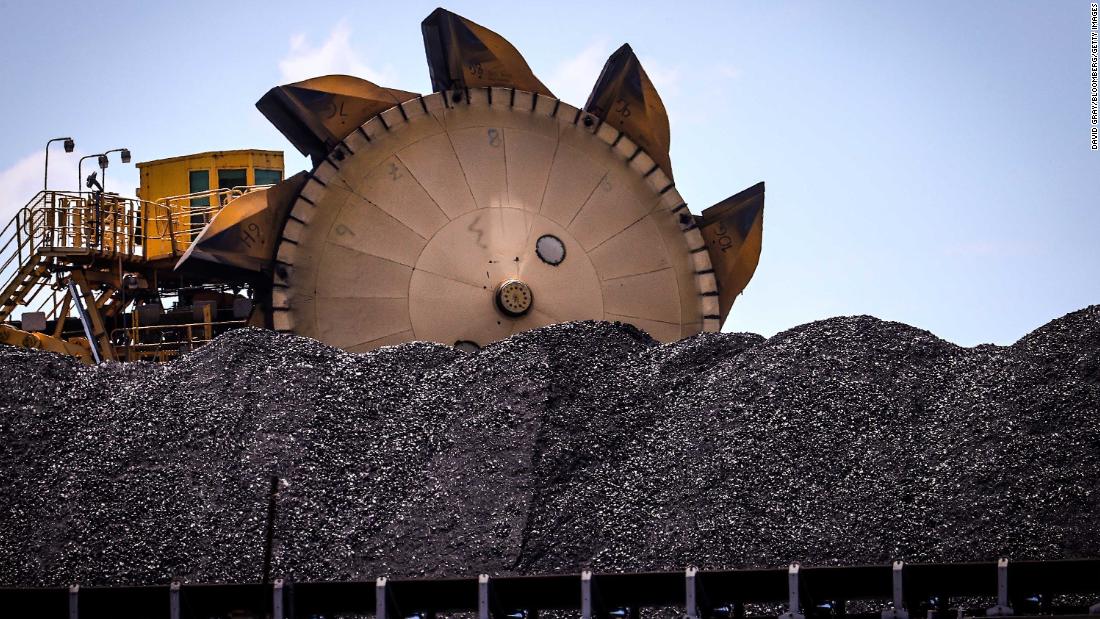 In his 360-word statement, the minister listed a number of economic benefits coal has brought the Australian economy but made no mention of the climate crisis.

Pitt’s statement added that figures showing coal’s “impending death are greatly exaggerated and its future is assured well beyond 2030.”

“Coal consumption throughout Asia is forecast by the International Energy Agency to grow over the next decade to meet the energy demands of countries like China, India and South Korea,” Pitt said.

“Australia has an important role to play in meeting that demand. Coal will continue to generate billions of dollars in royalties and taxes for state and federal governments, and directly employ over 50,000 Australians.”

Australia is the second-largest exporter of coal in the world and the country has a high per capita carbon footprint, largely because of its coal industry. An Australian emits an average of 17 metric tons of carbon dioxide, while the global average is less than 5 tons per person, European Commission data shows.

Of the world’s 176 new coal projects, 79 of them are in Australia, according to Fitch Solutions’ Global Mines Database.

Pitt made his comments as the UN’s top climate envoy, Selwin Hart, said the global phase-out of coal was not happening fast enough “to avert a global climate catastrophe.”

“We fully understand the role that coal and other fossil fuels have played in Australia’s economy, even if mining accounts for a small fraction — around 2% — of overall jobs,” Hart said during a video address to the Crawford Leadership Forum at the Australian National University on Monday.

“But it’s essential to have a broader, more honest and rational conversation about what is in Australia’s interests, because the bottom line is clear: If the world does not rapidly phase out coal, climate change will wreak havoc right across the Australian economy, from agriculture to tourism, and right across the services sector. Similarly, construction, housing and the property sector, in a country where the vast majority live on or near a coastline. It will be even more catastrophic in your neighborhood.”

Hart added that business and investors were increasingly abandoning coal in favor of renewable energy that is now cheaper in most places.

By not cutting coal, Australia is setting itself up for a future of climate disasters such as droughts, heatwaves, fires and floods, which will become more frequent and severe as the planet warms.

“It is increasingly clear that decarbonization is inevitable, and it is the greatest commercial opportunity of our age,” Hart said, adding that the world is “at a critical juncture in the climate crisis.”

Coal is the biggest single source of carbon emissions in the world, and the UN has called on OECD countries, including Australia, to phase out the fossil fuel by 2030.

China is the world’s biggest consumer and producer of coal, accounting for around 50% of the world’s production, and pressure is growing on the country to phase out the fossil fuel quicker than planned.

Scientists say key economies must cut carbon pollution by 45% this decade if the world is to contain average global temperature rises to 1.5˚C above pre-industrial levels. Going beyond that, scientists say, will mean more frequent and intense climate impacts, including droughts, heatwaves and wildfires, as well as heavy rainfall and floods.

Australia has pledged to reduce its greenhouse gas emissions by 26-28% by 2030, from 2005 levels, a pledge that sits well below renewed commitments by the United States, European Union and United Kingdom, among other developed nations.

US President Joe Biden increased his country’s pledge in April to reduce emissions by 50-52% in the same timeframe.

Australia, like dozens of other countries, missed a July 31 deadline, laid out in the 2015 Paris Agreement, to increase its pledge, though the government says it will do so ahead of the COP26 international climate talks to be held in Glasgow in November.

Australia has also not committed to net zero emissions by mid-century, a goal that the United States, European Union and United Kingdom, among other countries, have done. Net zero is where the amount of greenhouse gas emitted is no greater than the amount removed from the atmosphere.

Prime Minister Scott Morrison has said Australia is aiming to reach zero “as soon as possible,” and preferably by 2050, but has stopped shot of anything more concrete. Many Australian states have, however, committed to net zero independently of the central government.

Much of the developed world is switching to renewable sources to generate electricity, while Australia’s power grid remains heavily coal-reliant.

Coal is, however, still used extensively around the world for heavy industry, such as steel making, where energy from sources like wind and solar are not able to meet power requirements. Alternatives, like green hydrogen, are in development and are slowly coming into wider use.