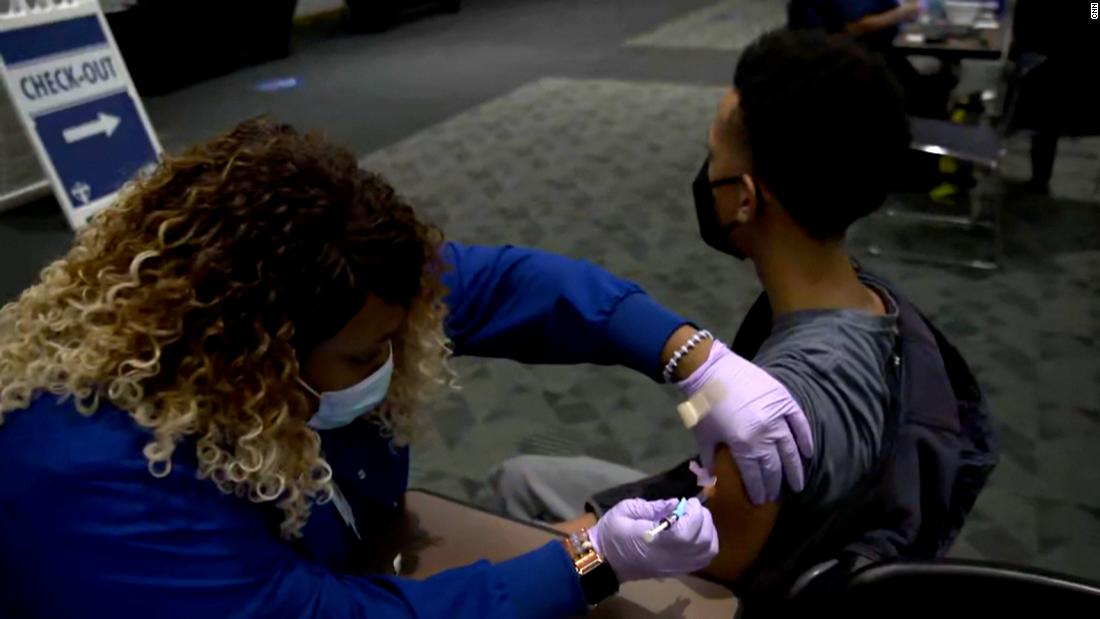 Our Lady of the Lake Regional Medical Center Director of Operations Thomas Dunn said seeing people of all ages come in for their first dose of the Covid-19 vaccination is a positive sign.

The hospital in Baton Rouge, Louisiana, is low on space as another wave of Covid-19 cases and hospitalizations sweeps the region. Masking and vaccinations, Gov. John Bel Edwards said, is the only way to end the nightmare.

As of Wednesday, 37.2% of Louisiana’s population was fully vaccinated, according to data from the US Centers for Disease Control and Prevention.

The Our Lady of the Lake Injection Clinic at Pennington in Baton Rouge has administered 50,000 shots since opening in February this year, Dunn said. In June, medical professionals at the site administered 1,500 shots. That number doubled to 3,000 in July.

This month, Dunn said, they’re seeing nearly three times as many first-time doses compared to June. Numbers are up across all age groups, with the greatest increase among those ages 26 to 40, and the average age of recipients in July was 35.

On Wednesday, sisters Bethany Wilson and Kate Wilson came to the clinic with their mother to get vaccinated before they go back to school.

“I was kind of excited,” 15-year-old Kate Wilson said. “It’s something I have to do for me and my community. It’s a responsibility, so it’s exciting.”

Both sisters came into the vaccination site with a heavy heart. They said their friend, a 19-year-old, has Covid-19. The sisters said he’s been hospitalized for more than 20 days — spending most of that time on a ventilator.

“It kind of just happened so fast that he got admitted to the hospital, then he was on a ventilator,” 17-year-old Bethany Wilson said, her voice breaking. “And now, he’s pulling through, he’s doing alright, he’s doing better. But it just scared me because he’s 19. He’s so young. And my brother’s 19.”

Mother of two, Erone Burchell, brought her 27-year-old daughter and 16-year-old son to get their first doses of the Pfizer vaccine. She’s a cancer survivor and works in the medical field.

Burchell’s son Larry said he wanted to get vaccinated before the start of the school year. He said while some kids his age believe they’re invincible, he knows Covid-19 is a major threat.

“Beyond a shadow of a doubt, it’s real, it’s happening, so do whatever you can to stay safe and get the vaccine,” the teenager said.

Kaylan Merritt said she was a vaccine holdout who was too fearful to get the shots.

“Just hearing that you can get the shot and then still get it, still spread it. I was kind of thinking, ‘Well, what’s the point?’ But then when the Delta variant came out, it kind of urged me to want to get it more. And my family, too,” she said.

“It really was not as bad as I thought. It was just like a little ant bite, small prick, and I’m feeling good,” said Merritt.

Health experts and officials are hoping even more people will sign up for the “little ant bite,” especially as the spread of the virus in Louisiana overwhelms hospitals in the area.

Our Lady of the Lake Hospital in Baton Rouge, Louisiana’s largest hospital, admitted 32 new Covid-19 patients in a 24-hour period ending Wednesday morning — a record number, according to hospital spokesperson Ryan Cross. As of 6 a.m. Wednesday, 175 people were hospitalized with the virus and 61 were in the ICU, he said.

Officials at Ochsner Hospital for Children in Jefferson announced Wednesday that they are seeing a “concerning and significant” increase in the percent positivity for Covid-19 in children 19 and under in recent weeks.

To help relieve the pressure on hospitals, Edwards reinstated a mask mandate that went into effect Wednesday and lasts until at least September 1.

“The least onerous thing we can do in order to try and curb transmission and give some breathing room back to our hospitals is to reinstate the mask mandate,” he said.

Edwards highlighted that while the state was reporting around two deaths a day a month ago, there have been 103 in just the past two days.

“The capacity at our hospitals is just absolutely strained,” Edwards said.