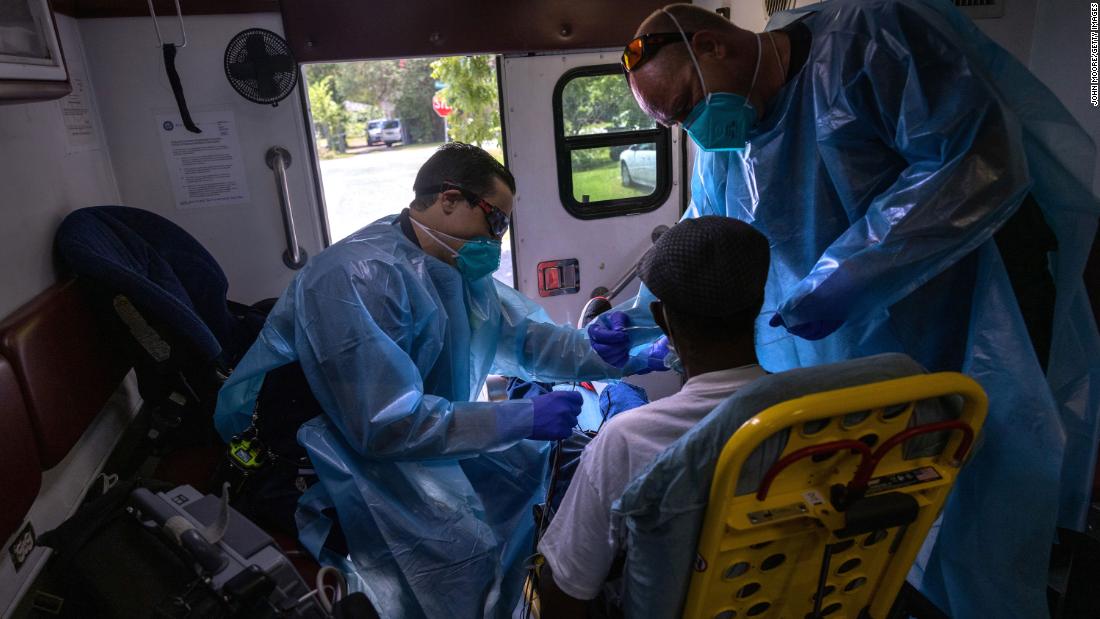 The approval could help allay concerns for those who are vaccine hesitant, as all three vaccines available in the US have so far been distributed under emergency use authorization.

It could also help businesses, schools and states enforce vaccine mandates, experts have said. Such mandates could help quell the ever-growing number of cases, especially in states that are experiencing a lack of available ICU beds.

The US military also will now require all service members to be vaccinated, Pentagon spokesperson John Kirby said Monday.

And in New Jersey, all state employees must be fully vaccinated by October 18 or be subject to regular testing, Gov. Phil Murphy said Monday.

The number of vaccine doses administered daily has mostly increased over the past week — with three days surpassing a million reported doses, according to data published by the US Centers for Disease Control and Prevention. Meanwhile, the daily average of new reported cases is around 147,000, and experts have warned it could surpass 200,000 on the current trajectory.
More than half of the total US population, 51.5% or about 170 million people, were fully vaccinated as of Sunday, CDC data showed, while 60.7% have received at least one dose. A total of 25 states have fully vaccinated more than half of their residents.

But in many states with lower vaccination rates, hospitals have been overwhelmed by a surge in Covid-19 patients.

In Mississippi, where 36.8% of the population is fully vaccinated, Gov. Tate Reeves said Sunday that a 23-person active-duty military Covid-19 response team was deployed in Jackson to provide supplemental medical staffing at hospitals. A second team is expected to arrive in Tupelo in the next week.

An uptick in cases among school aged children following the return to in-person learning has also worried health officials, with thousands of kids quarantined over the past week due to Covid-19 outbreaks. Experts have stressed that to protect those under 12 who can’t get vaccinated yet, it’s important to make sure those who are eligible get the shot. Another key prevention method is wearing a mask.

Former FDA Commissioner Scott Gottlieb told CBS’ “Face the Nation” on Sunday that warning signs for what could happen nationwide in the coming weeks have already been seen in the South.

“Schools open earlier in the South, against the backdrop of still a lot of prevalence (of Delta) and the infection is getting into schools, and it’s proving to be hard to control in schools,” Gottlieb explained. “Delta is a very contagious variant and so I think that this is a harbinger of the challenges that we’re going to face nationally as schools reopen.”

How to keep schools open and children safe

While districts continue to return to in-person learning, a debate is brewing between districts, parents and local officials on how to make the safest return to classrooms.

In Texas and Florida, governors have threatened to pull funding from districts that create mask mandates, but several local school boards are pushing back and telling students to mask up.

In Texas, where the issue is working its way through the courts, one district managed to get around official orders by making the mask mandate part of its school uniform policy.

In Florida, nearly 20,000 students and staff members had to be quarantined after more than 6,000 covid cases were identified among the state’s 15 largest school districts since the start of school, according to a CNN analysis conducted last week. Among those, were 4,641 students and 1,547 employees who tested positive. That doesn’t include the two biggest school districts in the state, Miami-Dade and Broward.

While the number of cases has been rising amid the return to school, Gottlieb said it’s hard to assess if that is because the Delta variant itself is more aggressive in children or because we are simply exposing more kids to the virus.

He said schools should be following the lead of some districts in North Dakota, where schools are testing close contacts every few days to make sure asymptomatic cases aren’t going undiagnosed.

“Test the close contact of kids immediately to make sure there’s not other asymptomatic cases that are going undiagnosed, and then test them at some kind of interval, maybe three days and five days to make sure that there’s not an outbreak being triggered in the school,” Gottlieb told CBS.

US Surgeon General Dr. Vivek Murthy echoed the importance of keeping children safe amid the rise in pediatric cases.

“It’s our moral responsibility as a society to do everything we can to protect our children,” he told ABC’s “This Week” on Sunday. “Number one, all of us getting vaccinated as adults is important. Kids too young to get vaccinated rely on those around them to shield them from the virus.”

Vaccine boosters up for consideration

While vaccination rates still lag in the US, those who are already vaccinated are weighing the need for booster shots.
Starting September 20, those who are eight months out from their second dose of either the Moderna or Pfizer vaccine will be eligible to receive a booster, if FDA authorizes them and the CDC recommends them.

And those who received the Johnson & Johnson vaccine will also likely need a booster, according to Murthy.

“We believe that J&J recipients will likely need a booster but we are waiting on some data from the company about a second dose,” Murthy said on CNN’s “State of the Union” Sunday.

So far, only Pfizer has submitted initial booster data to the FDA; the company said Phase 3 results evaluating the third dose are expected shortly.

At the same time it’s considering boosters, the FDA has been working with Pfizer and BioNTech, Moderna, and Johnson & Johnson towards full approval — a process known as Biologics License Application or BLA.