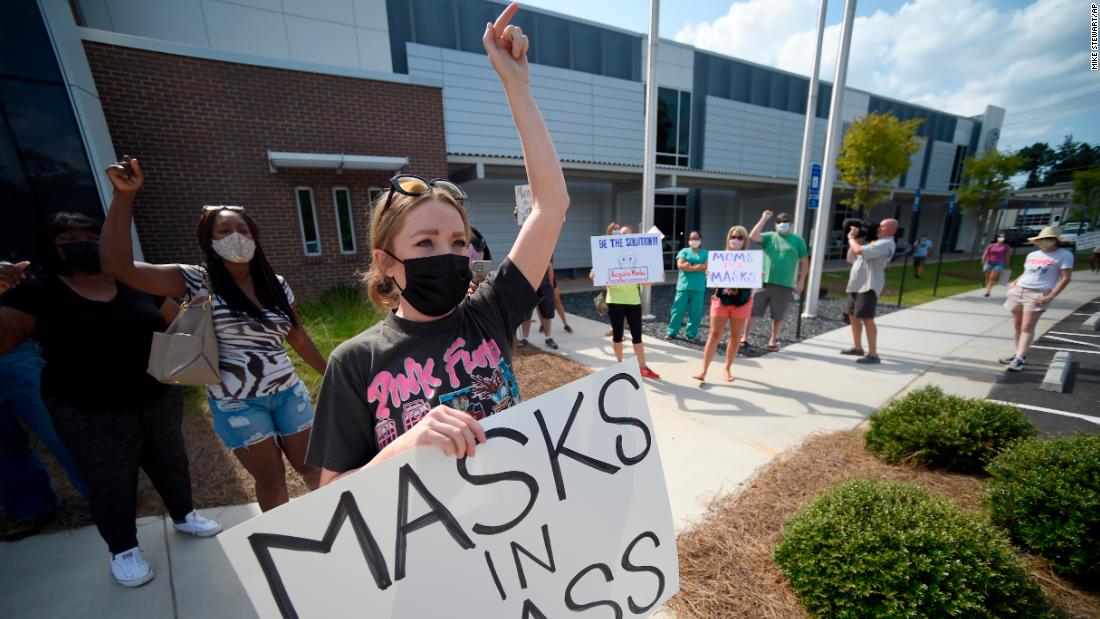 Some parents, including those with children suffering from asthma and one whose 13-year-old has a flagging immune system after fending off a rare leukemia as a younger child, are taking their kids out of school, they told CNN.

“Every day, there’s a chaotic event — entire grades sent home,” said Jessica Zeigler, who has taken her three kids, including two with health issues, out of county schools. “Every day seems like a series of terrible decisions that we have to make.”

Added Sara Cavorley, who took five of her kids, including the aforementioned 13-year-old, out of school this week: “I shouldn’t have to choose between my children’s life and school. That’s a no-brainer. I choose my kids.”

Parents describe a bait-and-switch situation. They were asked to choose between virtual and in-person learning in the spring, they say, when the school system was taking precautions — including requiring masks, social distancing, Plexiglas dividers and limits on cafeteria capacity — only to find school leaders significantly relaxed the protocols after parents opted for a return to the classroom. The lack of transparency in the decision-making is another frustration, parents say.

Parents in favor of masks plan a demonstration before the Cobb County Board of Education’s monthly meeting Thursday. The meeting’s agenda makes no mention of Covid-19 protocols.

Last week, a protest — held the day after East Side Elementary’s entire fifth-grade class was sent home because of a spike in Covid-19 cases — turned testy when pro-mask parents showed up to find counterprotesters defending the decision to “unmask” children.

“I feel like they’re catering to a minority because they’re louder and they’re meaner and they’re not rational,” said Amber OBot, who is considering making her 5-year-old wait till next year to start kindergarten unless the county changes its policy.

The row unfolding in one of Georgia’s largest and wealthiest counties, which oversees the education of more than 112,000 students, is among many parents are witnessing across the nation.
As they send kids back to school amid an atmosphere in which science and politics collide, the Delta variant is driving a surge in cases and children younger than 12 are not yet eligible to receive vaccines. It’s forcing many school districts to rethink their plans.
As of last week, the district reported 551 active cases in its schools. East Cobb Pediatrics & Adolescent Medicine warned parents Tuesday it had reached a tipping point, with a “dramatic rise in pediatric infections.” The practice is canceling well visits in upcoming weeks to focus on sick children, its letter to parents says.
Cobb County has reported more than 88,000 cases and 1,144 deaths since the pandemic began, according to Johns Hopkins University. In Cobb’s region, almost every hospital bed and intensive care unit is filled.

Board member: ‘Nothing has been debunked’

Six of the school board’s seven members did not respond to CNN’s request for comment, nor did Superintendent Chris Ragsdale or his assistant. The only response came from the email account of Vice Chairman David Banks. The email began, “Are masks useless?” and the writer introduced himself as “Emery L. of Smyrna Georgia,” a retired naval officer and former hospital administrator.

Asked whether Banks or Emery L. wrote the email, which came from Banks’ official school board account, and for more information on Emery L.’s credentials (the email redacts the name of a “research project” Emery L. purports to have “operated” for 15 years), there was no response. The board members and superintendent declined to say if emails sent from Banks’ account to the press and parents constitute official communications.

“Those pushing the use of masks DO NOT KNOW what they are talking about,” the email says, flatly — and falsely — claiming masks offer zero protection against viruses.

The email ends with a paragraph of vague sourcing, including a “Summary from official publications of Mask Facts by Emery Leonard-July 23,2020,” along with a “study” in an online magazine that is not a study but a series of tweets posted by a Texas entrepreneur last year.

One mother took Banks to task in an email, saying he was relying on debunked information, and it was “deeply disturbing, terrifying and embarrassing” he was making decisions concerning her children. In bullet points, she explained how each of his sources was so obscure that the citations did not allow parents to vet his sources, according to the correspondence from the mother, who shared the emails with CNN on the condition of anonymity.

“Nothing has been debunked. This is in your head! Be safe,” Banks replied with no elaboration.

Other parents also shared emails they received from Banks citing Emery L. as a source. In them, Banks, a retired information technology consultant, includes long-debunked videos from doctors with questionable credentials and makes a series of egregiously false claims.

To skim the highlights: Masks don’t work for any virus; there’s “NO valid test” for Covid-19; “Covid shots do not protect very well from Covid19”; Dr. Anthony Fauci paid a Chinese government lab to research Covid-19 and lied to the US Senate about it; Covid-19 vaccines killed 12,366 people in their first seven months of use; and the vaccines contain toxic chemicals that can “penetrate the brain with injury, and infect the entire human body.”

Parents say they’re frustrated but not surprised. Banks has come under fire before for controversial remarks, including referring to Covid-19 as the “China virus” and telling a local newspaper he opposed a board resolution on systemic racism, in part, because there are “black-on-black” problems in south Cobb, and it’s “a cultural thing. When 70 percent don’t have fathers in the house, that’s a problem.”

‘This is not quarantining’

Dr. Timothy Lin is one of 239 local doctors who signed a letter to Ragsdale and the school board expressing dismay that the district has “chosen to disregard best practices for mitigation.”

“Our students, staff and community deserve to be protected while they learn, yet your decisions have placed the majority of them at risk,” the letter says, pointing out that experts suggest closing schools when a community sees 100 cases per 100,000 people.

A pulmonary critical care specialist, Lin knows reports of rising case numbers are no hoax, so falsehoods like those spread by Banks are frustrating, he said.

Mountain View Elementary, where his 8- and 9-year-old go to school, hasn’t had many reported cases, he said, but his kids are wearing their masks nonetheless. Still, some matters are out of his hands, such as Cobb County schools’ quarantine policy, which allows children who’ve had close Covid-19 contacts to continue attending school if they’re asymptomatic and wear a mask.

“If you don’t think masks work, why do you think masks are going to work if you’re exposed?” he asked, referring to Banks’ email to parents. “If you look up the definition of quarantine — this is not quarantining.”

He doesn’t understand why so many parents and school leaders want to make masks a political matter when there are lives — including children’s lives — at stake, he said.

Cobb County is an outlier in the Atlanta area. Clayton, DeKalb, Fulton and Gwinnett counties are requiring masks in schools, as is the city of Atlanta. Cobb County Manager Jackie McMorris announced Tuesday that masks will be required in all county facilities, an order that doesn’t include schools.
The county Department of Public Health has issued guidance, recommending the school district follow the US Centers for Disease Control and Prevention’s guidelines, but also saying, “Each school system has their own unique challenges to meet the needs of students and faculty and we respect their authority to make the final decisions.”
District Director Janet Memark was not available for an interview, spokeswoman Valerie Crow said in an email reiterating the department’s double-sided guidance. Asked if Memark worried the district’s refusal to heed CDC guidance could create a larger public health problem for the county, Crow did not reply.

Nooshin Johnson, a mother of two sons, 6 and 11, attending Cobb County schools, said the district policy is affecting her own health.

The first week of school, her youngest, who has asthma, came home upset because a teacher made him sit next to an unmasked child and wouldn’t let him change seats. This, despite Cobb schools saying social distancing would be implemented when feasible.

“He was crying, scared to go back to school,” she said. “I can only imagine what Covid would do if he caught it.”

She picked the boys up at lunchtime that first week so they wouldn’t have to dine in a crowded lunchroom, but as cases spiked and her children came home with headaches and stomachaches, she took them out of school last week.

She understands the push for in-person learning — and concedes she can’t provide what her sons receive in a classroom — but she’s debating if she’ll send them back, even after their Covid-19 tests came back negative. She feels guilty taking them somewhere she doesn’t believe they’re safe, she said.

Today, her blood pressure is soaring and her heartbeat is irregular — problems she’s never had before — and she’s seeing a cardiologist for the first time. She underwent two days of heart tests last week, she said, and her primary care physician told her he’s seeing many parents succumb to stress this back-to-school season.

“It feels like we’re living in a dictatorship with this Cobb County school board,” Johnson said. “I feel like, is this a game with kids’ lives?”