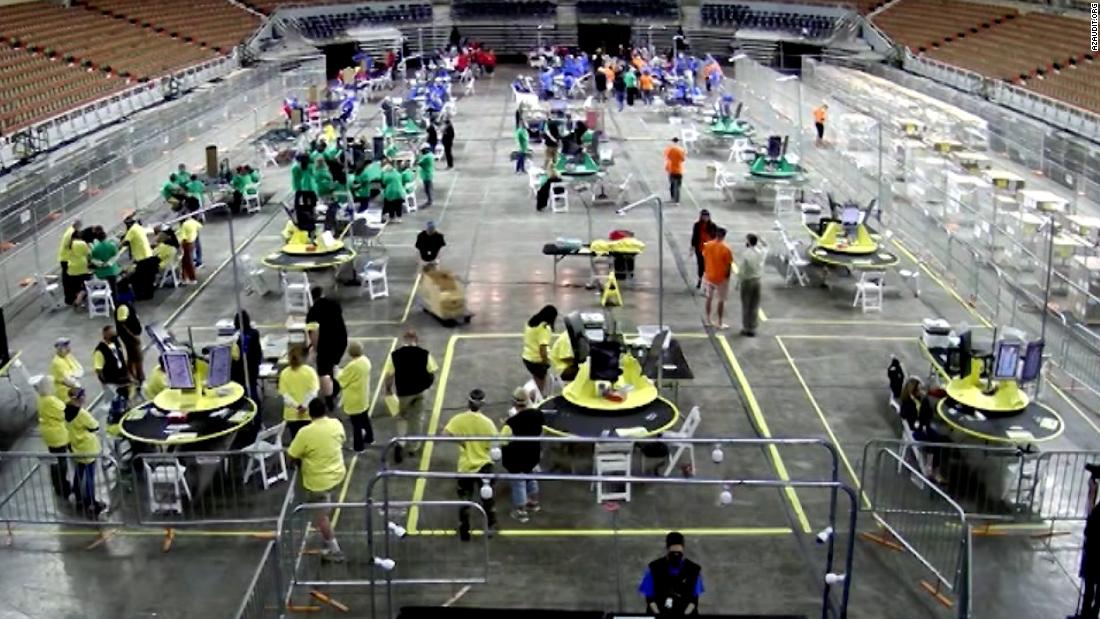 Cyber Ninjas Chief Executive Officer Doug Logan, whose firm was hired by the Republican-led Arizona Senate to audit the 2.1 million votes cast in Maricopa County in 2020’s presidential race, and two other members of the five-person audit team tested positive “and are quite sick,” Senate President Karen Fann said in a statement.

Logan and other members of his team were often seen during the recount process without masks. It is not clear whether those who tested positive had been vaccinated. CNN reached out to Cyber Ninjas requesting comment.

Elections experts in both parties have said for months that results of the “audit” — pushed for by Republican lawmakers and conducted by the Florida-based company, which had no experience auditing election results and whose chief executive, Logan, has repeated wild conspiracy theories about election fraud — will not be credible.

Fann said senators are receiving “a portion of the draft report” Monday but did not detail which portion and what will be left out. Fann also said senators want the envelopes that contained ballots mailed in last year included in the final report — but got the images of those envelopes from Maricopa County too late.

“In addition to the illnesses, it wasn’t until Thursday that the Senate received the images of the ballot envelopes from Maricopa County and are hoping to have those analyzed as soon as possible to incorporate those results into the final report,” Fann said in a statement. “The Senate legal team will meet Wednesday to start reviewing the draft report, and when the remainder of the draft is submitted, the Senate team will hold another meeting to continue checking for accuracy, clarity, and proof of documentation of findings. Once that is complete, the final report will be presented to the Senate Judiciary Committee and findings released to the public.”

Last week, Maricopa County officials said they’d already sent the images to the Cyber Ninjas review team in the past and were simply resending them. Randy Pullen, a spokesman for the Senate-sponsored audit, told CNN that the ballot images would not be handled by Cyber Ninjas.

The report was due to the Senate — but it could be weeks or months before its results are revealed to the public. Fann and a team selected by Senate Republicans planned to review the report.

Ken Bennett, the Senate’s liaison with the audit team, said last week that a group will spend the following “days or weeks” verifying the report and “checking for accuracy.”

Bennett said he wanted to “spread fact, not rumor,” that this would only be a draft report and it would not be made public. The Senate team could ask Cyber Ninjas for further clarifications of its findings.

“Senate team will then review for accuracy and clarity for final report which will be released publicly,” Fann, a Republican, tweeted last week.

Once the audit team delivers the full draft report, Bennett expects the review process to take “several weeks” before the report is made public.

The company and its volunteers and subcontractors did not follow standard auditing procedures. Observers from Democratic Secretary of State Katie Hobbs’ office have repeatedly noted instances in which those conducting the audit have broken their own rules.
And the partisan nature of the audit and its funders — $5.7 million came from outside, conservative sources, compared with just $150,000 from the state Senate, which ordered the audit — has long cast serious doubt on its credibility.
No matter the results of the audit, the reality that Joe Biden is president and won Arizona’s 11 electoral votes last year will not change. But that hasn’t stopped former President Donald Trump and his allies — particularly far-right, pro-Trump propaganda outlets — from claiming otherwise and saying that other states should follow Arizona’s lead in conducting audits. Trump issued a raft of false statements ahead of a campaign-style rally in the state last month, and used the rally to repeat those lies.

“Does everybody here understand that the 2020 election was a total disgrace?” Trump said.

Trump’s allies have tried to export Arizona’s audit to other states — including Pennsylvania, where a state senator has sought to conduct his own review of individual counties’ results but has been rebuffed by those counties, and Wisconsin, where Republican lawmakers are looking into several approaches but have butted heads over which avenues to pursue.

The finalization of the audit — and the potential for the report detailing its results to soon become public — has led Republican and Democratic elections officials in Arizona, including GOP officials in Maricopa County, to warn that it should not be taken seriously.

Hobbs, the Arizona secretary of state and a 2022 Democratic candidate for governor, issued a 46-page report pre-butting the audit’s results, too.

“It is clear that any ‘outcomes’ or ‘conclusions’ that are reported from the Senate’s review, by the Cyber Ninjas or any of their subcontractors or partners, are unreliable,” Hobbs’ report says.

The report calls the Senate-run recount “secretive and disorganized.” It reiterates most of the issues Hobbs has cited for months: lack of security, shifting processes for screening and counting ballots, chain of custody and transparency problems.

Over and over the report notes there were no consistent procedures in reading, tallying and storing the ballots. One person working to examine the paper in the ballots complained that the process changed “every day, every day!”

In one example, a Senate contractor told observers that after one week, scanning of the paper ballots “had been abandoned because contractors performed a software update which resulted in the loss of all the ballot images.”

Stephen Richer, the Maricopa County recorder — a Republican whose 2020 victory was one of the GOP’s few gains in the state, as they lost the presidential race and a Senate seat — released a 38-page letter titled “Dear Arizona Republicans” last week.

In the letter, Richer, who has become an outspoken critic of the Cyber Ninjas audit, details his own political history as a loyal Republican who voted for Trump and explains the missteps the auditors and Senate Republicans who hired them have taken that led him to respond forcefully — including disproven allegations of criminal wrongdoing posted on a Twitter account run by the audit team.

Richer notes that three post-election partial audits of Maricopa County’s results found them to be accurate.

He also said he would still be willing to conduct a review of the 2020 election to ease Republicans’ worries, and would do so with Fann and GOP lawmakers — if they ditched Cyber Ninjas.

“What I’m not willing to do is further indulge the biased, inexperienced, incompetent, conspiracy-theory-driven, unscrupulous, partisan Cyber Ninjas,” Richer said.

He wrote that the audit “is an abomination that has so far eroded election confidence and defamed good people.”