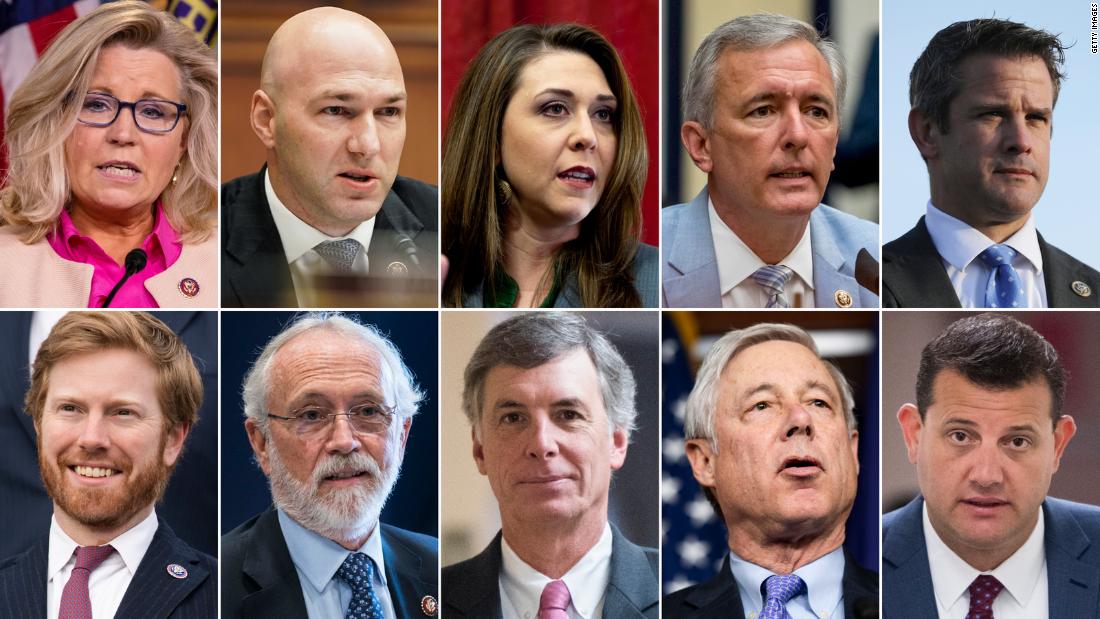 “1 down, 9 to go,” Trump said in a statement after Gonzalez’s announcement.

The other nine House Republicans have also faced backlash, including from Trump, members of their party and primary challenge threats. But they’re also well positioned in that their campaigns have raised in most races more money than their primary challengers.

After Gonzalez’s announcement, Rep. Liz Cheney, who had also voted to impeach Trump, tweeted, “On Constitution Day, Donald Trump’s statement about Rep. Anthony Gonzalez reminds us all, once again, that Trump is at war with the Constitution.”

In a statement announcing his decision, Gonzalez cited “toxic dynamics” within the Republican Party.

“While my desire to build a fuller family life is at the heart of my decision, it is also true that the current state of our politics, especially many of the toxic dynamics inside our own party, is a significant factor in my decision,” he said.

Cheney has faced sharp criticism from Wyoming to Washington since voting to impeach Trump for “incitement of insurrection” after a pro-Trump mob attacked the Capitol on January 6 in attempt to stop Congress from certifying the results of the 2020 election. Afterward, Cheney said Trump “summoned,” “assembled” and “lit the flame of this attack” and that “there has never been a greater betrayal by a President of the United States of his office and his oath to the Constitution.”

The Wyoming Republican Party then censured her, and, after she repeatedly called out Trump’s “Big Lie” that the 2020 election was stolen, House Republicans ousted her from her leadership post as conference chair.

Those moves sent a high-profile message about the Republican Party’s priorities, its ongoing loyalty to the former President and the limited extent to which it is willing to tolerate dissent. After a months-long search for a challenger to Cheney, Trump endorsed former Wyoming national Republican committeewoman Harriet Hageman last week.

In an interview with CNN, Hageman, a former Cheney supporter, repeatedly declined to acknowledge that Joe Biden won the presidential election, saying, “I think that there are legitimate questions about what happened during the 2020 election.” Hageman also said she would “absolutely not” have voted to impeach Trump, and that those who “trespassed or destroyed property should be held responsible for their own actions,” rather than the former President, who she believed was not granted proper “due process.”

Kinzinger has been in the national spotlight often since his impeachment vote and has become a leading critic of the Republican Party’s embrace of Trump’s “Big Lie” and other conspiracy theories.

The Illinois Republican launched a political action committee as part of an effort he’s calling “Country First” that seeks to counter the GOP’s embrace of conspiracy theories and the former President.

The effort has already run into challenges. He recently endorsed a Texas GOP congressional candidate, Michael Wood, who ran unsuccessfully in a crowded field on a platform calling for Republicans to turn away from Trump and reject conspiracy theories.

“I think what’s important is that people see there are people out there that support you, that will back you if you do the right thing,” Kinzinger told CNN of the endorsement. “It’s a long-term battle for the soul of the party.”

Kinzinger has been censured by several county GOP organizations in Illinois and drawn a pro-Trump primary challenger, Catalina Lauf, who has said she is running against him, arguing that he “betrayed his constituents” and criticizing his impeachment vote.

John Katko has faced criticism from Trump and local GOP leaders in his home state of New York as a result of his impeachment vote. But he has displayed a unique ability to win his district even though Democratic presidential nominees have carried it.

In the run-up to the vote to oust Cheney from her position as the No. 3 House Republican, Katko said he would support GOP Rep. Elise Stefanik, another New York lawmaker. “I have every confidence that Elise will be a superb leader for all of our conference, not just some,” Katko told The Auburn Citizen, though he also called Cheney “a good friend.”

The congressman has stood by his impeachment vote, telling CNN in February, “Hell no,” when asked if he had any regrets over the vote to impeach Trump.

In August, John Murtari, a software engineer and an Air Force veteran, became the first Republican to challenge Katko.

In September, Trump endorsed Michigan state Rep. Steve Carra in a challenge to Upton, who the former President labeled a “RINO,” or “Republican in name only.”

Trump specifically noted that Upton had voted for impeachment in making his endorsement, and said, “He doesn’t deserve to keep his seat.”

Upton has also faced rebukes from Republicans at the state-level following his impeachment vote.

When he announced he would vote to impeach, Upton said in a statement, “The Congress must hold President Trump to account and send a clear message that our country cannot and will not tolerate any effort by any President to impede the peaceful transfer of power from one President to the next.”

In Herrera Beutler’s home state of Washington, the state’s Republican Central Committee passed a resolution condemning Trump’s impeachment “without question or exception” and expressing disappointment at the congresswoman and Rep. Dan Newhouse, another Washington Republican who voted to impeach.

The congresswoman defended her vote to CNN in February, saying, “When push comes to shove, I’m gonna stand with the Constitution, which is why I actually I’m at peace with it.”

Herrera Beutler also said that she’s “not worried” about a potential primary challenger.

“There’s a lot of Republicans who disagreed with me on it, and I totally respect that,” Herrera Beutler said at the time. “They don’t expect you to agree with them on everything, but they want to be able to trust you.”

One challenger, Joe Kent, a retired US Army Special Forces officer and Gold Star husband, told CNN in July: “I think Trump won, but I want to prove it.” He has described himself as an “American First Republican” and has taken on the congresswoman specifically over her impeachment vote, saying that she “no longer represents our community’s values.” He is speaking at a right-wing rally on September 18 supporting those who attacked the Capitol on January 6.

“All Americans are entitled to due process, the J6 political prisoners have been deprived of this for 9 months,” Kent told CNN. “All Americans should be outraged that this is happening and that so few of our political leaders have spoken up against this.”

Despite pushback he has faced, Newhouse told CNN in February he does not have regrets about his vote.

“Can I say that’s a dumb question?” the congressman said when asked if he has any after receiving backlash from Trump supporters. “I do not regret it.”

At the end of January, Newhouse rebuffed a call for his resignation from a number of county GOP leaders.

“I am not resigning,” Newhouse said, according to the Spokesman-Review. “Many Republicans have agreed with my vote, and many have disagreed. For those who disagree with me on this issue, I hope they will remember my lifelong support for conservative causes and values.”

Newhouse also faces the threat of a primary challenge. One Republican opponent looking to unseat him, Loren Culp, has stressed his support of Trump and says on his campaign website the district “should be represented by a constitutional conservative who will always put America First.” But Culp has only raised roughly $23,000, according to the latest available FEC data, far less than what Newhouse has raised.

Meijer has been censured by GOP county groups, and Tom Norton, the third-place finisher in a 2020 primary won by Meijer in western Michigan, has said he is running again, citing the congressman’s impeachment vote.

Meijer has spoken out about his concerns over the future of the Republican Party in the wake of January 6.

In an interview with CNN earlier this year, Meijer expressed concern that baseless conspiracy theories like QAnon will destroy the GOP from within if Republicans don’t decisively and unequivocally condemn the false and dangerous beliefs and take action to stop their spread.

“When we say QAnon, you have the sort of extreme forms, but you also just have this softer, gradual undermining of any shared, collective sense of truth,” Meijer said.

The Michigan freshman believes conspiracy theories fuel “incredibly unrealistic and unachievable expectations” and “a cycle of disillusionment and alienation” that could lead conservative voters to sit out elections or, in a worst-case scenario, turn to political violence, like what happened on January 6.

Rice has also faced headwinds in his home state over his impeachment stance, and a number of Republicans launched campaigns to take his seat representing a red district in the northeast part of the state.

The South Carolina Republican Party voted in January to formally censure Rice, who had not been expected to vote for impeachment but who explained after his vote that the President’s response to the riot led him to vote alongside the chamber’s Democrats.

Rice told CNN in February he stood by his vote. “In eight years in Congress, I probably had a hundred votes that I could have gone either way, and I maybe second-guessed a little bit,” he said. “This is not one of them.”

Valadao of California has also had to grapple with the threat of a primary challenge in a swing district.

The “issues” page on a website launched by candidate Chris Mathys, a former Fresno city councilman, includes just three sentences targeting the congressman’s impeachment vote. But Mathys, who said he believes that Trump won the 2020 election, raised just $12,300 in the second quarter of 2021, and gave his campaign a $100,000 loan. Valadao raised over $482,000 during those three months, and had on hand nearly $820,000 — quadruple Mathys’ figure.