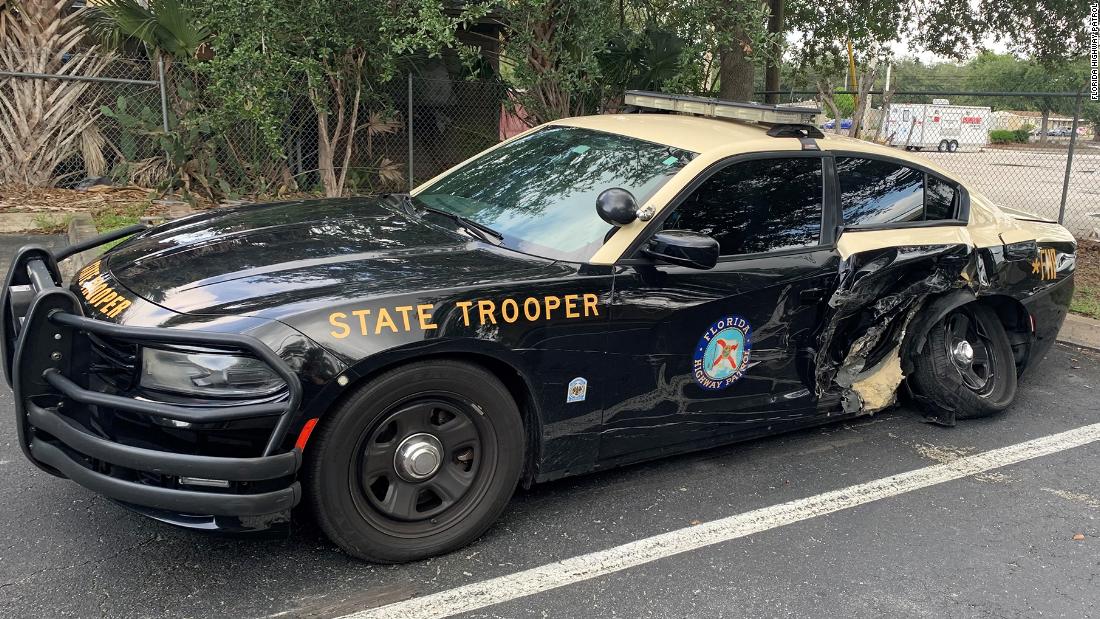 The Florida Highway Patrol reported the accident just before 5 in the morning Saturday along Interstate 4 in Orlando. No one was seriously injured in the crash, though the Tesla did narrowly miss hitting a state trooper as he left his car to assist another driver who had broken down on the highway.

The broken-down car was a Mercedes that had come to a stop in a travel lane. The police cruiser was stopped behind it with its emergency lights flashing. The left front of the Tesla Model 3 crashed into the side of the police car, and then hit the Mercedes.

“The driver stated that [the Tesla] was in Autopilot mode,” said the report from the Florida Highway Patrol.

The National Highway Traffic Safety Administration disclosed earlier this month that it is investigating at least 11 accidents involving Teslas that have hit police cars, ambulances or other emergency vehicles while they were responding to traffic accidents. The crashes under investigation occurred between January 22, 2018, and July 10, 2021, across nine states. They took place mostly at night, and the accident response scenes were all outfitted with control measures such as emergency vehicle lights, flares, illuminated arrow boards and road cones, according to NHTSA.

Florida police said they would report the crash to the NHTSA and to Tesla.

The highway safety agency said that it is important that Tesla owners using Autopilot remain alert and ready to take control of the car in order to avoid obstacles.

“NHTSA reminds the public that no commercially available motor vehicles today are capable of driving themselves,” the agency said in a statement. “Every available vehicle requires a human driver to be in control at all times, and all state laws hold human drivers responsible for operation of their vehicles.”

Tesla did not respond to a request for comment on the latest crash or on the NHTSA investigation. Although the company says that its data show cars using Autopilot have fewer accidents per mile than cars being driven by humans, it does warn that “current Autopilot features require active driver supervision and do not make the vehicle autonomous.”

In addition to the NHTSA probe, Senators Richard Blumenthal of Connecticut and Edward Markey of Massachusetts, Democrats who have been critical of Tesla in the past, have asked the Federal Trade Commission to launch an investigation into whether Tesla’s use of the term “Autopilot” and its claims about the car’s self-driving capabilities amount to misleading advertising. The FTC has not commented on whether it has launched the requested probe into Tesla’s claims.

Driver-assist options such as Tesla’s Autopilot or adaptive cruise control, which is available in a wide range of vehicles from various automakers, do a good job of slowing a car down when traffic ahead slows, said Sam Abuelsamid, an expert in self-driving vehicles and principal analyst at Guidehouse Insights.

But Abuelsamid said those vehicles are designed to ignore stationary objects when traveling at more than 40 mph so they don’t slam on the brakes when approaching overpasses or other objects on the side of the road — such as a car stopped on the shoulder. Fortunately most of these automatic braking systems do stop for stationary objects when they are traveling at slower speeds.

The bigger problem, according to Abuelsamid, is that many more Tesla owners appear to assume their cars can, in fact, drive themselves than do drivers of other vehicles with automatic driver-assist features. Moreover, the cues that a driver would see when approaching an accident site, such as road flares or flashing lights, make more sense to a human than they might to an auto drive system.

“When it works, which can be most of the time, it can be very good,” Abuelsamid said about Tesla’s Autopilot feature. “But it can easily be confused by things that humans would have no problem with. Machine visions are not as adaptive as humans’. And the problem is that all machine systems sometimes make silly errors.”