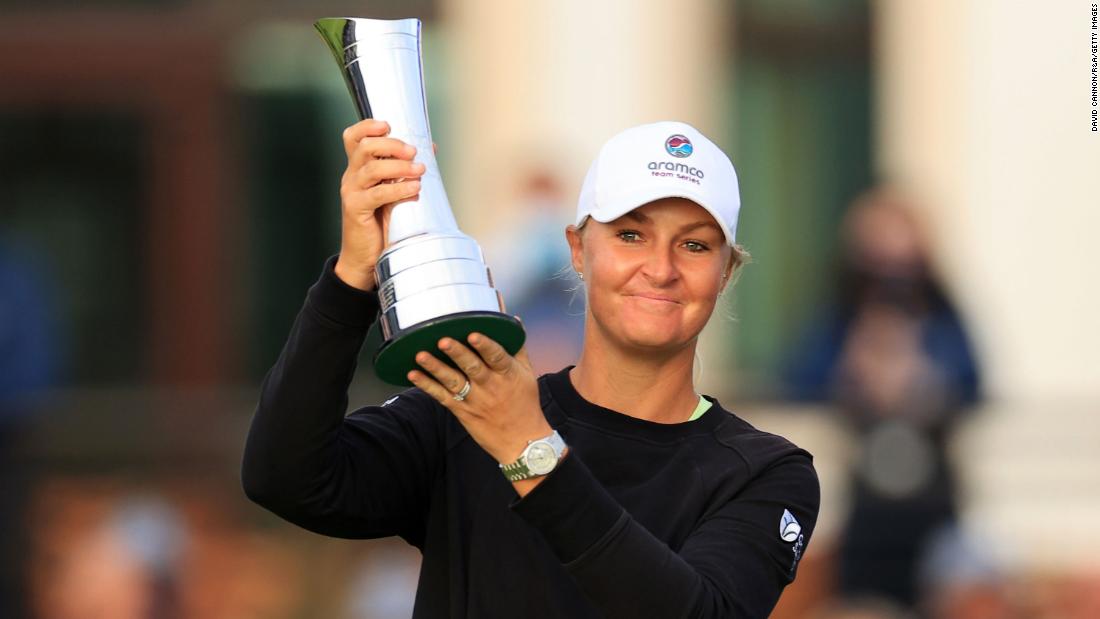 The Swedish golfer was all smiles as she was crowned champion after a nerve-wracking end to competition.

Nordqvist was tied on 12 under with playing partner Nanna Koerstz Madsen coming into the 18th hole but kept her nerve to finish with a par, as she watched the Dane suffer a double bogey.

Nordqvist had not won a major for nearly four years, winning her first back at the 2009 LPGA Championship before adding her second at the 2017 Evian Championship.

“I’ve been waiting for this one for a while, I haven’t won in a couple of years,” Nordqvist said after the win.

“There have been a lot of downs, a lot of hard times so I think it makes this a little sweeter.”

‘I could only dream about winning’

Nordqvist had soared to the top of the leaderboard going into the final day after a faultless seven-under-par 65. Her incredible round featured seven birdies as she finished Saturday tied on nine under with Koerstz Madsen.

The pair then found themselves locked in battle throughout the last day, with the result being decided on the final hole.

Whilst Nordqvist kept her calm, Koerstz Madsen suffered a nightmare with two mistakes on her approach to the green.

It gave Nordqvist two putts to win the title and the 34-year-old made no mistake in winning her third major trophy on the second attempt.

The beaming champion, who now wins $870,000, was embraced by her husband and she let out a sigh of relief.

“I could only dream about winning the British Open,” she added.

“I was supposed to get married 20 minutes away from here so this place is just truly special. I’ve never seen Carnoustie in this great a shape.”

Georgia Hall, Madelene Sagstrom and Lizette Salas shared the clubhouse lead going into the final hole but finished joint second, a shot behind the winner. A disappointed Koerstz Madsen finished tied in third with Minjee Lee.