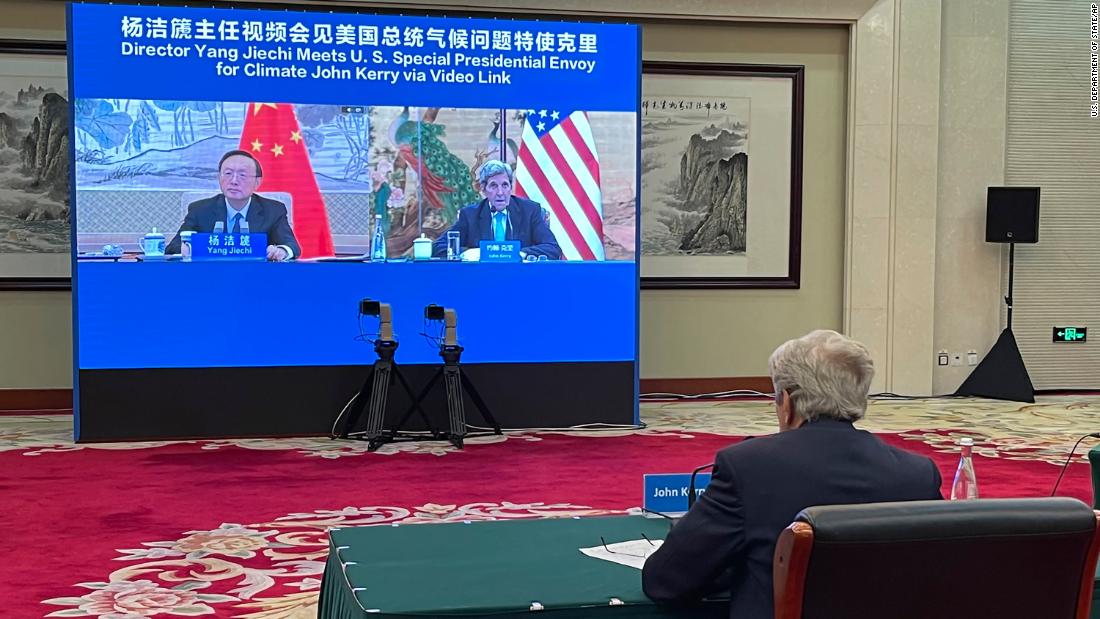 In July, the Chinese city of Zhengzhou was devastated by flooding that killed subway passengers and motorists unable to escape from underground tunnels. And just last week, flooding stretched across the United States’ East Coast, drowning a family of three in their submerged apartment and sweeping two young adults into a storm drain.

And yet, despite facing the same common threat, China and the United States — the world’s biggest greenhouse gas emitters — remain at odds when it comes to climate action.

American climate officials had attempted to separate talks from the broader bilateral relationship, hoping to avoid the type of antagonism that has typified recent attempts at US-China dialogue.

Kerry’s senior adviser, Jonathan Pershing, told US lawmakers in July that climate talks had so far avoided sensitive topics, such as reports that solar panels in China were built with forced labor by the Uyghur ethnic minority, which China has repeatedly denied.

Climate and human rights abuses are “things we distinguish, and we can separate out,” Pershing said at the time.

But the message this time from Wang, the foreign minister, was: No, you can’t.

“China-US climate change cooperation cannot be separated from the overall environment of China-US relations,” Wang told Kerry, according to a statement by the Chinese Foreign Ministry on September 1.

The US hopes climate cooperation can be an “oasis” in their bilateral relations, he added — “but if the ‘oasis’ is surrounded by ‘deserts,’ the ‘oasis’ will be degraded sooner or later.”

Many in Beijing accuse the US of failing to make significant progress on climate change, pointing to promised climate legislation during the Obama administration that never materialized, and the Trump administration’s withdrawal from the Paris Climate Accords.

“I think the grievance here, from China, is that the US is not doing enough domestically, and wants to point its finger toward Beijing,” said Li Shuo, a policy adviser for Greenpeace China, adding that any “clear-eyed person” could see “there is a big gap between what the US is preaching and what it is doing.”

This type of resentment is seemingly widespread among the Chinese public, with online users and news outlets largely ignoring Tianjin talks and giving US efforts the cold shoulder. The few comments made online were negative.

“If (the US) wants to reach an agreement with China on climate change, the two sides should be on an equal footing, and you should be honest with each other,” said one post on the heavily censored social media platform Weibo. “There is no need for you to unilaterally impose what China ‘must’ do.”

Another Weibo user commented, “Please put out the fires in California first. America always talks big but can’t even take care of its wildfire. What is there to discuss for climate change?”

State media has repeatedly criticized the US approach, comparing it — often inaccurately — with China’s own domestic polices, noting that President Joe Biden’s own climate agenda remains uncertain and dependent on approval from Congress.

“You keep on hearing this rhetoric from (the Foreign Ministry) saying China will deliver 100% what we promised,” Li said. “It is the other side of the coin they are trying to tell you, that the US is not delivering what they promised … (that) the other side does not carry a lot of credibility.”

Kerry had hoped to use his trip to help convince China to abandon coal as a power source. China is the world’s largest producer and consumer of coal, far outstripping the US, India and Australia.

The apparent hostility in China to the US’ climate agenda is a stark contrast to friendlier exchanges during the Obama administration, said Li — highlighting how diplomacy, public opinion and climate cooperation are closely tied.

China’s rhetoric about alleged American duplicity, and about climate being inseparable from broader bilateral relations, is not new. Wang, the foreign minister, said similar things earlier this year, including before Kerry’s last visit to Shanghai in April.

But there are two worrying things different about this visit. First, Kerry did not meet with Wang last time — marking the introduction of foreign policy discussion into climate talks, which experts have urged both sides to depoliticize. Second, unlike the Shanghai talks, this time there was no joint statement or announcement of concrete measures.

Though the door for cooperation is still open, the lack of an outcome “is definitely not good news for the planet,” Li said. The best-case scenario had been for the two countries to sign an agreement that could help pave the way for a pivotal United Nations climate conference in the Scottish city of Glasgow in November. Now, the conference faces a “much more difficult” process.

And their stalled cooperation has global consequences. If the US takes decisive climate action but China doesn’t reciprocate, or vice versa, it won’t be enough to stem the most severe effects of climate change — which we have already seen unfold in both countries, as well as elsewhere around the globe.

“When we look at climate change, it is not just a geopolitical issue, it’s an environmental and scientific matter,” Li said, adding that the two countries need to find a way to set aside politics and “row in the same direction.”

“There’s only so much we can pump into the atmosphere, and if we don’t act fast enough, there probably won’t be any ‘oasis’ in the world, or in US-China relations. It’ll all turn to desert sooner or later.”