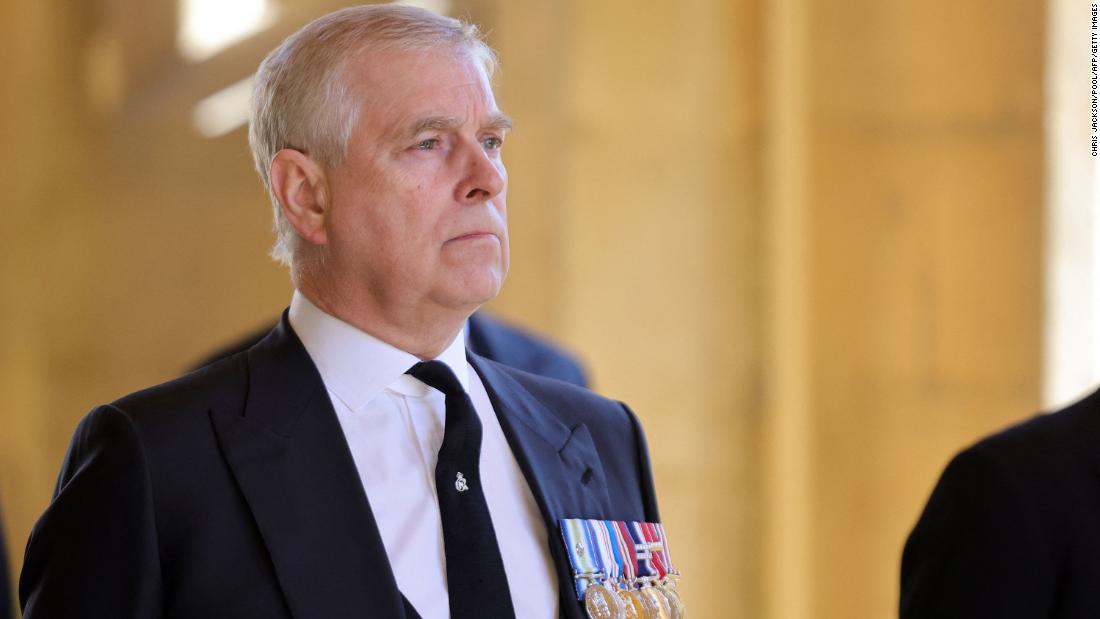 This is not the first time a member of the family has faced legal action, CNN historian and royal expert Kate Williams says. She points out that Prince Charles was sued by a law student in 1978 following an appearance in Ohio. The student sued for alleged deprivation of “various rights guaranteed by the (US) Constitution,” (though the case did not progress). And in 2002, Princess Anne became the first member of the royal family to be convicted of a criminal offense, pleading guilty to a charge when her dog bit two children in a park. But those cases pale in comparison with allegations of sexual assault of a minor.

Traditionally, the royal family has adopted the mantra of “never complain, never explain.” But that crisis management strategy of silence may not suffice this time.

Over the years, Andrew has become a recurring character in the Jeffrey Epstein saga. Back in 2019, he sat down with the BBC to answer questions about his links to the late disgraced financier and strenuously denied Giuffre’s allegations, saying unequivocally “it never happened.” These remarks led to a PR crisis of his own making.
That interview, conducted on palace grounds, ignited a firestorm after Andrew’s apparent lack of sympathy for Epstein’s alleged victims. The disastrous sit-down resulted in the prince’s effective exile from royal duties. In a statement at the time, Andrew said he was stepping back “for the foreseeable future” and promised “to help any appropriate law enforcement agency with their investigations, if required.” In the years since, Andrew has mostly stayed away from the public eye, choosing to hole up at his Royal Lodge property at Windsor.
Despite his public vow to aid officials investigating the alleged sex ring once operated by Epstein and his associates, US officials say otherwise. In January 2020, the then-US Attorney for the Southern District of New York, Geoffrey Berman, called out the prince, saying he had “provided zero cooperation.” Giuffre’s lawyers also say Andrew’s legal team have been “stonewalling” their efforts for information over the past year, leaving litigation the only course of action — which brings us to where we are today.

Andrew’s options at this point are by no means clear cut. According to Melissa Murray, professor of law at New York University, if Andrew’s legal team choose not to engage with the civil suit, it could open him up to a directed judgment and possible financial damages. “What (Giuffre is) seeking here is not his incarceration, not a finding of guilty, it’s not a criminal prosecution. It’s just a civil suit to take in money damages,” Murray explains.

Civil cases such as these rarely reach the jury trial stage, Murray says, and are instead more commonly resolved through summary judgment or by settlement, the latter of which could be a problem for the royal.

“He is on record as saying that he had nothing to do with her … and so any effort to settle at this point would appear to be a statement that there is some truth to her allegations,” Murray explains.

It should be noted that Andrew has never faced criminal charges. But Murray points out that if the case were allowed to proceed, it could open the royal up to further scrutiny.

“To allow this to actually go forward — to have discovery, take depositions, surface evidence — means that anything that comes up in this civil suit that is made public can then be used as a basis for criminal charges against him, or any other person whose name is surfaced in this particular dispute,” she says. “He has a lot of general exposure and things to think about at this point.”

Whichever way the court filing unfolds, there’s also the PR nightmare the family must now navigate, with royal commentators and legal experts suggesting there may be no coming back from this for Andrew.

Nigel Cawthorne, author of “Prince Andrew: Epstein and the Palace,” says there seems little recourse for the duke to return to public duties. “It’s very difficult to see how he can come back to the front line of the monarchy, as he’s expressed a wish to, with this suit pending or if a court finds against him in absentia.”

Alex McCready, head of reputations and privacy at London law firm Vardags, which specializes in handling the cases of high-profile clients, agrees that fallout from the suit could harm the family’s reputation.

“A ‘head in the sand’ approach by the Royal family will inevitably draw criticism from many quarters,” she says. “Whatever path Prince Andrew chooses to take, significant damage has already been done to his own reputation and, arguably, the wider Royal Family, which will be hard to mitigate.”

Hard to recover from but not impossible, according to Amber Melville-Brown, head of the media and reputation practice at international law firm Withers.

“As Prince Charles told broadcaster and author Jeremy Paxman the royal family is, after all, a soap opera. But if that’s the case the series isn’t going to be axed any time soon,” Melville-Brown says. “The monarchy is more than the sum of its family parts. Despite reputational attack it is a series that will not be cancelled, even in today’s cancel culture.”

She adds: “There is no ‘secret sauce’ of reputation rehabilitation that suits all tastes. Acceptance, regret, responsibility are some of the ingredients, dignity, empathy and positivity others, while continuing to get the job done is a key element.”

And that’s where the Queen excels, because everything she has done throughout her lengthy reign has been in service of her realms.

Despite this crisis, there is no evidence that the monarch’s reputation has been tarnished by the scandal yet. But in the era of #MeToo and amid a global reckoning on race, authority and privilege, that could change and Andrew will undoubtedly be aware how important his next moves are.

PHOTO OF THE WEEK

WHAT ELSE IS HAPPENING?

OK, so it’s not any old cake. A piece of Prince Charles and Princess Diana’s 1981 wedding cake sold for the “unexpected” amount of £1,850 ($2,565) at auction this week. It was originally estimated to fetch between £300-£500 ($416-$693), but interest spiked ahead of the sale, auctioneer Chris Albury told CNN. “It really seemed to capture a lot of people’s imaginations, and wallets,” said Albury, adding: “£1,850 was very unexpected.” The well-preserved 40-year-old slice has been kept in plastic wrap in an old cake tin. Read the full story here.

Harry was concerned about looking ‘weird’ in Meghan’s birthday video.

Actress Melissa McCarthy has spilled the beans on her recent collaboration with the Sussexes for Meghan’s 40th birthday comedy sketch. The “Bridesmaids” star called the couple “so sweet and funny” before praising them for “carving out their own lives,” in an interview with Access Hollywood. In the birthday skit, Meghan and McCarthy cracked jokes before announcing the duchess’ new charitable initiative, 40×40, which promotes supporting women as they return to work after the pandemic. McCarthy said she was “so pleased to be a part of it” and even shared a tidbit about Harry’s involvement. When discussing ideas for the skit, Harry revealed he could juggle but asked if that would look weird. McCarthy recalled saying: “I was like, weird, in a way that will make me watch it 5 million times.”

FROM THE ROYAL VAULT

Nestled in the lush Scottish Highlands, the Queen’s Balmoral residence is said to be one of her favorite places to unwind. This week, the 95-year-old returned to her cherished sanctuary in Aberdeenshire for her annual summer getaway.

The property has been in the family since 1852, when Queen Victoria and Prince Albert bought it, but the original castle was actually built in the 15th century. Through the generations, monarchs are said to have found “peace and tranquility” at the 50,000-acre estate.

Balmoral is a private residence owned by the family, rather than one of the royal palaces owned by the Crown Estate. “It’s the most beautiful place on earth. I think Granny is the most happy there,” Princess Eugenie said in the ITV documentary “Our Queen At Ninety.”

When asked why, the princess said: “Walks, picnics, dogs — a lot of dogs, there’s always dogs — and people coming in and out all the time.”

The family clearly enjoy the freedom of being outdoors without the spotlight. Other royal activities in years gone by included games and outdoor grilling sessions, with Prince Harry hailing the late Duke of Edinburgh as “master of the barbecue.”

Some members of the royal family have also been known to enjoy grouse-shooting on the local moors while many have joined spectators at the Braemar highland games, a competitive event that showcases Scottish athletes and musicians — sadly canceled again this year due to the pandemic.

“Despite the many difficulties in training and getting to the Games during the pandemic, everyone involved in Team GB has played a significant role in a magnificent performance.”

The Princess Royal, who is president of the British Olympic Association, wrote a moving message celebrating the team’s achievements at this year’s Games. Team GB won 65 medals in total, placing it 4th in the Olympic medal table overall.