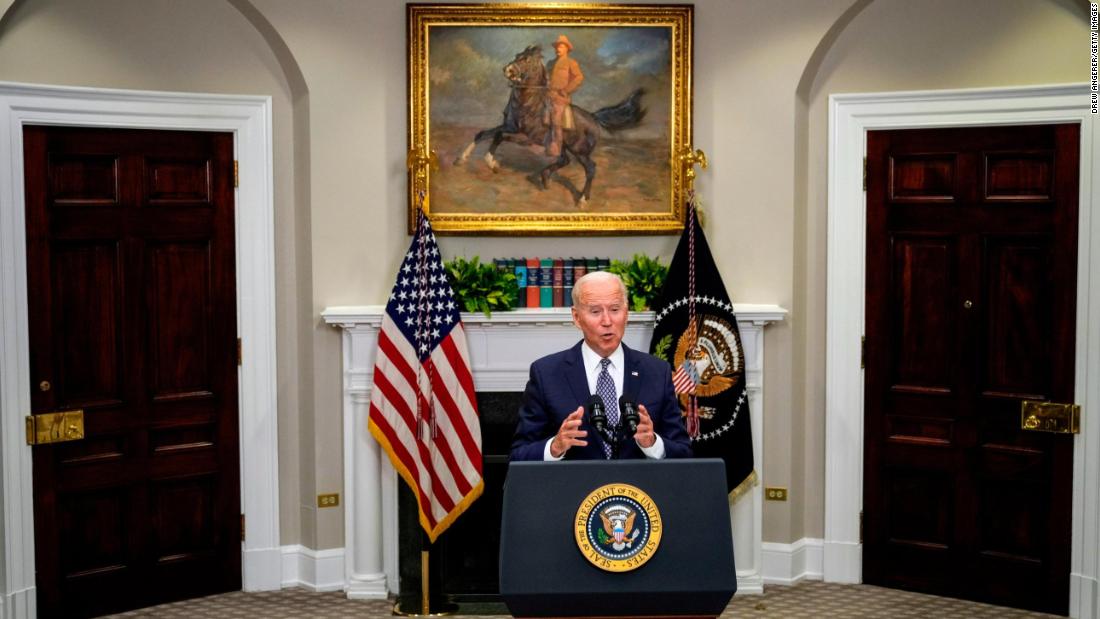 The warning came hours after a US defense official had told CNN that officials were alarmed by a “very specific threat stream” about the ISIS affiliate in Afghanistan, which planned to attack crowds outside the airfield.

Inside, thousands of troops are braving testing conditions and intense heat to fill cargo aircraft with US citizens and Afghans who helped American troops and officials and fear gruesome punishment by the Taliban.

The question now is how long the Pentagon will give the evacuation operation before it transitions to a mission to extract thousands of troops and materiel, which could take several days and curtail the departures of noncombatants.

That means a race against the clock to find and extract the remaining Americans who want to leave and likely means that thousands of Afghan translators and others could be left behind, in a final tragedy of America’s longest war.

But the intense military mobilization has bought Biden some political space, after the lightening collapse of the Afghan state and army directly contradicted his predictions that the Taliban would not suddenly seize power and force the United States into a hurried, humiliating retreat.

The operation has so far not cost a single American life. Biden told Americans this week that he would send no more of their sons and daughters to die in Afghanistan. And the fact that US troops are not actively seeking to round up American citizens far from the airport in Taliban territory — apart from a few publicly known examples — suggests the White House is keeping the risks of the operation as low as possible. But Washington is on edge, hostage to developments halfway across the globe. Any US fatalities, terror attacks or exchanges of fire with the Taliban could turn a crisis that is poised on a knife edge for the President into a full-blown political disaster, in addition to the human pain and loss they would cause.

As hundreds of Afghans reach US soil, meanwhile, attention is beginning to focus on how the US will absorb the refugees, with some Republicans, including ex-President Donald Trump, already attacking their arrival in a toxic political offensive.

US troops were already in a deeply vulnerable position on the airport, the last piece of Afghanistan they now control, after the enemy they spent two decades fighting, the Taliban, swept across the country in a lightning advance.

But the added threat from ISIS-K makes the situation even worse. The group is a sworn enemy of the Taliban and the US, so it has every reason to cause mayhem. It showed its awful potency in Kabul earlier this year in an attack on a school for girls that killed dozens of people, mostly children. Thousands of Afghans have been crushing against Taliban checkpoints in recent days, seeking access to gates controlled by US and allied soldiers. Any attack would have the potential to cause terrible casualties. ISIS-K’s ranks are believed to have been swelled by escapees from Afghan prisons and potentially a number of hardened fighters from Syria.

“It’s hard to overstate the complexity and the danger of this effort,” US Secretary of State Antony Blinken said on Wednesday. “We’re operating in a hostile environment in a city and country now controlled by the Taliban with the very real possibility of an ISIS attack.”

Blinken gave the most detailed breakdown yet of the number of Americans who may be in Afghanistan. He said US forces had so far pulled out at least 4,500 US citizens. He said the US had provided another 500 Americans with instructions on how to reach the airport safely. He said officials were inundating the remaining possible 1,000 citizens with emails, texts and calls. But he cautioned that some may have left of their own accord or may not in fact be Americans at all.

Among Americans still in the country are about 20 students from San Diego and their families who traveled to Afghanistan this summer and have been unable to get to Kabul’s airport, school and congressional officials told CNN.

Since August 14, more than 82,300 people have been flown out of Kabul, and in an intense 24-hour period from Tuesday to Wednesday, around 19,000 people left on 90 US and coalition flights, Blinken said.

But the fact that even US citizens appear to be having trouble accessing the airport means that potentially tens of thousands of Afghans eligible for resettlement in the US and elsewhere may have already lost their chances.

The Taliban had already said they would stop Afghan citizens from reaching the airport. But officials in Washington said they would do everything they could to get as many Afghans out by the deadline as possible.

“They will not be forgotten,” Blinken said. But perhaps ominously for those who want to leave in the next few days, he stressed that the US effort to save Afghans with ties to this country will not cease once the troops leave. It is not clear how that will happen.

“Along with American citizens, nothing is more important to me as secretary of state than to do right by the people who have been working side by side with American diplomats in our embassy,” Blinken said. “We are relentlessly focused on getting the locally employed staff out of Afghanistan and out of harm’s way.”

But the top Republican on the House Foreign Affairs Committee, Rep. Michael McCaul of Texas, told CNN’s Wolf Blitzer that his office was fielding messages from many Afghans seeking safe exits. Asked if US forces could extract all remaining citizens and eligible Afghans, McCaul answered, “I don’t think it is humanly possible.” He also cited what he said were credible stories of translators who had worked for the US being intercepted at the airport, taken home to see their families killed and then being beheaded themselves. CNN has not independently verified the reports.

Afghans who do manage to get out of the country are not being flown directly to the US. Many are being taken to holding centers in third countries, including Qatar. But those who have undergone security vetting and health checks have already begun to stream into the United States.

Several thousand evacuees have arrived in the US, including 1,200 who have reached the Washington, DC, area, said Maj. Gen. Hank Taylor, deputy director of the Joint Regional Operation.

A CBS News poll released over the weekend found that 81% of Americans thought that the government should help Afghans who had worked with US officials, troops and intelligence agencies come to the US.

But their arrival has already triggered what may turn into a new front of the bitter battle over immigration that Trump and other extremist Republicans have used to ride to power.

While still president, Trump made a deal with the Taliban to leave — behind the Afghan government’s back — which experts say contributed to the swift collapse of the state. And he made little accommodation for the tens of thousands of Afghans who risked their lives to help US forces and officials over 20 years and are owed sanctuary in return.

Now Trump is slandering many of those same Afghans, claiming — as he did with Mexico at the start of his 2016 campaign — that the Taliban are not sending the country’s “best” people to the United States.

“We can only imagine how many thousands of terrorists have been airlifted out of Afghanistan and into neighborhoods around the world,” Trump said in an inflammatory statement on Tuesday. “What a terrible failure. NO VETTING. How many terrorists will Joe Biden bring to America?” Actually, one of the reasons why the situation has been so chaotic has been the intense vetting that Afghans have had to endure to secure special immigrant visas to the US.

But the ex-President is not alone among politicians seeking to weaponize the Afghan arrivals to activate his base voters. Ohio US Senate candidate J.D. Vance, who’s competing for Trump’s loyalty in a crowded GOP primary, made a similar attempt in a web video this week, raising the possibility that the issue could be a burning concern of grass roots conservatives in midterm elections next year. Biden will seek to counter such demagoguery when he holds a virtual meeting with bipartisan governors who have shown willingness to temporarily offer refuge or help resettle Afghans brought out of Kabul.

And there was one rare, hopeful note on Wednesday after an otherwise wrenching week of news from Afghanistan, when the US military announced that a baby girl born on a cargo jet after a flight from Kabul to the US Ramstein Air Base in Germany had been named Reach, after the aircraft’s call sign.