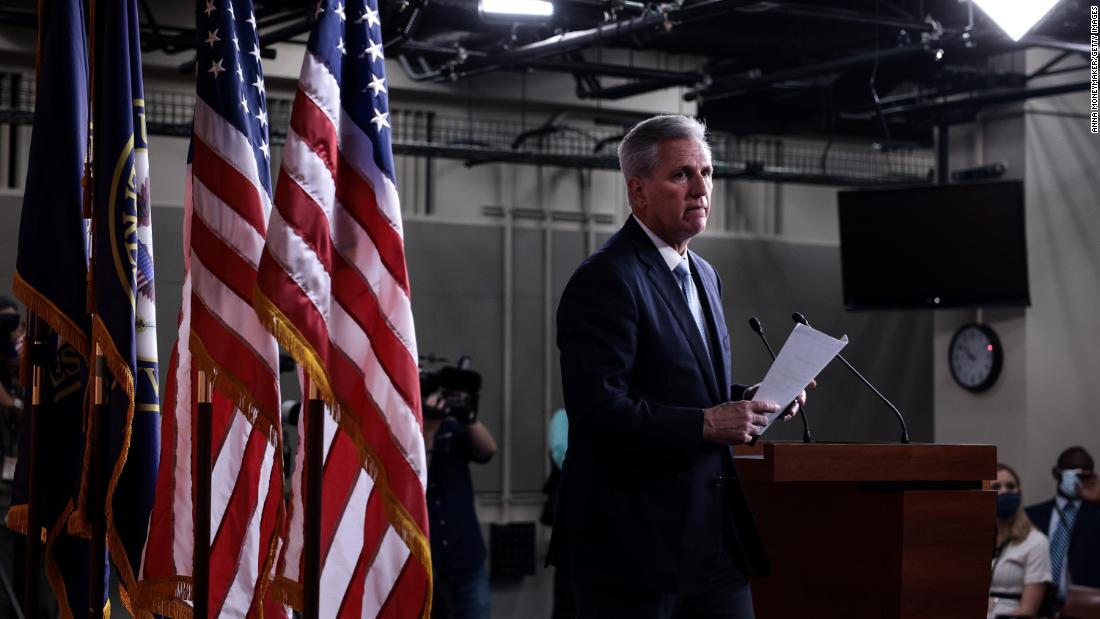 In the latest manifestation of the possible future House speaker’s hard right turn, he warned telecom and social media companies could lose their right to operate on US soil if they comply with any requests by the House select committee investigating the January 6 insurrection to turn over records of calls made by lawmakers.

His threat is best understood in the context of McCarthy’s role as the ex-President’s chief protector on Capitol Hill, after helping to scupper an independent commission into the worst attack on US democracy in modern history and joining the whitewash of what happened. He has also made clear he sees Trump as his best hope of capturing the House next November, after several visits to consult with the de-facto GOP leader, who retains a firm hold on his loyal base voters. Senate Minority Leader Mitch McConnell has made a different calculus when it comes to retaking the Senate. He also helped thwart that independent commission but has had a much icier relationship with the former President after blaming him for January 6, and Trump on Wednesday called for the Kentucky Republican to be “removed as the leader.”

The idea that a Republican House could simply close telecommunications companies on a whim appears fanciful and lacking any obvious legal basis. The Republican leader might simply have been trying to please his party’s most powerful figure and to engage GOP voters in a new political fight. Nothing would be more Trump-like than stirring the conservative media machine by making a bullying threat that he has no legal capacity or even an inclination to carry out.

Yet McCarthy’s warning was still one of his most extraordinary moves yet in the service of a twice-impeached former President who left office in disgrace after inciting the insurrection based on his multiple lies about election fraud.

In effect, a potential future speaker was warning he could use government power to punish private companies that comply with routine requests by a legally mandated committee probing a political mob that sacked the US Capitol.

This gambit suggests that a McCarthy majority would not just mount aggressive oversight of the Biden administration — for instance, over the Afghanistan withdrawal about which the House GOP leader has been highly critical. He also appears to be signaling that a Republican House would be an extension of Trump’s political machine, ready to do his political dirty work ahead of another possible presidential bid in 2024. The threat may also be a preview of a return of the crushing of constitutional norms that characterized Trump’s White House.

The idea of using power granted by voters to intimidate people or entities who don’t share radical political goals not only raises the possibility of abuses of power and the abandoning of rules and accountability necessary for a corruption-free economy. It is the kind of shake-down tactic that would be more expected in an autocracy like Vladimir Putin’s Russia than in a supposedly functioning democracy like the United States.

“A Republican majority won’t forget,” McCarthy said in his statement about the communications firms on Wednesday, slipping into the mobster speak that his mentor Trump is known for. The minority leader warned that if companies comply with requests to turn over private information, they risk “losing their ability to operate in the United States.” So far, there have been no such requests. The Democratic-led committee, which includes two Republicans who broke with their party to condemn Trump’s anti-democratic behavior, has simply asked telecommunications and social media companies to preserve records in case of future requests, as CNN first reported earlier this week.

McCarthy is on the same page on this issue as Georgia Republican Rep. Marjorie Taylor Greene, who has a record of spouting conspiracy theories and falsehoods about election fraud and is a favorite of conservative media.

Greene, who has repeatedly called for Biden’s impeachment — a demand not yet supported by McCarthy — told Tucker Carlson on Fox News this week that the firms would be “shut down” for cooperating with the select committee and “that’s a promise.”

Were it not for the events of the last year, this kind of warning coming from a Republican might be shocking but not taken especially seriously. But the idea that a President would inspire an effective coup attempt to try to stay in power after losing an election was unheard of too.

The GOP, in the House especially, has repeatedly shown that it has become unmoored from the principles of democracy and peaceful transfers of power. GOP Rep. Andy Biggs of Arizona, the leader of the conservative House Freedom Caucus, for example, is planning on sending a letter to McCarthy this week, CNN has learned, calling on him to change the rules to remove from the GOP conference Reps. Liz Cheney and Adam Kinzinger for serving on the January 6 committee.
And around the country, Republican legislators have been passing state laws that make it harder for Democrats to vote and easier for local politicians to intervene in the results of elections, based on Trump’s election fraud lies. Multiple Republican candidates for next year’s elections have bought into his fantasy world in which the election was stolen from him in an effort to win his critical support in primaries. One of those Republicans — Pennsylvania’s Sean Parnell — secured the former President’s backing for the state’s competitive US Senate race on Wednesday, with Trump saying that Parnell “got robbed…in the Crime of the Century,” when he lost his congressional bid last year.
And some Republicans refuse to drop violent rhetoric despite the outrage that occurred at the Capitol on January 6. North Carolina Rep. Madison Cawthorn, for instance, on Sunday pushed false claims about election fraud and suggested there could be “bloodshed” after future elections if they continued to be “rigged” and “stolen.” Multiple courts and Trump’s own Justice Department said that there was no evidence of widespread election fraud in 2020. But the former President and his supporters repeat the lie in a manner that looks certain to taint future elections as well.

In the seven months since Trump left office, his brand of conservative authoritarianism hasn’t waned. If anything it is getting stronger.

Apart from the dark suggestiveness of McCarthy’s threat, he may have solid political reasons for not wanting the select committee to get its hands on phone records, potentially from members of his own conference. Such records might help investigators establish whether Republican lawmakers were coordinating with Trump during the insurrection on January 6, or whether some of them spoke to the rioters themselves. McCarthy was not on the list of names the committee sent to companies for the purposes of safeguarding records, CNN reported. But the panel is likely deeply interested in his own call with Trump as the ex-President’s supporters forced their way into the Capitol and disrupted the certification of President Joe Biden’s election win.

Despite requests from CNN, the House minority leader has not yet publicly provided the text of the federal law he says the firms would be infringing if they cooperate with the select committee, which has subpoena power.

CNN legal analyst Elie Honig, a former federal prosecutor, said that McCarthy had no justification for his warning since the law would routinely stipulate that subpoenas from the committee should be complied with.

“McCarthy is just basically talking smack, trying to throw a monkey wrench into this procedure,” Honig said on CNN “Newsroom” on Wednesday.

In the shorter term, the California Republican could attract some form of censure for his comments. Some observers said he could face an investigation himself in the House Ethics Committee for acting in a way that brings the chamber into disrepute. Such a probe, however, could take months and is not likely to produce a meaningful sanction.

Attorney General Merrick Garland, however, has shown little appetite for taking on such politically radioactive cases.