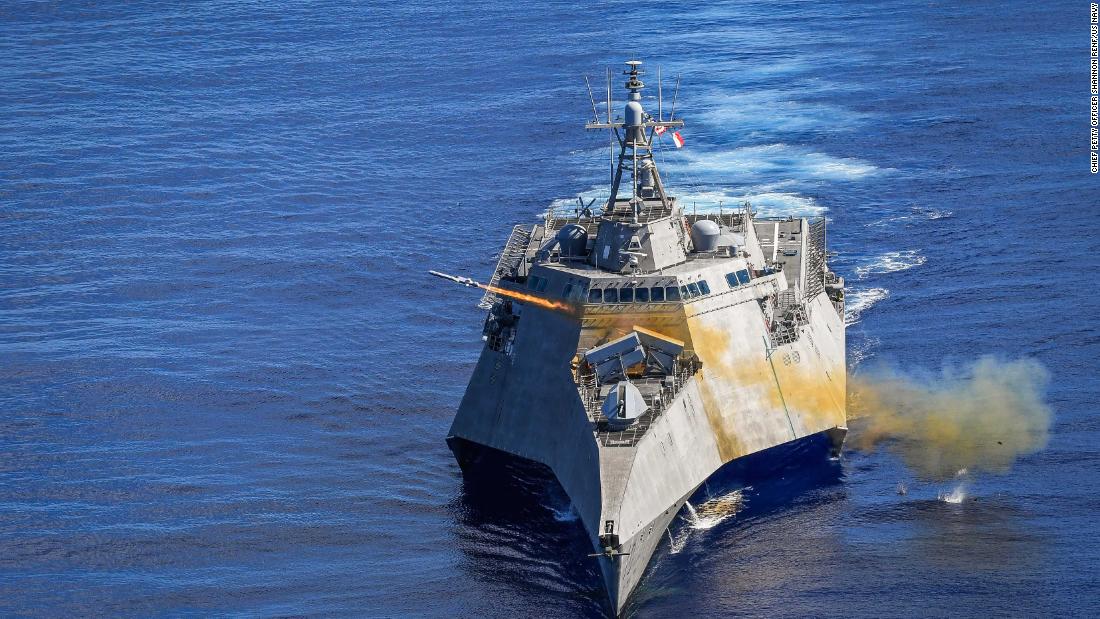 “The reason we are here is important,” Harris told the crew of the Tulsa on Monday night. “Our presence in the Indo-Pacific has a long, long history, including now, of helping to guarantee peace and security, freedom of trade and commerce, freedom of navigation … and open waterways, and the rules-based international order that has brought so much safety and prosperity to so many.”

US Navy leaders say the LCS, which is comparable in size to the more standard corvette class of ships, has an integral role in making that happen.

And they expect the LCS to play an even bigger part as the US faces a more robust Chinese presence in the South China Sea, emphasized by its growing fleet and fortified military installations built by Beijing on manmade islands.

“Beijing continues to coerce, to intimidate, and to make claims to the vast majority of the South China Sea,” Harris said in Singapore on Tuesday. She called China’s action’s “unlawful.”

China claims almost all of the 1.3 million square mile South China Sea as its sovereign territory and says the presence of US warships there are the cause of tensions and instability.

That has not stopped the US Navy from asserting itself in the waterway, where it regularly sends its ships for exercises and so-called Freedom of Navigation operations, which challenge Beijing’s claims to disputed islands.

Vice Adm. Bill Merz, who commanded the US Navy’s 7th Fleet until June, told an online defense conference earlier this year the Navy has plans to deploy up to eight LCS in the Western Pacific by the end of 2022, including having four operating out of a base in Singapore — where two are based now — by the end of this year.

“She kept out there pounding away, blowing up every Chinese operation in the South China Sea. It was pretty impressive work,” Merz said.

A 7th Fleet spokesperson later clarified the Giffords’ effectiveness in the South China Sea, telling CNN in an email that “nothing was actually ‘blown up.'”

“It is a trade term for influence,” Cmdr. Reann Mommsen said. “Without going into specifics, USS Gabrielle Giffords presence influenced operations throughout the South China Sea.”

Navy officials say the LCS is an ideal fit for the South China Sea environment.

Described by the US Navy as “perfect” for coastal threats, the small surface combatants can move quickly among islands features in the waterway, take cover from threats among those features and enter smaller ports than the 7th Fleet’s guided-missile destroyers, enabling easier cooperation with partner states in the region.

“When you put it in the archipelago with its low signature, high speed, it turns out it is very hard to target, very hard to kill,” Merz told the virtual Mine Warfare Association International Mine Technology Symposium in May.

To make the LCS more formidable, the Navy has upgraded the Pacific-based ships’ firepower, arming them with up to eight Naval Strike Missiles, sea-skimming cruise missiles that are difficult to spot on radar, and can maneuver to avoid enemy defenses.

Merz said that new firepower with the original designs of the LCS makes them ideal for the Pacific.

That upgrade has been noticed by the Chinese military, according to a 2020 Chinese government research paper reviewed by US Naval Institute News (USNI).

The LCS’ “cheap price, high speed, and other characteristics enable it to become a powerful tool in future distributed lethality tactics,” read the paper from the Marine Design & Research Institute of China (MARIC), USNI reported.

“Distributed lethality” means dispersing firepower among many scattered units, rather than employing it in one location, like an aircraft carrier strike group.

But analysts question what the LCS could do in any conflict with the People’s Liberation Army (PLA) Navy, which in the past year has surpassed the US Navy as the world’s largest fleet, while rapidly modernizing to where it has become arguably a near equal in ability to the US Navy.

The LCS “won’t last long if they come against a PLA Navy unit in a combat situation. That is an environment for which they were not built for, and speed doesn’t help you when missiles are flying,” said Carl Schuster, a former US Navy captain now an instructor at Hawaii Pacific University.

Blake Herzinger, a nonresident fellow at the Pacific Forum in Singapore, wondered if Merz was overstating the LCS’ effectiveness against China.

“The world’s largest navy is terrified of a littoral combat ship that has eight missiles on it? I don’t know about that,” said Herzinger, who is also a US Naval Reserve officer.

He said the LCS’ checkered mechanical record — the class has suffered a series of high-profile breakdowns since its introduction in 2008 — made it a poor choice for operations where it could come in close contact to the PLA Navy, like near contested islands in the South China Sea, much of which Beijing claims as its sovereign territory and has vowed to defend as such.

“I would lean away from putting it in positions where self defense becomes an issue,” Herzinger said. “You cruise one of those through the (contested) Spratlys and it breaks down, that becomes a big problem.”

‘A placeholder’ in the Pacific

In contrast to the analysts’ doubts, the US Navy is showing faith in the LCS, of which it has 34 in the fleet or in various stages of production. The LCS comes in monohull and trimaran variants and it is the latter that are based in the Pacific.

During a conference call with reporters earlier this summer, US Navy Capt. Tom Ogden, who commands the Destroyer Squadron 7, which oversees littoral combat ship operations in the region, noted that in 2019 and 2020, LCS performed three freedom of navigation operations — where the US Navy challenges what it calls excessive maritime claims of foreign nations — in the Spratly chain.

“They were sometimes in the right place at the right time, and it worked out with what 7th Fleet assigned the ship to do,” Ogden said.

Herzinger, the Singapore-based analyst, said mechanical problems have limited the ability of the LCS to be where it’s needed when it’s needed.

“The reputation of the LCS … has taken a big beating in Southeast Asia,” he said, with interactions with allies and partners scrapped.

“They had maintenance issues, they’ve had canceled exercises because the LCS couldn’t get there because it was broken,” he said.

But if it is reliable, it could be effective in showing the US flag and freeing up more capable platforms like destroyers and cruisers for more vital missions, Herzinger and other analysts said.

“The vessel could provide symbolic support and a localized military presence in disputed waters and thus free up higher end assets to be more dynamically employed or held at high readiness for warfighting scenarios,” said Sidharth Kaushal, research fellow for sea power at the Royal United Services Institute in London.

“It’s an effective use of a less-than-ideal asset,” said Herzinger.

Kaushal called the LCS “a placeholder” in the Pacific, filling a gap until new frigates, the first of which the Navy ordered in 2020, begin coming online in five years.

The Constellation-class frigates, of which a fleet of 20 are planned, will be equipped to conduct air defense, surface defense, anti-submarine and electromagnetic warfare operations in both littoral and open-ocean environments, according to government documents.

But with only two of the billion-dollar warships on order and their actual deployment being years away, the LCS-frigate situation shows just how stretched Navy resources are in the Pacific, Herzinger said.

He noted the Navy’s proposed budget for the next fiscal year has only four surface combat ships in it, and only one frigate.

“That’s not even enough to stay the same. That’s a Navy that’s shrinking,” he said. And in the short term at least, it leaves the Navy with no place to turn but the LCS.

“It’s better than having them tied up to the pier in San Diego,” Herzinger said. “It’s not the ship we needed, but it’s the ship we’ve got.”