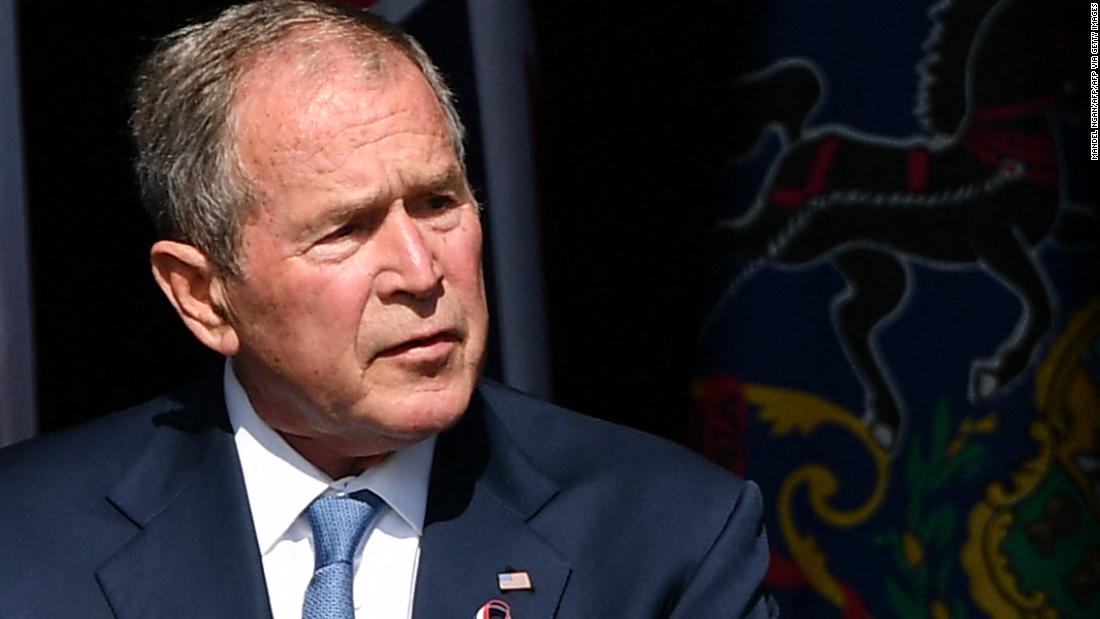 George W. Bush gave the speech at the Shanksville, Pennsylvania, site where Flight 93 was brought down — thanks to the heroics of the passengers who revolted against their hijackers. Here’s the key bit (bolding is mine):

“In the weeks and months following the 9/11 attacks, I was proud to lead an amazing, resilient, united people. When it comes to the unity of America, those days seem distant from our own. A malign force seems at work in our common life that turns every disagreement into an argument, and every argument into a clash of cultures. So much of our politics has become a naked appeal to anger, fear and resentment. That leaves us worried about our nation and our future together.”

Bush didn’t say Trump’s name there. He didn’t have to. If you have been alive and living on Planet Earth for the last 5 or so years, you know exactly who Bush is talking about with those words.

Since emerging as a candidate in the summer of 2015, Trump has spent his time and energy desperately trying to weaponize that which divides us. And he has done so for a simple and selfish reason: Pure political self-interest.

Trump understood from the jump that there was (and is) power in stoking resentments and anger. He aimed his message of victimhood directly at a White Americans barely clinging on to their dreams of being the middle class and said a) I understand you b) it’s not your fault and c) it’s the “elites” fault.

(Sidebar: The greatest trick Trump ever played on the American electorate was that he, a child of privilege who spent his entire adult life in New York City and who made his reputation on high-end luxury, was somehow the voice of the shrinking of the White working man.)

Trump’s entire 2016 (and 2020) campaign was built on the notion that elites were out to screw the average (White) guy. Here’s one particularly telling riff on that front from 2018:

What lies down the road of, to borrow Bush’s phrase, “anger, fear and resentment”? Unfortunately we already know the answer to that question. January 6 is what happens. An armed insurrection of Trump supporters fed lies about the 2020 election and convinced that they needed to, uh, take their country back.

What Bush is trying to do is offer a different path for his party. A path in which what we have in common with each other take precedence over what differentiates us. Again, Bush (this is long but important):

“On America’s day of trial and grief, I saw millions of people instinctively grab for a neighbor’s hand and rally to the cause of one another. That is the America I know.

“At a time when religious bigotry might have flowed freely, I saw Americans reject prejudice and embrace people of Muslim faith. That is the nation I know.

“At a time when nativism could have stirred hatred and violence against people perceived as outsiders, I saw Americans reaffirm their welcome to immigrants and refugees. That is the nation I know.

“At a time when some viewed the rising generation as individualistic and decadent, I saw young people embrace an ethic of service and rise to selfless action. That is the nation I know.

“This is not mere nostalgia; it is the truest version of ourselves. It is what we have been — and what we can be again.”

(By the way, am I the only one who heard echoes in that speech of James Earl Jones’ famous “people will come” speech in “Field of Dreams”? Especially this line from Jones: “This field, this game — it’s a part of our past, Ray. It reminds us of all that once was good, and it could be again.”)

Bush’s argument goes liker this: In our worst moment, when hate and division could have overwhelmed all of us, the opposite happened: We came together. Which means that at this moment of polarization, division and, yes, hatred, that could happen again.

Bush’s speech then is rightly understood as not only a denunciation of Trumpism but also an appeal to our better angels. Whether that appeal will fall on deaf ears remains to be seen.