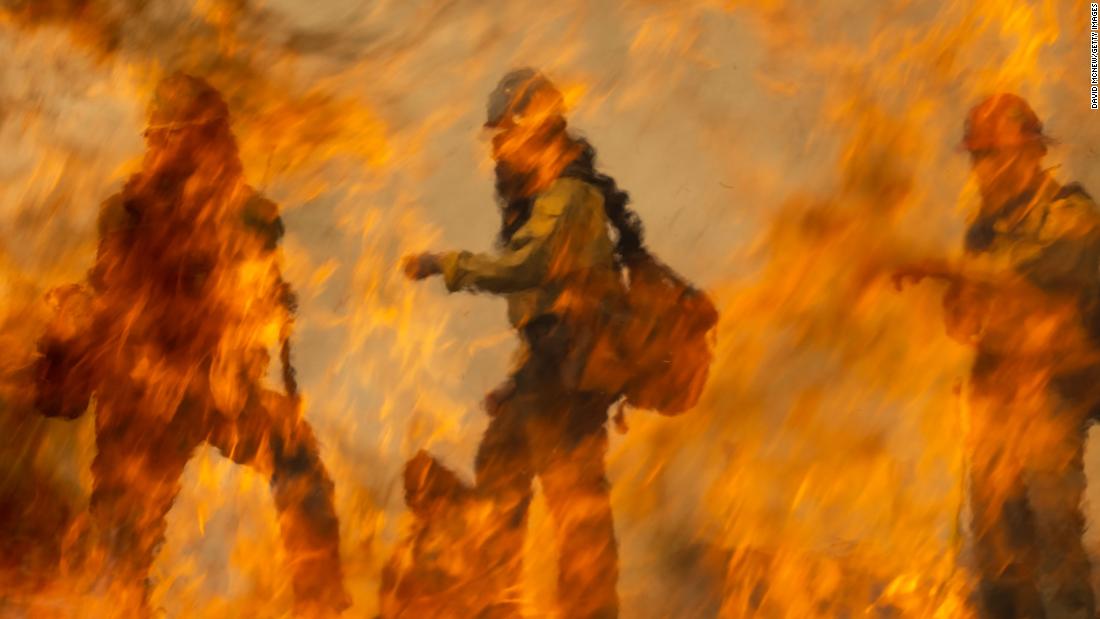 The new top fire priority is the Caldor Fire east of Sacramento, which is causing noxious air in Reno and threatening Lake Tahoe. Tens of thousands have been evacuated from homes in what’s become an annual frightening threat.
The air quality near Reno this week is at its worst it’s ever been — check the air near you at AirNow.gov — and there’s growing evidence that noxious smoke from the fires amplifies the severity of Covid outbreaks.
Particulate matter. Respiratory virus. Health crisis. “Covid-19 cases and hospitalizations have been climbing precipitously in the Reno area over the past several weeks,” according to CNN’s report. “Coronavirus cases in Washoe County on Monday were up 24% compared to the week before, and hospitalizations increased by more than 18%.”

A study published in the journal Science tied airborne particulate matter from wildfire smoke in 2020 to a surge in Covid-19 cases and deaths in California, Oregon and Washington.

“Fine particulate matter air pollution can be an additional vehicle for spreading the virus even faster,” said Francesca Dominici, a co-author of the study. “Considering that we are seeing an increased risk of cases from the Delta [variant] and we already have the wildfires, that’s going to be concerning.”

Smoke in the lungs. Here’s more from CNN’s Rachel Ramirez: “Fine particulate matter, or PM 2.5, is among tiniest yet also the most dangerous pollutants, and it’s one of the main components of wildfire smoke, according to the Environmental Protection Agency. When inhaled, it can travel deep into lung tissue and enter the bloodstream, and it is linked to a number of health complications: asthma, heart disease, chronic bronchitis, and other respiratory illnesses — all underlying conditions that make people vulnerable to severe outcomes from Covid-19.”
RELATED: Tracking wildfires in the US
Staying inside on the smokiest days. The smoke in Reno triggered a Stage 3 Emergency air quality advisory this week and residents were encouraged to stay inside with doors and windows closed. Where some kids wait for snow days, in parts of sunny California and nearby in Nevada they’re checking the air quality each day for school closures. Reno’s schools were back in session today after being closed Monday and Tuesday.
As of now, 95% of the West is experiencing drought and seven western states are under air quality alerts resulting from 92 active wildfires. Read more here about the data.
The threat of fires is expected to run at least through September and wildfire season in Southern California is only just getting started.
It’s almost always fire season now. The recent experience of Americans on the West Coast is that fire season is a tired concept. As a report on the USDA website argues, fires can now occur for much of the year, with winter snows melting earlier, rains coming later, trees susceptible to beetle infestations and grasses helping fires spread more quickly. The fire threat is changing with the environment, according to USDA, and so communities will have to adapt and the government will have to beef up its fire fighting capabilities outside of summer.
RELATED: These 7 states are under air quality alerts as wildfires rage in the West

Covid can be controlled by vaccines. Governments are less far along addressing climate change. It underlies the increasing severity of wild fires, according to a landmark UN report out in August, which suggested the earth has warmed 1.1 degrees Celsius over pre-industrial levels and is approaching the 1.5 degrees that countries agreed would be a tipping point. Wildfires are thought to be a major symptom of that change.

RELATED: Why wildfires happen: Debunking the myth that arson is to blame more than climate change
What will government do about the climate? Democrats in Washington are trying to find a way around a GOP filibuster to pass a massive $3.5 trillion infrastructure bill that, among many other things, aims to slash US greenhouse gas emissions by throwing money at energy companies to increase clean energy production and tax incentives to spur an electric vehicle revolution. That measure passed the House this week, but its path to becoming law is not set in stone.

Climate refugees? Maybe not yet. Clearly the government will have to do things in the short term and long term to address the fire threat. Another question is what will people do?

Read this story by CNN’s Vanessa Yurkevich, who talks to Adriana Nichols, a woman who moved from New York to Los Angeles 17 years ago, but would now like to leave LA.

“It is profoundly a different wish list. A place where we have [running] water, where we are not … having bags packed in case fires evacuate us,” said Nichols.

But the alternatives she’s finding all have some element of climate risk. Floods, like those that killed 18 people this week in Tennessee. Hurricanes. Heat.

Yurkevich includes data from Redfin that confounds the notion of climate displacement in the US.

“Counterintuitively, people are moving to places with higher climate risk,” Daryl Fairweather, chief economist at Redfin told her. “And it seems like climate, although it’s something that people care about, is at the bottom of the list or it’s not the top priority.”