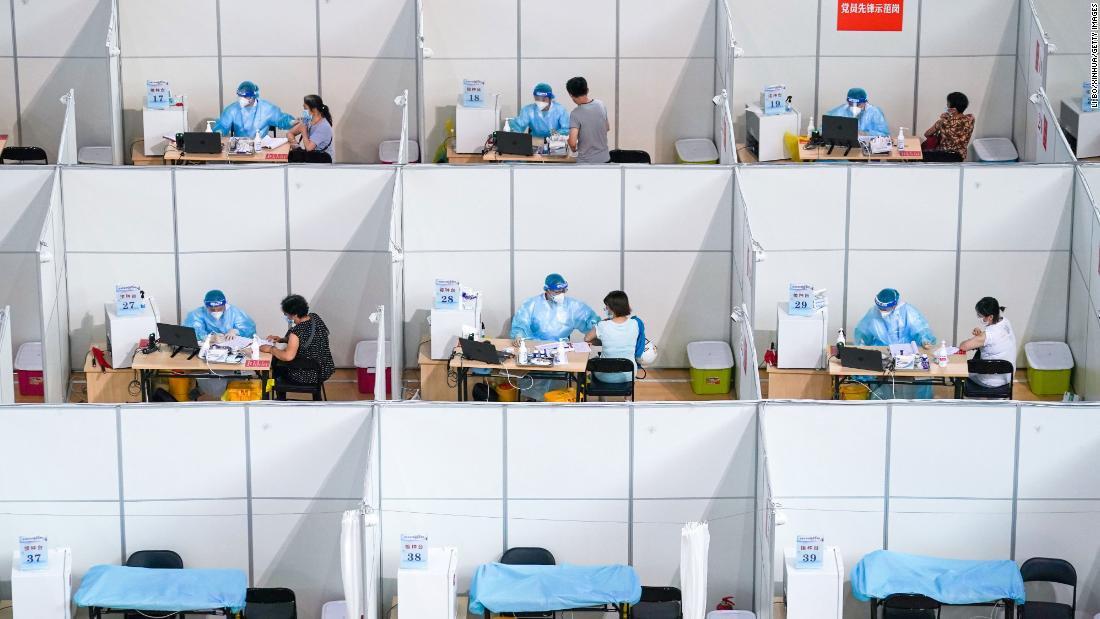 As of Wednesday, China had administered more than 1.98 billion doses of its domestically-produced Covid-19 vaccines, according to the National Health Commission (NHC), accounting for 40% of the 5 billion shots given globally.
That’s a billion shots given in just 10 weeks, after the country passed its first billion mark in June — putting China ahead of the United States and the United Kingdom in doses administered per 100 people.
China’s push to boost vaccination rates has accelerated since July, when the highly contagious Delta variant sent infections rising across the country. While the outbreak now appears to be waning — with the daily caseload lingering in the single digits, the inoculation drive has continued to gather pace.
Speaking at a health conference last Friday, China’s top respiratory expert Zhong Nanshan said the country is aiming to fully vaccinate 80% of its 1.4 billion population by the end of the year.

China’s latest inoculation campaign has targeted the elderly, minors and residents in the country’s vast rural areas — hard to reach groups that had not been covered in earlier vaccination rounds.

In the southern province of Guangdong, a 111-year-old villager rolled up his sleeve last week to receive a coronavirus vaccine shot. In some remote areas, officials arranged home pickups and bussed in residents to vaccination sites.
The NHC has repeatedly stressed that vaccinations should be voluntary. But under pressure to get more shots into arms, local authorities are increasingly turning to coercive measures to ensure compliance.
Across the country, a growing number of localities have banned unvaccinated residents from accessing public services, including hospitals, schools and public transport.
In the southwestern metropolis of Chongqing, district governments announced that residents who refused to be vaccinated without a legitimate reason would impact their social credit — a controversial nationwide system that uses big data to incentivize certain behaviors.
And in Qinghai province, a residential community issued a notice this week, warning residents their pensions, medical insurance and social allowances would be suspended if a member of their immediate family failed to get vaccinated. An official said the notice was meant to “scare” people into getting inoculated, because the community had not met its vaccination target, state-run news reported.
These measures have drawn wide criticism and anger on Chinese social media, with many users accusing local authorities of violating the central government’s policy and making the voluntary vaccination drive de facto mandatory.

Yanzhong Huang, a senior fellow for global health at the Council on Foreign Relations, said the discrepancy between central government policy and its local implementation is a typical occurrence in China’s top down political system, where provincial officials are placed under tremendous pressure to meet policy targets set by Beijing.

“Failure to fulfill these targets will lead to penalization, creating this incentive for local government officials to undertake heavy-handed measures to get things done,” he said.

In a sign of the mounting pressure, multiple municipal governments have warned local officials they would be “seriously held accountable” if infections broke out among the unvaccinated. Some local authorities have complained that residents have been lured across borders to inoculation sites in neighboring towns by cash rewards — as officials compete to meet vaccination targets.
Despite the growing vaccination rates, there are no signs that China is preparing to relax its strict zero-Covid approach, or open up its borders anytime soon.

But Huang with the Council on Foreign Relations said he remained skeptical, given the lower efficacy rates of Chinese vaccines and the surge of Delta variant breakthrough infections across the world.

In Israel, where 78% of those 12 and older have been fully vaccinated (mostly with the Pfizer/BioNTech vaccine), daily cases have surged in recent weeks, and authorities have started to offer booster shots to older citizens.

Chinese health officials earlier also floated the idea of a booster shot, but so far have not revealed any concrete steps toward the plan. On Monday, state broadcaster CCTV warned the pandemic has not ended and that people shouldn’t become careless in epidemic prevention.