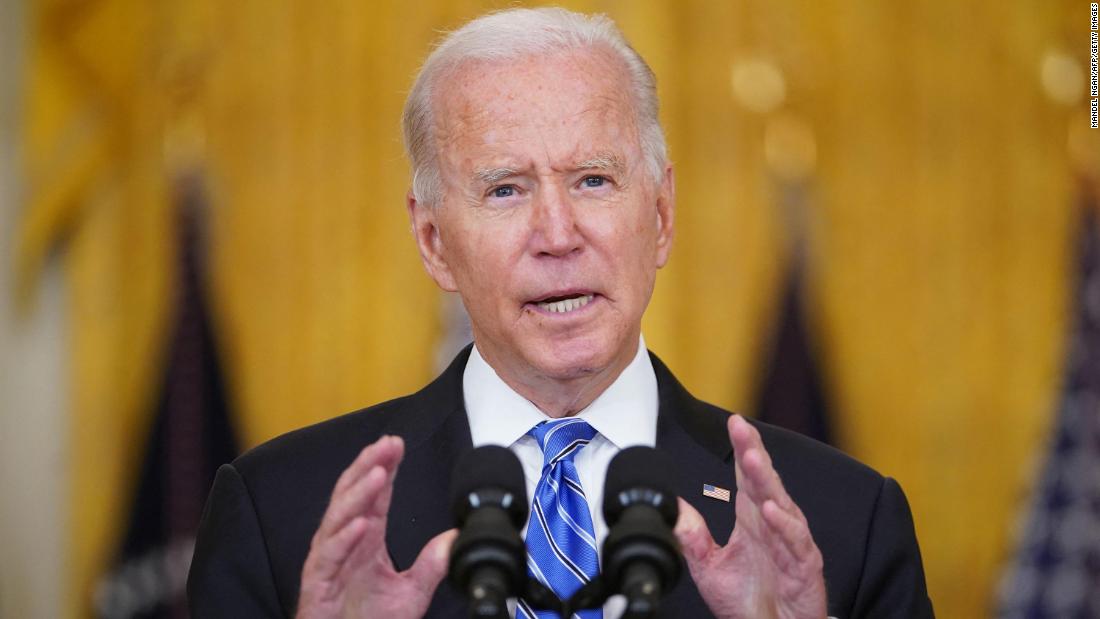 His huge gamble on more than $4.5 trillion in infrastructure spending and an exit from America’s longest war, which threatens to trigger a foreign policy disaster, are both unfolding in a dramatic August that could define his presidency. Alongside these twin historic pushes, the story of Biden’s administration is also being shaped by a resurgence of the pandemic that he thought he had beaten and is deepening the national political estrangement he vowed to heal.

The Senate passage of a bipartisan $1.2 trillion traditional infrastructure package was a huge win for Biden on Tuesday and validated his promise to try to heal bitter divides and mistrust in a nation that is politically at war with itself.

A companion $3.5 trillion budget resolution focused on “human” infrastructure muscled through the Senate with only Democratic votes early Wednesday morning and could reshape the economy and American society by funding home health care, community college and climate initiatives.

The bills still face a complicated future in Congress before they become law. But they represent Biden’s biggest statement of his lifelong creed that the power of government can be wielded to help working Americans. The spending, one of the most significant government efforts to alleviate poverty and economic pain in decades, are also an attempt to drain the sense that the country had failed millions of heartland Americans, a feeling that helped fuel the populist outburst that led to the election of Donald Trump in 2016.

“I am committed to making sure that our historic economic recovery … this time reaches everyone and eases the burden on working families — not just this year, but for the years to come,” Biden said Wednesday.

But as with his Afghanistan policy, Biden is also courting significant risks. Republicans are already seizing on the burst of spending to portray Democrats as profligate and dedicated to “socialism-style” deficit busting in a bid to weaken their foes in next year’s congressional elections.

Biden’s triumph in the Senate unfolded as the news from Afghanistan becomes ever more alarming and increases the likelihood of a Taliban takeover, which will be seen as the direct consequence of Biden’s decision to get all US troops home. It may also be seen by foreign foes as a humiliation and a sign of weakening US power.

The lightning advance of the Taliban, routed by US troops 20 years ago for harboring Osama bin Laden, has shocked everyone in Washington. It has now seized nine provincial capitals, including the country’s second largest city, Kandahar. Foreign embassies are discussing draw downs and there are signs that the capital Kabul could tumble, ending a democratic dream bought with the blood of thousands of Americans.

Any equivalent pictures of US helicopters leaving the roof of the US embassy in Saigon in the retreat from the Vietnam War could become emblematic of Biden’s presidency, just as much as a possible future bipartisan signing ceremony with Republicans at the White House for the infrastructure bill.

The potential downsides of an Afghan withdrawal help explain why former Presidents Barack Obama and Trump eventually decided they couldn’t fulfill their ambitions to end that war.

“America, it is time to focus on nation building here at home,” Obama said in a speech from the White House in June 2011, when he announced that he would pull 10,000 troops from Afghanistan by the end of that year.

But at the end of his second term, the former President trimmed his own last effort to wind down the war when he decided that he could keep 8,400 troops there until he left office. He justified his decision by saying the security situation was precarious amid Taliban gains and that the Afghan government needed more time to build its forces.

Trump was no less enthusiastic about ordering American forces home, having seized on US exhaustion with a decade-and-a-half of foreign wars to help drive his 2016 election campaign.

For years, he had criticized the Afghan deployment.

“I agree with Pres. Obama on Afghanistan. We should have a speedy withdrawal. Why should we keep wasting our money — rebuild the US,” Trump tweeted back in 2013.

But Trump, like Obama, found that vowing to end wars set up difficult expectations for his presidency. In 2017, he actually increased the US garrison to battle terrorism. By the time he left office, he had soured on the war again, and reached a deal with the Taliban that would have seen all US troops out by May 1 year, a deadline Biden slightly extended.

The current President plans to mark the 20th anniversary of the September 11 attacks by saying he ended US involvement in the “Forever War.” But he looks likely to be greeted with a split screen of Taliban victories in Afghanistan.

Where Trump and Obama failed on infrastructure

Both Obama and Trump also struggled with the other half of Biden’s double play this week — infrastructure reform.

“We must rebuild our infrastructure and find new and clean sources of energy,” Obama said in that same White House speech in 2011 — but he was unable to mount a serious push for a bill as Republicans used congressional power to stifle his domestic agenda.

After making a fortune as a builder, Trump was seen as ideally placed to pass his own infrastructure bill — especially as Democrats were keen to find something on which they could agree.

But his botched efforts degenerated into self-parody as a string of themed “infrastructure weeks” foundered on his own ill-discipline and the chaos and wild lurches of his West Wing.

The blame for the mess in Afghanistan does not all rest with Biden.

The failure to build a viable nation and armed forces has its roots in four administrations. After all, US forces won the war against the Taliban and routed al-Qaeda in a few months after the September 11 attacks. Then the US and its allies spent the next 19 years losing the peace — including with a diversion into Iraq.

CNN reported on Wednesday that Kabul could be isolated by the Taliban in the next 30 to 60 days. Their return would again raise the question of whether Afghanistan could be a haven for terrorist groups planning attacks on the United States.

If the chaos in Afghanistan worsens, Biden will have to answer for the brutal takeover by the Taliban, a fundamentalist group that suppresses women and girls’ rights and implements a harsh form of sharia law.

Biden, who has long been a skeptic of the prolonged US troop presence in Afghanistan, is however adamant that the darkening picture in Central Asia will not get him to change his mind.

“No,” he answered on Tuesday when asked by a reporter if current events would modify his exit plan. The President instead put the emphasis on the Afghans to provide their own security — with backup from US airstrikes and funds.

His response might seem callous given that millions of Afghans face a return to the dark ages of feudal Taliban rule. But it represents a cold-eyed judgment of the national security interests of the United States, a kind of updated “America First” for the Biden era.

Biden rejects the notion that the US needs to stay in Afghanistan now for the same reason that it always did — to prevent the lawless, war-torn nation from again becoming a terror haven that could threaten the US homeland.

It’s true that an extremist group could choose any number of failed states to form a base. And while the fight against Islamic extremism was a signature of international relations two decades ago, it has been superseded by a new era of great power competition and cyber conflict with nation states like China and Russia.

Ultimately, Biden has reached a conclusion that if the US doesn’t leave now, it will never get out.

“When will it be the right time to leave?” Biden asked in April.

His if-not-now-then-when attitude also seems to be driving the President’s use of what may be a narrow window of political power — with midterm elections looming next year — to also fulfill his infrastructure ambitions.