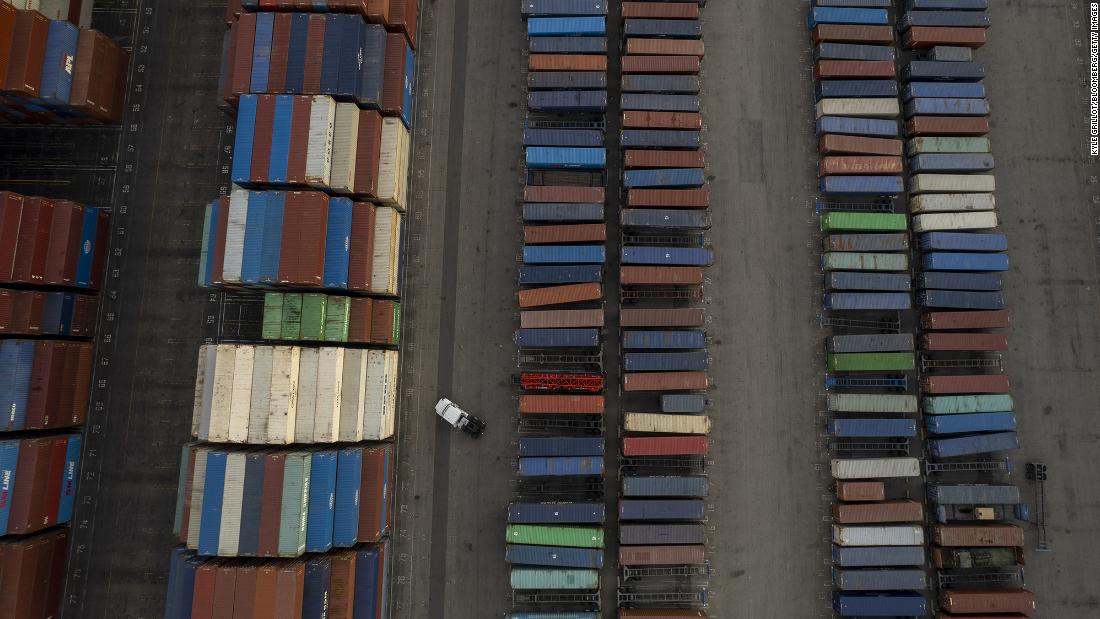 Industry sources described the effort as a significant move that will help, but hardly end, the supply chain crisis that’s hovering ominously over the US economy this holiday shopping season.

“The White House is doing the right thing,” said Moody’s Analytics senior economist Tim Uy. “But I wouldn’t characterize it as a gamechanger. It’s a step in the right direction.”

The move to 24/7 operation should pave the way for a 10% increase in container flow, Moody’s estimates. In the absence of any action, Uy said, the situation would have gotten far worse.

‘This is a global issue’

“The move to 24/7 operations is appreciated and welcome,” said Geoff Freeman, CEO of the Consumer Brands Association, a trade group that represents Coca-Cola, Kellogg and dozens of other major companies.

However, Freeman, who was part of Wednesday’s virtual roundtable with Biden officials, described this as “low-hanging fruit” and a “relatively obvious next step.” He noted this won’t solve the problem of a lack of trucks and drivers to get the goods out of ports.

One issue: There is only so much the federal government can do on its own. The system is controlled in large part by private businesses, including trucking companies, warehouses, port operators and railroads.

The bigger challenge is the sheer scale of this supply chain nightmare.

It goes well beyond the traffic jam of container ships parked outside the Ports of Los Angeles and Long Beach and includes a worldwide shortage in truck drivers, trucks, computer chips and other components -— as well as the hundreds of thousands of seafarers stuck at sea due to countries having different Covid-19 and other rules.

That’s not to mention the congestion at other ports, including in Savannah where a staggering 80,000 containers are reportedly stacked up -— even though the port is already working around the clock.

“This is not a situation where the US can fix everything by itself. This is a global issue,” said Uy.

That’s why, despite the moves announced by the White House this week, the Moody’s economist is sticking with his call made earlier this week that the global supply chain crisis will get worse before it gets better.
The majority of chief financial officers polled by Duke University earlier this fall expect supply chain problems to persist well into 2022. Just 10% anticipate these difficulties going away this year.

Others are more optimistic.

JPMorgan Chase (JPM) CEO Jamie Dimon told reporters Wednesday there’s a “very good chance” that a year from now “we won’t be talking about supply chains at all.”

That would be terrific news, considering the significant ripple effects the supply chain crisis is having now. Shortages and shipping problems are helping to drive up prices at an alarming pace.

Consumer prices surged by 5.4% in September, tied for the fastest 12-month jump since 2008. New car prices rose by the fastest pace since 1980, a reflection of the worldwide computer chip shortage that has forced Ford (F), General Motors (GM) and other manufacturers to slash production.

Corporate America is scrambling to put out fires caused by these logistical problems.

Costco (COST) is limiting the purchase of toilet paper, paper towels and other cleaning supplies. Nike (NKE) warned container shortages, a lack of workers and other problems will impact the production and delivery of its sneakers and other goods around the world. Other retailers including Adidas, Hasbro and Crocs (CROX) have warned of similar problems.

All of this means shoppers this holiday season should brace for higher prices, fewer options and longer shipping times.

Although the supply chain crisis has been driven in large part by Covid-19, the pandemic merely exposed vulnerabilities that had been festering beneath the surface for years or even decades.

“We are relying on supply chains that were built generations ago. It’s one of the reasons why this entire year we have been talking about and working on infrastructure and are eager to see Congress to act to get this infrastructure deal through,” Transportation Secretary Pete Buttigieg told CNN’s Brianna Keilar Wednesday.

The shortage of truck drivers remains the weakest link in global supply chains. It’s the same reason gas stations in the United Kingdom recently ran out of fuel and helped contribute to gasoline shortages in the United States earlier this year.

“If the truck driver shortage continues, and I imagine it will, port congestion could very well come back,” said Uy, the Moody’s economist.

Would deploying the National Guard help?

This explains why some business leaders are calling for further action.

Freeman, the consumer trade group CEO, told CNN that he urged Biden officials during Wednesday’s meeting to consider new approaches, including using temporary visas to fill vacant jobs and the “targeted use of” the National Guard to address bottlenecks wherever they form, including removing cargo from ships or getting cargo out of shipyards.

“While we are not at a point now that it needs to be implemented….we feel it’s important that everything is put on the table,” Freeman said.

It’s a step that has been taken previously during Covid, including to distribute vaccines, help hospitals and drive school vans. In the UK, the army was deployed to deliver fuel to end days of shortages.

“Everyone I talk to within the consumer packaged goods industry believes the strain is only going to become greater in the months ahead,” Freeman said.

There is no indication the White House is actively considering the use of National Guard members in the supply chain crisis.

“We continue to evaluate and monitor and all options are on the table,” a White House official said in a statement to CNN, adding that Biden officials will assess ideas discussed with private sector stakeholders.

Supply chain experts did not dismiss the idea of using the National Guard.

“Anybody should welcome out-of-the-box thinking at this point. Because it truly is a disaster,” said Douglas Kent, executive vice president of strategy and alliances at the Association for Supply Chain Management.

Yet Kent said “band-aid approaches” like deploying the National Guard won’t solve the longer-term problems, including the shortage of workers.

The supply chain crisis was years in the making. No one should expect it to go away overnight.