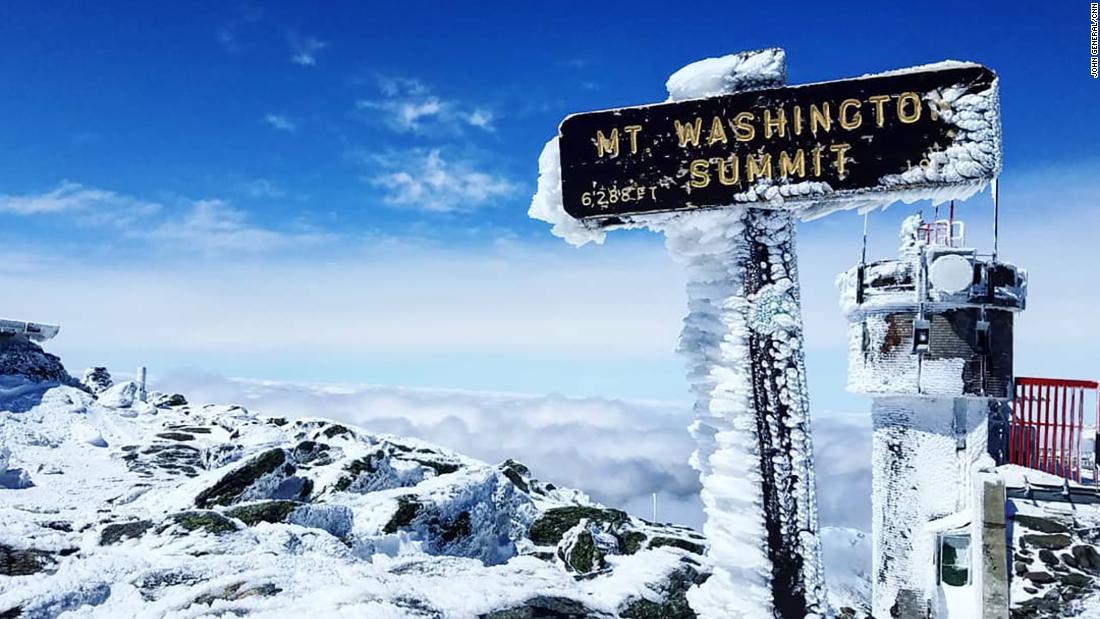 Jackie Bellefontaine rattles off her badges of honor. Coldest weather she’s been in: 50 degrees F below zero. Fastest wind speed she’s been hit with: 120 miles per hour (her body was immediately thrown and pinned against a wall). She’s dodged flying ice chunks and skirted crevices in ice fields that threatened to swallow her whole.

“I felt so alive being in that cold of a temperature,” she told CNN during a video call, perking up her shoulders in excitement at the thought of subzero temperatures.

One might think she’s calling me from Antarctica. But Bellefontaine is in New Hampshire. She’s sitting in the radio room of the Mount Washington Observatory.

It’s the first week of June, and just over an hour’s drive south from the mountain the weekend forecast calls for 93 degree heat. Bellefontaine laughs at the contrast.

“We had a little bit of snow [this past weekend]. People were picking up snowballs and were like, ‘It’s May! There’s snowballs!'” she said.

Bellefontaine is a weather observer and educational specialist at the weather observatory on top of Mount Washington — notorious for having some of the world’s most chaotic weather.

Bellafontaine’s workdays at the summit start at 6 a.m. and run until 6 p.m. She’ll do this for a week before taking the bus (or snow cat in the winter) down to the base of the mountain for a week off. On top of collecting weather data, she shows obvious excitement during the video call for her responsibilities as an educator.

She says this all with a boastful pride; not in a cocky sense, but one where saying it out loud is her way of pinching herself, proving that it’s not a dream. In fact, it’s a reality where childhood dreams have started to come true. After all, she’s only 22 years old.

Some may call her crazy. Indeed, her friends jokingly do, but Bellefontaine humbly laughs it off. A recent graduate of the University of Maine, she’s joining the global coalition of scientists bound together to solve our climate crisis — one that has been linked to extreme heat. Part of a younger generation that grew up with the endemic issue being a mainstream conversation, Bellefontaine is, perhaps, a window into the climate scientists of tomorrow.

The White Mountain National Forest, designated so in 1918, pokes through the clouds in northern New Hampshire. Driving into the range, it’s impossible not to notice how quickly you’re forced to crane your neck back against the car window to catch a glimpse of the peaks (if they’re not hiding above the clouds).

Mount Washington dominates the range as the tallest among them. While it’s not the Himalayas, the mountain is no joke. Its records include the fastest wind speed recorded outside of a cyclone: 231 miles per hour. And during the winters, it’s a regular contender with Antarctica for the coldest place on Earth.

At 6,288 feet in elevation, the mountain’s extreme weather comes to many as a shock and has led to more than 160 deaths since the mid-19th century, according to New Hampshire Magazine.

“We are close to a layer in the atmosphere called tropopause, and you can kind of think of that as the cap of where weather is allowed to exist. And what’s happening is also we have a lot of low pressure systems,” Bellefontaine said.

Her hand gestures point to her right in muscle memory and she quickly realizes she doesn’t have her usual map handy that she uses during educational sessions.

The low pressure system, combined with the Presidential Range’s v-shape geography, compresses and accelerates winds that slam against the mountain’s peak.

For Bellefontaine, the lure of Mount Washington’s extreme weather has long captured her attention. Born and raised just outside of Boston, she spent ample time in the area growing up.

“Washington to me always seemed legendary, especially when I wasn’t a hiker, because of the sheer size of it, the extreme weather,” she said. “I would have expected that maybe to be out in the Himalayas or something. Not right in my back door.”

Given Mount Washington’s extreme weather and prominent elevation, it serves as an important observation point for scientists trying to address climate change and better understand our complex world — a crisis that has long motivated Bellefontaine to pursue studying the climate.

“I do feel that climate change in mainstream media has been a call to action. I have talked to many of my peers in various fields (from science fields like marine biology, to law, to business) that are interested in doing their part in understanding and mitigating climate change,” she wrote in an email.

Alice Kelley, who was Bellefontaine’s academic advisor at one point and has been University of Maine’s undergraduate coordinator for nearly 40 years, agrees that many more younger scientists are interested in studying our climate.

“I think it’s critically important for the next generation of scientists coming up who are interested in the environment and climate change to have a really strong understanding of the science of climate change,” Kelley told CNN.

The importance of understanding our climate stretches far beyond just those immediately interested in the science, Kelley adds.

“I think for people to be most effective in dealing with climate change, be it in journalism or policy or any of those other fields — really understanding the science of what’s going on in the background is really important,” she said.

Brian Fitzgerald, director of education at Mount Washington Observatory, has been watching closely as Bellafontaine’s career begins to sprout.

“Just the other day she was telling me, ‘You know, I think I could see myself doing some type of teaching in the future,’ where that is something she hadn’t considered in the past,” he told CNN. “It just seems pretty natural for her right out the gate.”

That may be because Bellafontaine herself sees Mount Washington’s extreme weather as a natural talking point into our climate.

Using the mountain’s weather as an introduction into climate change education has gotten easier in recent years as the science has become more widely accepted.

“Certainly I would say that from, particularly, the interns and staff that we’ve seen in recent years, that that seems to be true,” Fitzgerald said. “I think there is generally a greater interest and empowerment around [talking about climate change].”

Bellefontaine was eager to explain that the job doesn’t come without its share of fun.

“We’ll take out sleds like little toboggans and just go across the [observatory’s] deck. A lot of fun experiments like we just go throw water up in the air and see how that freezes. People want to see if they could get their jeans to freeze so they can prop them up and prank the night observer,” Bellefontaine said with a chuckle.

Commotion can be heard in another room. Bellefontaine’s shift is ending and her replacement for the week has arrived via the observatory’s commuter van. At the base of the mountain perhaps she’ll be reminded of the Earth’s warming temperatures. Humid heat and biting black flies await her, but so do plenty of minds to educate.

“I feel like science education has a very important role in climate change, and I feel like I’m doing my part by helping these younger kids understand what’s happening and what they can do to help,” she said.