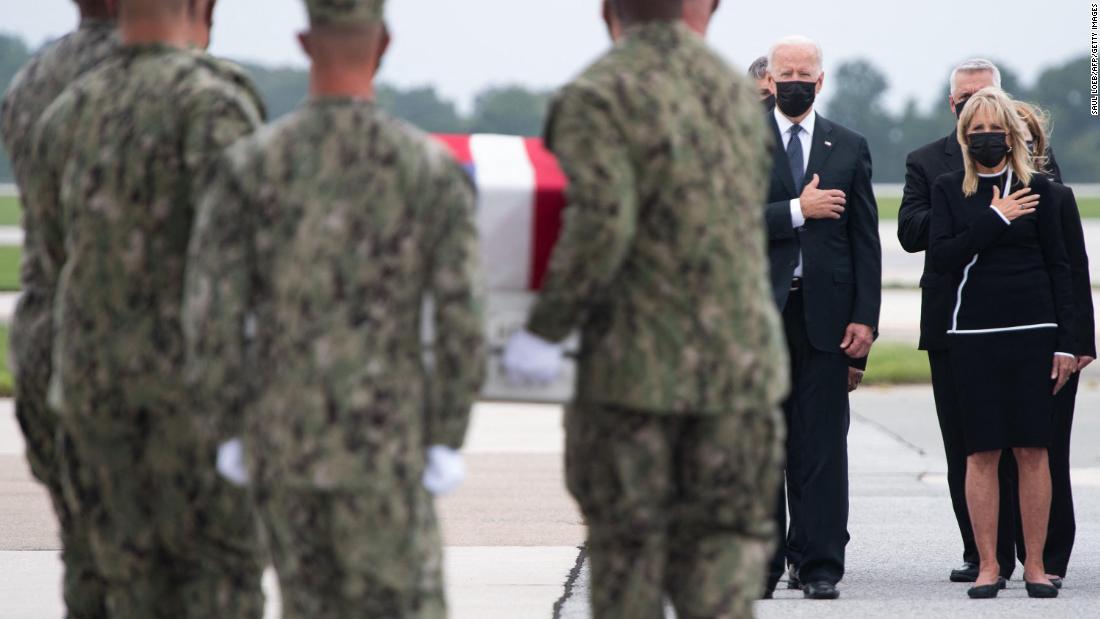 Biden’s visit comes amid several weeks of military upheaval and emotional fallout in the wake of President Joe Biden’s decision to adhere to the August 31 deadline for removal of US troops in Afghanistan, officially ending America’s longest war. Last week, 13 members of the military, including one Marine who was based at Camp Lejeune, were killed in Kabul, by a suicide bomber.

The 13 service members killed in Thursday’s terrorist attack included 11 Marines, one Army soldier and one Navy corpsman. The youngest were 20 years old and the oldest was 31. They came from Massachusetts, California, Nebraska, Indiana, Texas, Missouri, Wyoming, Ohio and Tennessee.

Sergeant Nicole L. Gee, 23, was among the dead. Gee was stationed at Camp Lejeune, where she was a maintenance technician with the 24th Marine Expeditionary Unit. It was not immediately known whether Gee’s family would be among those Biden meets with in person on Wednesday.

According to a statement from the East Wing, the first lady will “hold private meetings and engage in a listening session with several military and veteran family members” during her brief visit to Lejeune. The trip was closed to press coverage at the behest of Biden’s office.

One of Biden’s core initiatives as first lady is Joining Forces, which she founded a decade ago with former first lady Michelle Obama. Joining Forces serves to support military families and veterans’ families, including the impact of emotional health for those families.

On Sunday at Dover Air Force Base in Delaware, the President and the first lady were present with the families of the 13 fallen service members as their remains were returned to American soil.

The dignified transfer service was fraught with grief and raw emotion, with reports afterward that some of the family members were frustrated with Biden. White House press secretary Jen Psaki said Tuesday to reporters seeking clarity on Biden’s exchanges with the families that those conversations were “private.”

“His message to all of the family members who were there and those who were not even in attendance is that he is grateful to their sons and daughters, the sacrifice they made to the country,” Psaki said. “That he knows firsthand what it’s like to lose a child and the fact that no one can tell you anything or say anything or there’s no words that are going to fill that hole that is left by that.”

Jill Biden on Sunday tweeted out the names, ages and hometowns of the 13 fallen members of the military, adding, “We will always honor your legacy and the sacrifice of your families.”