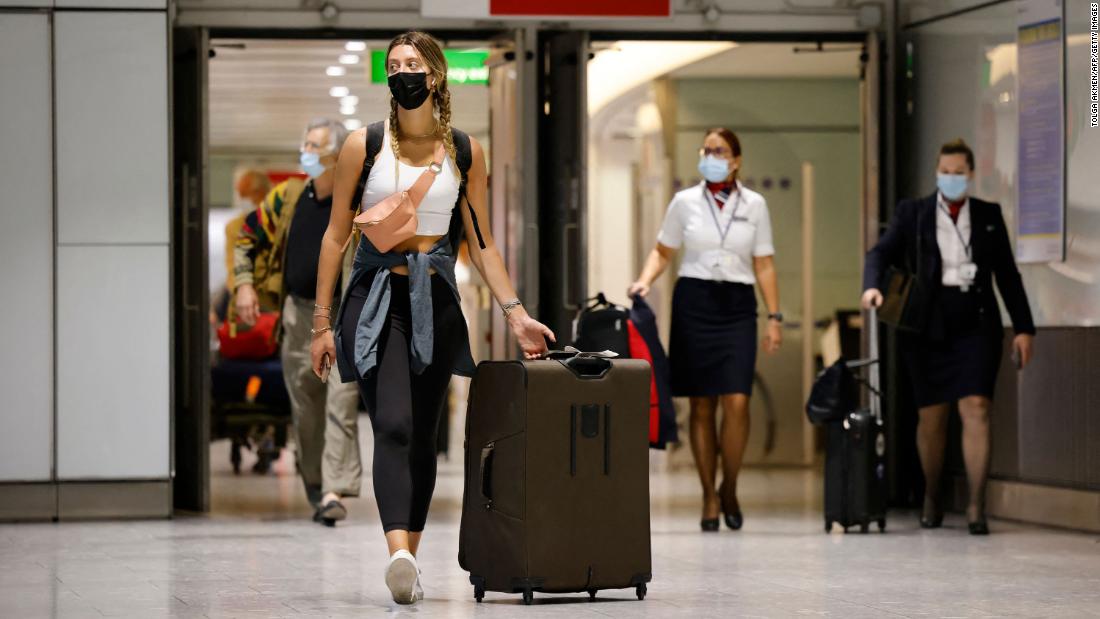 (CNN) — The UK government announced Friday it is simplifying its controversial traffic light travel rules and removing mandatory Covid tests for vaccinated travelers returning to England from countries on its safe list.

Grant Shapps, the UK transport minister, said in a series of Twitter posts that as of October 4, the current red-amber-green country lists that govern arrivals into England would cease to exist. In their place will be a “simpler” red list of no-go destinations.

The new system will help in “striking the right balance to manage the public health risk as No.1 priority,” Shapps said.

In addition, he said, eight countries will be removed from the red list on October 22, including Turkey — a popular destination for UK vacationers — Bangladesh, Egypt, the Maldives, Oman, Pakistan, Sri Lanka and Kenya.

The UK will no longer require pre-departure tests before arrival into England for fully vaccinated travelers coming from non-red list countries starting from October 4, said Shapps.

“From later in October, (fully vaccinated travelers) will be able to replace the day two PCR test with a cheaper lateral flow,” he added, referring to the test required two days after arriving in England.

Travelers who test positive for Covid-19 will have to quarantine and take a confirmatory PCR test at no additional cost, “which would be genomically sequenced to help identify new variants,” according to the statement published by UK government on Friday.

According to Shapps, the updated measures are aimed at reducing costs and are possible due to the higher levels of vaccination in the country.

“Public health has always been at the heart of our international travel policy and with more than 8 in 10 adults vaccinated in the UK, we are now able to introduce a proportionate updated structure that reflects the new landscape,” said Shapps in a statement.

The move, which does not cover international arrivals to the other UK nations — Northern Ireland, Scotland and Wales — is likely to be welcomed by travelers and the wider travel industry, however, some say it doesn’t go far enough.

“Across the entire pandemic, the UK’s travel rules have been two steps behind the rest of Europe,” says Willie Walsh, the director general of the International Air Transport Association. “This has devastated the UK’s travel industry with countless job losses.

“While the measures announced today are a move in the right direction, there is no reason to delay scrapping the wasteful and ludicrously expensive PCR testing regime for fully vaccinated travelers. If it’s the right thing to do, let’s get on with it.”

Julia Simpson, president and CEO of the World Travel and Tourism Council, also praised the move but called for more action

“The Travel & Tourism sector has been rocked by the pandemic losing 62 million jobs globally,” she said in a statement. “We are pleased to see the back of an illogical traffic light system that caused confusion and distress for travelers. This move to ease restrictions and open up more key destinations, will help restore consumer confidence and get the UK moving again.

She added: “While this is certainly a step in the right direction, for the UK to be real leaders, the government should adopt a system based on the risk of individuals, not countries. Placing whole countries on red lists is illogical if you can keep the UK safe by checking an individual’s status and allowing fully jabbed people to travel almost anywhere in the world safely.”