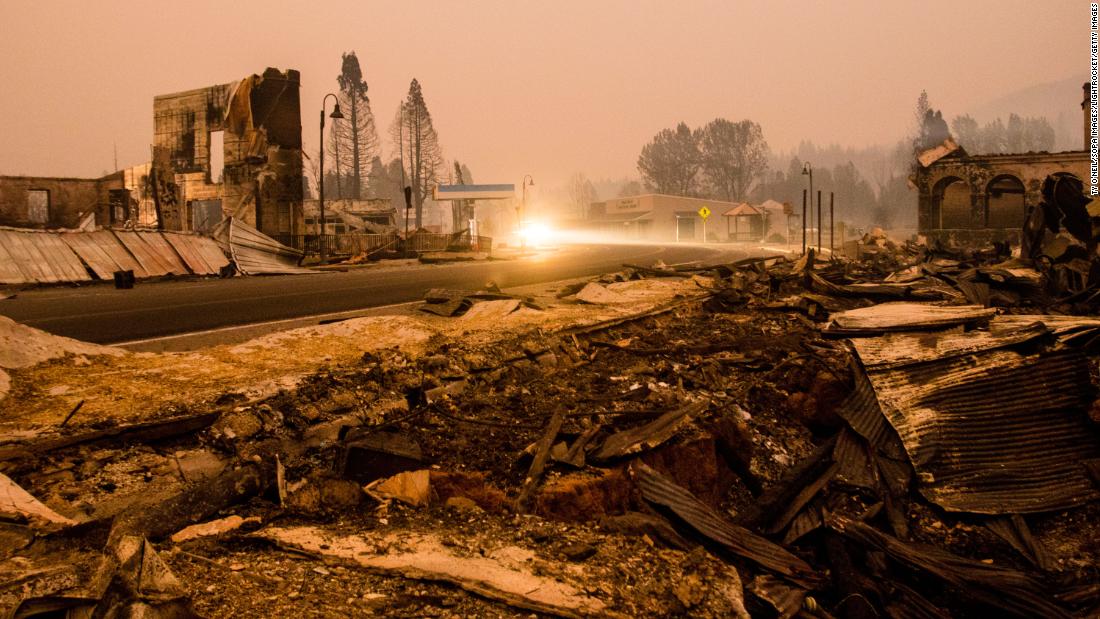 A community of fewer than 1,000 people in California’s Indian Valley, Greenville was such an idyllic mountain town it was the place where people wanted to rebuild their lives.

That’s what Joan Carter and her husband, Dan, hoped to do, after their Berry Creek home — roughly 70 miles away — burned down in the Bear Fire last year.

“We fell in love with the people of Greenville,” Carter said. “It was a community to us more than a place.”

They had just laid down their new home’s foundation in early summer when the Dixie Fire roared in, leaving little behind but charred ruins. A little more than a week ago, authorities announced a mandatory evacuation order had been lifted and residents could return to the area unescorted for the first time since the blaze.

Drawn by the strong sense of community, the Carters, and others who lost everything — even for a second time — are ready to rebuild again and help the community recover.

Back in Berry Creek, Joan Carter had persuaded her husband to buy a trailer after watching the nearby town of Paradise disappear in the Camp Fire’s flames.

The trailer was what they used to escape from the Bear Fire, taking with them several prepacked “fire boxes” — filled with family photographs and memories from more than 70 years of their lives — that Carter kept by their home’s door.

They returned to find nothing but ashes.

“I didn’t have any thoughts that it wouldn’t be gone,” she said. “The kinds of fires that we’re experiencing now are mega-fires.”

Still mourning the loss of their home and several neighbors, and after a long, tough process of navigating insurance payouts, they sold the property and soon began rebuilding in Greenville.

But in early August, the Dixie Fire torched much of the town. The blaze, on its way to becoming the largest wildfire in California’s history — started in July and has since burned through more than 959,000 acres across Butte, Tehama, Plumas, Shasta and Lassen counties, according to fire officials. It is roughly 62% contained.
The Carters are living in their trailer in Quincy and their daughter set up a GoFundMe to help them cover expenses, including for living in RV parks and winterizing the vehicle as colder weather approaches — until they are able to go back to their Greenville property.

“When this happened again, we just said we’re done running,” Carter said. “It’s a small place, we know each other, and we suffer together and we’re going to triumph together.”

From her previous experience, Carter said the community’s journey to recovery won’t be easy — especially for residents in Greenville that are for the first time faced with loss from a wildfire. But she’s hoping she and her husband can help their friends navigate what’s next — and the emotions that come.

“You have to mourn and go through all the steps of mourning. At first you’re just paralyzed, it’s overwhelming and you don’t know where to start and that’s what Dan and I are hoping we can contribute to these people in the Dixie Fire,” she said. “There’s anger because especially in a fire like this one, the Dixie Fire or the (Camp) Fire, it was caused by negligence of a human being.”

Cal Fire officials said in 2019 that California’s Pacific Gas & Electric power company was responsible for the Camp Fire, noting that electrical lines owned and operated by the utility started the fire amid extremely dry and windy conditions. The company has pleaded guilty to 84 counts of involuntary manslaughter and one count of unlawfully starting the blaze. Nearly two months ago, PG&E said the Dixie Fire may have been sparked by equipment it manages.

“Our faith gets us through,” Carter said. “In the Bible, God says ‘I will give you beauty for ashes.’ And heaven only knows we’ve got plenty of ashes.”

‘I don’t want to avoid the difficult and ugly’

Greg Walsh was also new to Greenville. He moved to the small community after his two-bedroom, 1940s bungalow in Paradise was destroyed by the Camp Fire.

Much like the Carters, Walsh had moved to his Paradise home for retirement, looking for a quiet place to live that was surrounded by nature. He lost both his home and two friends in the Camp Fire.

After couch-surfing for several months before purchasing an RV, he settled in the area of Wolf Creek in Greenville in May 2019.

“I immediately felt like home here,” he said. “I felt like it was such a healing place.”

Soon, he bought a home: a century-old structure he had just finished furnishing this summer. What he loved more than most, he said, was the people he met.

“There are ranchers that have been there for generations, Indigenous (people), artists, people from Burning Man, people that came up in the 70s … really quite a mix,” he said. “It’s not just losing your house, it’s the whole community.”

While he was visiting family, when the Camp Fire swept through Paradise, he heard so many stories and watched so many clips of what it was like to evacuate the town, that when the Dixie Fire approached Greenville, Walsh said he began having “visions” of the previous evacuation and quickly fled as the flames approached.

After his second home burned to the ground, he decided he was going to go back and start over. With the help of a local business that has been working to help fire survivors, E&J’s Mobile Kitchen, Walsh connected with a California resident who gave him an RV after his previous one was charred.

In a few months, he plans to station it on the property he will start rebuilding his home on. In the meantime, he says he wants to continue working with the mobile kitchen to help other fire survivors. And when he returns to Greenville, he says he wants to do his part and help his community heal.

“I have the resources, I could go some place beautiful again but any place that I go to live, if it hasn’t burned yet, it’s going to be, sooner or later,” he said. “I want to go back to Greenville and help the community because I don’t want to avoid the difficult and ugly thing in life.”