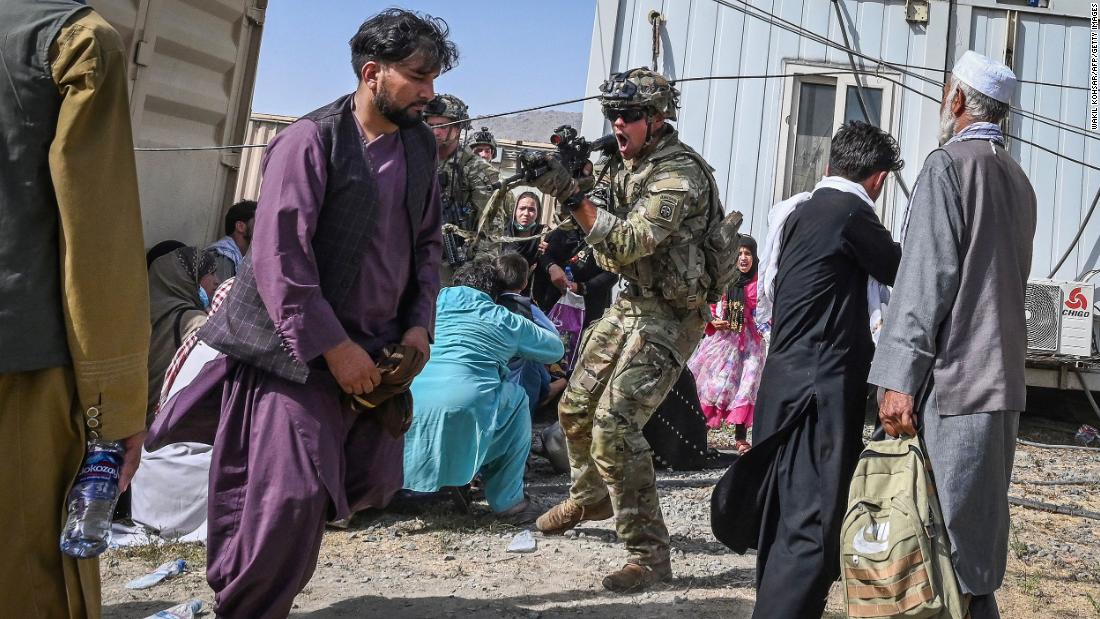 The situation at Hamid Karzai International Airport is “stabilizing,” the UK’s foreign secretary said on Tuesday, a day after crowds of locals poured onto the tarmac and clung onto military planes, searching for a way out of the city.

Western nations continued the rush to get their citizens away from the site, with hundreds of evacuations planned for Tuesday. US President Joe Biden, who is facing intense scrutiny over his handling of the withdrawal of US forces, has ordered 6,000 more troops to the airport to assist American efforts there.

But many Afghans are having to wait for news of whether they will be offered a path out, as the country’s immediate neighbors — and nations further afield — brace for a possible humanitarian and refugee crisis.

Taliban co-founder and deputy leader Mullah Baradar has arrived in Afghanistan, a spokesman for the Taliban’s political bureau said Tuesday. It marks the first time Baradar has set foot in the country for 20 years, and comes 11 years after he was arrested in neighboring Pakistan by the country’s security forces.

Baradar was a prominent member of the Taliban regime when it was last in power, and his return will fuel concerns that the nature of the new government will mirror that era.

Across Afghanistan, people are waiting to find out what kind of regime they will live under — and whether those who supported the US-backed government over the past 20 years will face retribution from the Taliban.

In a televised briefing on Tuesday, a member of the Taliban’s culture commission said the group would grant amnesty to government and public sector workers.

“They should be coming to their work and continuing their work,” Enamullah Sama Ghani said during the address. “We do not want them to go anywhere or to become migrants or to become deprived of their work.”

In an audio message distributed widely through Taliban channels, the group’s deputy leader Maulvi Mohammad Yaqub also told fighters not to “enter into homes of people or confiscate their cars.”

But those promises have been met with skepticism by the international community, and instances of intimidation have already begun.

In a press conference on Tuesday, spokesman Zabihullah Mujahid framed the Taliban’s seizure of power as a victory over imperialism, telling Afghans: “After 20 years of struggle to clear the occupation, that is our right and we are honored to have gotten this right.”

He insisted there would be “no violence against women” in Afghanistan, but said the international community should respect the Taliban’s “core values.”

Pressed on whether women could go to work, he said the rights of women would be determined within the framework of Sharia Law. “In all sectors in society, where they are required, it will be within this framework,” he said.

Despite those partial assurances and the early overtures of the group to international media, the homes of two female journalists were visited by members of the Taliban on Sunday, a contact of the women told CNN, adding that both women were left severely shaken by the incidents.

According to the source, one of the female journalists whose home was visited by fighters said: “I am very worried about my safety and that of my family.”

Several female journalists are said to have received threatening calls from the Taliban, with the calls increasing over recent days, the source added.

One prominent female journalist in Kabul said she had received a threatening call from the Taliban, telling her they “will come soon.”

Following the Taliban’s takeover of Kabul, CNN spoke with Taliban fighters on Monday. One said female journalists would still be able to practice their profession as long as they adhered to a series of rules. Female journalists would be expected to wear the niqab, and should not engage with men outside of their family, he said.

There have been fewer women in the streets of Kabul since the Taliban’s takeover on Sunday.

Though tension is rife in the Afghan capital, particularly among women, some have continued to work publicly in the first days of Taliban rule. On Tuesday, Saad Mohseni, director of Moby Media Group, tweeted an image of his network’s “brave female journalists out and about in Kabul this morning.”

US looks to contain fallout

The UN’s High Commissioner for Human Rights on Tuesday urged the Taliban to keep their promises. “They have … pledged to be inclusive. They have said women can work and girls can go to school. Such promises will need to be honoured, and for the time being — again understandably, given past history — these declarations have been greeted with some scepticism,” Rupert Colville said in a statement.

Many of those seeking a way out of Afghanistan are meanwhile awaiting news on when and how nations will grant asylum.

European Union foreign ministers are holding an emergency meeting on Tuesday to discuss the situation in the country, and the EU has called on “all parties” to facilitate the “safe and orderly departure of foreign nationals and Afghans who wish to leave the country.”

But Europe is on alert for a looming refugee emergency. In an address on Monday night, German Chancellor Angela Merkel urged the international community to increase aid to Afghanistan’s neighboring countries to prevent Afghan asylum seekers from traveling on toward Europe.

In many of the world’s capitals a blame game has already begun, with leaders questioning how a two-decade war — the longest the United States has ever fought — could unravel so suddenly.

“No one saw this coming. Of course we would have taken action if we had,” UK Foreign Secretary Dominic Raab told Sky News on Tuesday.

President Biden struck an unapologetic tone in an address on Monday in Washington D.C, admitting the speed of the Taliban’s resurgence took his administration by surprise but laying a large portion of blame at the feet of Afghan forces, Afghanistan’s former government, and his predecessor Donald Trump.

But Biden himself has faced heavy criticism at home and abroad, and whether his argument will be accepted by America’s allies remains to be seen.

“Yes, our competence is being questioned,” a senior White House official admitted to CNN on Tuesday, as the administration sought to contain the fallout from their chaotic exit. “The only way to fix that is to stabilize the airport and safely withdraw Americans and our partners to the best of our ability.”