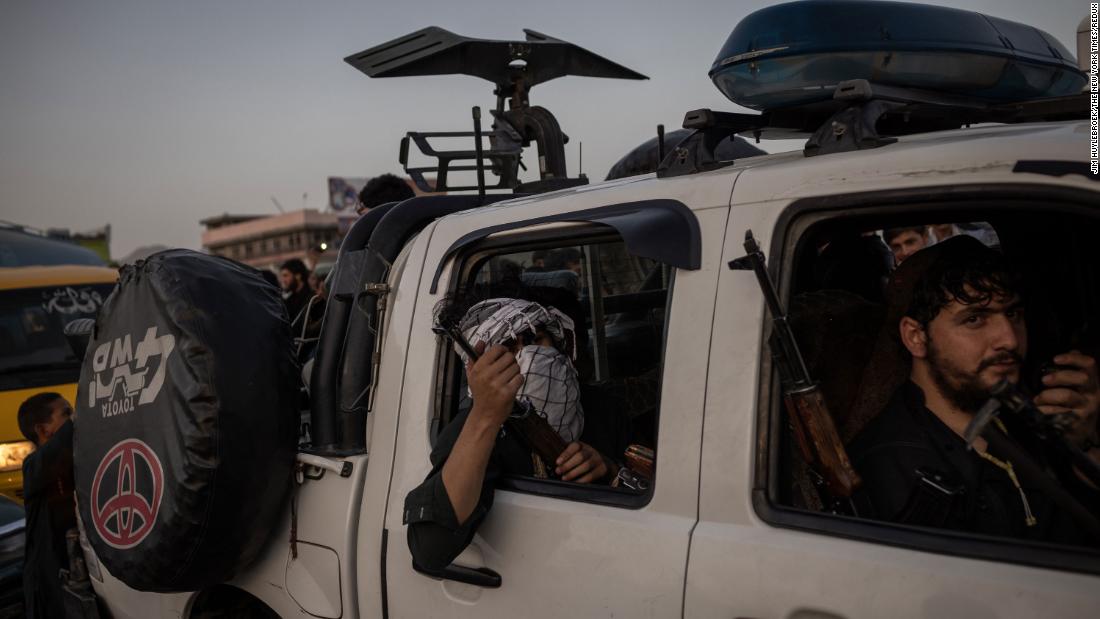 With futuristic speed, Afghanistan is being sent back in time, to what is often called a “dark age” of Taliban domination. The Afghan population is bearing witness with digital age tools, which means the heartache and terror is just a click away, filling cell phone screens and TV sets, if the world wants to see.

While there were relatively few sources of video as Kabul fell to the Taliban on Sunday, there were endless posts on social media:

— Former president Hamid Karzai also used FB to communicate with citizens. He posted a video message wishing for peace while standing with his daughters.

— Rumors of the Taliban’s presence in Kabul rocketed across social media platforms as journalists posted videos of the US helicopter evacuation effort. Other videos showed traffic jams along major arteries and emptied-out neighborhoods elsewhere.

— “Pro-Taliban social media accounts showed video clips of what they said were large numbers of insurgents arriving in pickup trucks to provide security for Kabul,” the WSJ’s Yaroslav Trofimov reported.
— Trofimov also shared one of the most up-close views of the evac from what appeared to be a military helicopter landing zone. He captioned it “The end.”
— Late-night videos from the airport, on Snapchat and other platforms, showed absolute chaos. In one video, people were seen climbing into a US Air Force transport plane. Afghan filmmaker Sahraa Karimi posted pictures from the tarmac.
— Amna Nawaz of PBS wrote about texting with sources in Kabul who “couldn’t get to the airport. They’re holed up in what they hope are safe spaces.”
— Beyond Kabul, “Afghan government officials were shown in video footage accepting a handover of power to their Taliban counterparts in several cities,” the NYT reported.

Former NYT and WSJ reporter Quentin Hardy, now the head of editorial for Google Cloud, called it a “sign of the times: Choppers on the roof, the president has fled — and the telecoms are fine. The besieged are interviewed on Internet calls, the insurgents post videos to social media.”

When I interviewed Megan Stack four days ago, she predicted this. She said we’d see a ton of “citizen journalism and decontextualized cell phone videos” as the Afghan government crumbled. Phones are the difference-maker since 2001, she said, when there were practically “no computers in Afghanistan.”

What remains to be seen: How, if at all, will the proliferation of smart phones and social platforms affect Afghanistan’s next chapter? Will the Taliban clamp down on this technology and stop Afghans from telling their own stories? Disturbing stories have already tricked out of some Taliban-controlled provinces. CNN’s Sam Kiley has a closer look at what “an Afghanistan under the Taliban look like” in this CNN.com analysis…

It all happened so fast

WaPo’s Dan Lamothe wrote: “On Monday, the Washington Post published a scoop that U.S. intelligence officials had revised their assessment of Afghanistan to say that Kabul could fall in 90 days. Some said it could fall in 30. That was six days ago.”

The Taliban’s seizure of Afghanistan was, many analysts said, shocking but not surprising. It was widely expected, but not so soon. Maybe this was a failure of imagination as well as a failure of American intelligence. When I sat down in the CNN anchor chair just before 11am ET, the international desk moved an URGENT that said “Taliban have entered Kabul.” So we began the hour with the news of the Afghan government’s collapse. We ended the hour with Kylie Atwood’s reporting that the US flag was down at the embassy. It all happened so fast…

That’s what Clarissa Ward told me during one of her live reports from Kabul on Sunday. She said Afghan journalists, particularly women, are “absolutely petrified” by the Taliban takeover. “They’ve been doing bold and incredible reporting for many years, and now there’s a very real fear that they might face retaliations for that or that certainly they won’t be able to do their work anymore.”

While we were speaking live on CNN, I was inundated with emails and tweets from viewers who were worried about Ward’s safety. So I asked her about that. She said CNN’s crews in Afghanistan are being “exceptionally cautious,” and will leave if necessary. But “for so many Afghans, that’s simply not an option,” she pointed out. “They’re here, they have to stay, they have to live with the consequences of this next chapter.” Alexis Benveniste has more here…
— CPJ’s Sonali Dhawan reports that the Taliban “invaded the homes of at least two female journalists in Kabul today. One managed to escape, one is unreachable.”
— In a memo to staffers, NYT publisher AG Sulzberger said “we are doing everything we can to try to get our staff, former staff and their families out of harm’s way as soon as humanly possible… Please keep our colleagues and their families in your thoughts and prayers.”

The Guardian has been publishing astonishing essays by Afghan contributors. This one is by a female resident of Kabul who now insists on anonymity for obvious reasons. On Sunday, she wrote, “all I could see around me were the fearful and scared faces of women and ugly faces of men who hate women, who do not like women to get educated, work and have freedom.”
The Fuller Project, the nonprofit newsroom covering women and injustice, also produced an agonizing thread full of reporting and reactions from Afghan journalists, many of whom spoke anonymously. Politico also published a story by a male Afghan journalist “who asked not to be identified to protect his safety…”

Newfound attention for the “forgotten war”

The US presence in Afghanistan has been a footnote for so long. Too long. Now it’s suddenly the top story. As CNN’s Nick Paton Walsh observed, “The kind of tragic, urgent attention Afghanistan is getting now is very clearly the result of the spectacular and exhausted inattention it got for about the last 9 years.”
I wonder if viewers and readers feel a sort of confused whiplash. Or if they feel anything at all. Kate Brannen of Just Security asked, is this “the first time in 20 years the American public is showing any interest in Afghanistan?”
I said on CNN that I perceived that the American people “accepted” this defeat, so to speak, years ago. I was most struck by what Ruben Gallego, an Iraq War vet and Democratic lawmaker, said on Twitter on Saturday. “What I am feeling and thinking about the situation in Afghanistan, I can never fit on Twitter,” he wrote. “But one thing that is definitely sticking out is that I haven’t gotten one constituent call about it and my district has a large Veteran population.”

The banner headline atop Monday’s edition of the US military’s proudly independent newspaper, the Stars and Stripes, says “IT’S OVER:”