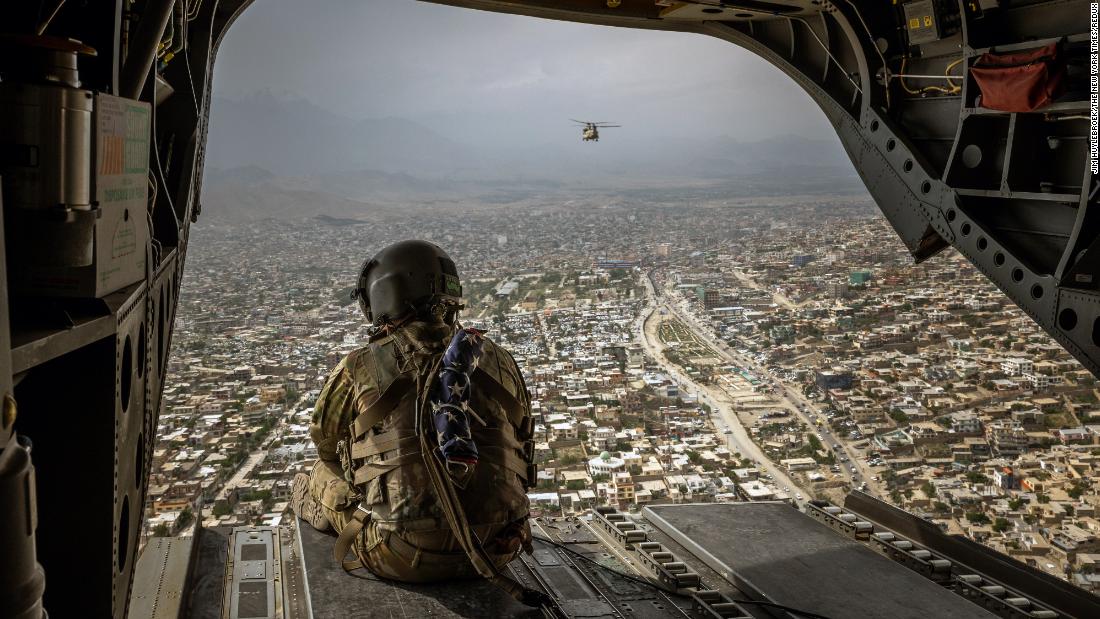 The concerns are not necessarily rooted in fears of a domestic political backlash. Multiple officials point out that the decision to bring US troops home remains overwhelmingly popular, with one official pointing to the sustained domestic apathy for the war. House Speaker Nancy Pelosi has requested an all members briefing on Afghanistan from the Biden administration during the week of August 23, when members return from recess, according to a Pelosi aide.

The White House also believes it has a scapegoat in former President Donald Trump.

Many officials have noted that the deal Trump made with the Taliban last year to withdraw all US and coalition forces from the country by May 1 forced Biden’s hand, leaving the new administration no choice but to pull out lest US forces get dragged into a major war with the militant group. The administration has assessed the Taliban’s military capacity is at its highest level since 2001 and there was full expectation they would launch a nationwide offensive regardless of whether the US stayed or went, multiple officials said. Increasing troop levels to counter that was never something Biden thought feasible.

Additionally, the withdrawal has not yet created a wedge between the US and its key international partners and US allies, while involved in flailing efforts to restart peace talks in earnest, haven’t made the US departure a central point of discussion with Biden recently or over the past several months, according to multiple US and European officials. Secretary of State Antony Blinken and Secretary of Defense Lloyd Austin have repeatedly made clear to US partners that Biden’s decision is final.

The subject was hardly raised in Biden’s private meetings with counterparts during his visit in June to Brussels for the NATO summit, something that stunned administration officials who were prepared to have to respond to frustration from European allies about Biden’s timeline for withdrawal.

“It would have been a waste of time,” one European official said. “We realized very quickly this wasn’t something that was negotiable for (Biden.)”

A European diplomatic source said the moves by the administration Thursday are another sign that Biden is intent on avoiding a “Saigon moment,” though they also acknowledged that the situation is escalating very quickly.

On Wednesday night, Biden convened a meeting of his senior national security team to address the Taliban’s rapid gains over the last several weeks. Biden was briefed on both the situation on the battlefield and the plan that had been drafted to draw down embassy personnel — and send in US forces to facilitate that effort.

On Thursday morning, national security adviser Jake Sullivan and Secretary of Defense Lloyd Austin briefed Biden on the full recommendation, which the President then signed off on. Blinken and Austin called Afghan President Ashraf Ghani and US officials consulted with allies and partners, including NATO Secretary General Jens Stoltenberg, about the plans throughout the day. The US officials in Doha, Qatar, negotiating with the Taliban will remain there.

The overall effort to evacuate the embassy personnel is already underway, though the precise number of personnel slated to leave has not been finalized. At this point it is only being described as a substantial number, leaving the embassy operating with a core diplomatic presence.

US officials have communicated directly to the Taliban that if American personnel are put at risk, the US will defend them. There is no firm timeline on how long the American troops will be on the ground, only that they will be there until the efforts are completed.

Officials took pains to attempt to explain a distinction between the drawdown and an evacuation, emphasizing that the embassy remains open and operational.

“We will continue to have a diplomatic presence on the ground to fulfill these important functions,” Ned Price, the State Department press secretary, told reporters.

But privately, administration officials are more candid about the direction things are likely headed. The US embassy presence will be evaluated in real time throughout the coming days and weeks, and the American military personnel on the ground have the capability to facilitate a full evacuation if it’s deemed a necessity.

It’s an outcome that was always considered possible, officials have made clear.

The prospect of significant Taliban gains, along with long-standing doubts about the capability of the Afghan National Security Forces, were always key elements of intelligence assessments. But the speed and scale of the Taliban offensive have stunned officials over the course of the last several weeks.

‘They’ve got to fight for themselves’

Questions are looming, though, over how history will judge Biden’s decision and what it will mean for Afghanistan’s most vulnerable populations — particularly women.

“If there is one thing supporters of an abrupt US withdrawal from Afghanistan had in common, it’s that they were almost entirely men,” said Karim Sadjadpour, a senior fellow at the Carnegie Endowment for International Peace. “Afghan and non-Afghan women understood the nature of the Taliban, and the consequences of a US withdrawal, much more viscerally.”

The White House still faces an uphill climb to prove it will be able to deliver on Biden’s promise to evacuate the Afghans who have aided US troops and personnel over the last 20 years.

Flights out of the country for those who haven’t fully completed the special immigrant visa process are underway, an effort tagged “Operation Allied Refuge” by the administration. A third country in the region is likely to serve as a location for many of those moving through the process in the coming weeks, though it’s unclear which country that will be.

But the US’ ability to reach the thousands of applicants spread through various corners of the country is limited even in the best of circumstances.

Those limitations, with more and more potential evacuees located in areas overtaken by the Taliban, grow by the day, an official acknowledged.

Democratic Rep. Tom Malinowski, who has been highly critical of Biden’s decision to withdraw, said the US should convey to the Taliban that if they try to take Kabul “then we will unleash everything we have on them” — and if they don’t comply, then the US should consider a “Dunkirk-like evacuation” of the city from the airport.

“If it is not possible to save Kabul, we are going to have a lot more than just a US embassy evacuation on our hands,” Malinowski said.

Many note, moreover, that the fact that Afghan forces have been so quickly overwhelmed after 20 years of training, US equipment and hundreds of billions in aid actually justifies for Biden’s decision to withdraw.

“What was another year going to do the prior 20 didn’t? What about another two years? Five years?” one US official said shortly before the drawdown decision was announced.

“They’ve got to fight for themselves, fight for their nation,” Biden told reporters this week, after making clear he had no regrets about his decision.

The European diplomatic source also said that the view of some allies remains that Biden’s withdrawal decision and subsequent doubling down is based largely on domestic political considerations rather than the ultimate fate of Afghanistan itself, leaving other countries on their own as far as taking steps related to security of their personnel and future presence in the country.

Further fueling Biden’s determination on the issue is the fact that he has wanted to put more resources toward competition with China, which his team sees as the overarching foreign policy challenge and long-term threat to the US. Reorienting towards that competition is front and center in every decision they make, the sources said.

But Sadjadpour said that could backfire.

“Withdrawing from Afghanistan was supposed to give Biden more attention to focus on China,” he said. “The reality is that the resulting civil war or Taliban takeover in Afghanistan is going to require far more of his attention than it did before.”

There are renewed concerns — given the Taliban gains — over how safe it was to bet that Afghanistan would not become a breeding ground for terrorists that could threaten the American homeland. That is one area where the domestic population both wants and needs reassurance, an official said.

Even as recent intelligence estimates show Kabul could fall within 30 to 90 days, the Biden administration has yet to finalize its policy for pursuing terrorists in Afghanistan once US troops have departed, according to two US officials familiar with the intelligence. At issue is the degree of White House involvement the military and CIA will need before they can conduct a lethal operation.

Both Republican and Democratic lawmakers on Capitol Hill and former officials say it will be increasingly difficult for the US to gather intelligence on and prevent potential threats to the US after the pullout is complete. As part of the withdrawal, the CIA will lose many, if not all, of the bases it has used in the past for its drone program.

The drawn-out uncertainty leaves the military and the CIA in limbo as they await updated guidance on what kind of approval they will need to launch lethal strikes after Biden officially declares the war to be over.

But for now, officials still perceive China as a greater threat than what could emanate out of Afghanistan.

Blinken made that clear in a speech this week, when he discussed the need to invest in infrastructure and innovation at home as a means to drive US competition with China — and did not mention Afghanistan once.