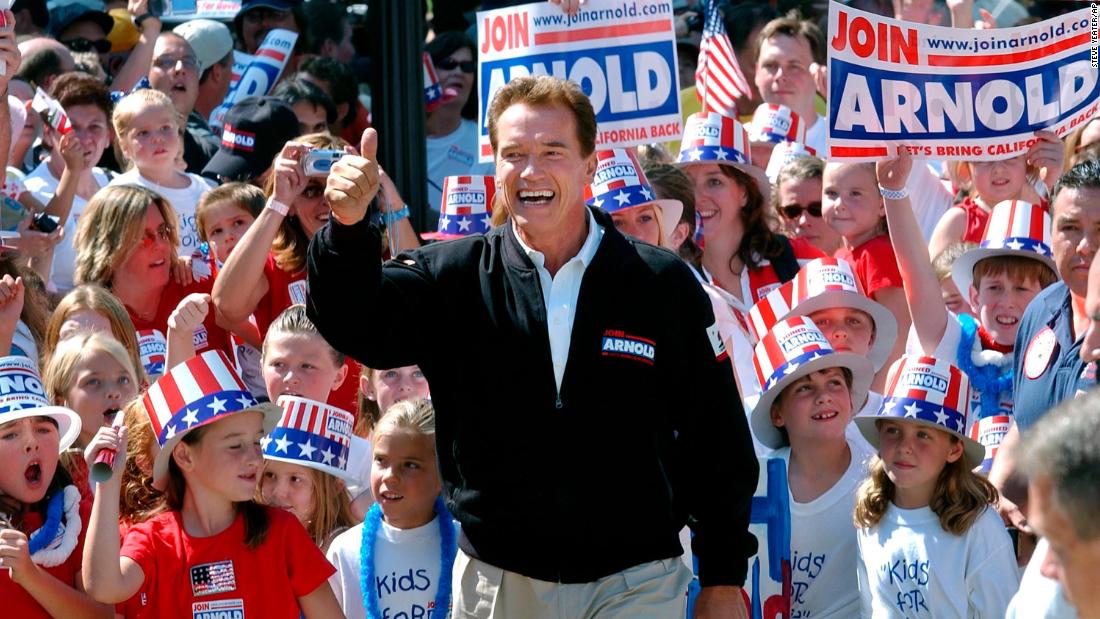 CNN checked in with California-based GOP strategist Rob Stutzman — who was part of the team that ushered Arnold Schwarzenegger into office in the 2003 recall — to get his take on the trajectory of this race and why this recall is so different than the one that unfolded 18 years ago. Our conversation has been lightly edited for length and clarity.

Q: Let’s talk about the state of play: in early August, the public polls tightened dramatically. Newsom appeared to be in trouble. Then, over the past few weeks, he has gained some breathing room as scrutiny has grown of Republican Larry Elder, a conservative talk radio host who has been leading the potential replacement candidates in the polls. What changed?

Stutzman: The emergence of Elder, not only as a candidate, but a clear frontrunner, gave Newsom what he desperately needed — and that was an opponent to run against. That’s allowed him and his campaign to shift the frame of this election away from a referendum on him to a more traditional “D” versus “R” choice for voters. And in California, that’s a 60-40 race for Democrats. It has been everything he has needed — Larry Elder — someone to create contrast and motivate his base voters to return ballots.

Q: How well is Newsom positioned to defend himself against this recall? How is his political standing different than that of former Democratic Gov. Gray Davis, who was the first and only California governor to be recalled in 2003?

Stutzman: Newsom does have real vulnerabilities — and there are real questions of likeability and competence. But he’s not nearly as unpopular as Gray Davis was, and there are not nearly as many Republican and centrist voters in the state as there were 18 years ago. Gray had just gotten reelected, but it was a much closer election than it should have been. Then came a budget deficit — and people were just done with him — and then you pile on the previous energy crisis.

RELATED: What it would take for Republicans to recall a Democratic governor in deep blue California

Q: Explain how the budget deficit and the energy crisis were affecting people’s daily lives, and shaping perceptions of Davis back then?

Stutzman: The inability to keep the lights on was affecting people’s lives. Many people were affected by these rolling blackouts, so it shakes your confidence in what’s supposed to be a first-world government. Then (Davis) gets reelected and there is a revelation about how deep the budget deficit is. There was a sense it had been concealed. … The governor then triggered a mechanism to raise everyone’s car registration in order to pay for the deficit. So he gets re-elected with no enthusiasm from the voters and then immediately raises their car tax — meaning everyone in California got taxed on the thing that is most precious to Californians. That really lit a fuse. To me, that’s a contrast with Newsom, who is not out there suggesting we raise taxes. In fact, the state is awash in money.

Q: Why has The French Laundry thing — one night, one incident — played such an outsized role in the recall conversation? (Newsom attended an early November dinner at the Napa Valley restaurant with about a dozen people, unmasked, at a time when he was urging Californians to avoid gatherings. He apologized after photos emerged.)

Stutzman: It’s one of those things where the worst thing that everyone thinks about politicians turns out to be true. …. While Californians are sacrificing and are in fear for their economic and health security, concerned about their school-aged children and trying to abide by these restrictions against gathering (as their public health officers and their governor were telling them they needed to do), it turned out that their already-perceived-to-be-rich-and-elite governor was in fact violating those same protocols at probably the most elite restaurant in the state. And he’s doing it with lobbyists. … It’s an easy anecdote for everyone to understand, which is why it became a big deal nationally. If he’s on a presidential debate stage in three years, someone on the left will be attacking him for it. It’s beyond any ideological frame, it just has to do with arrogance, hypocrisy and elitism.

Q: Who is Newsom’s base and who does he most need to turnout?

Stutzman: Newsom’s base is the Bay Area — white liberals in the Bay Area — and that’s where he will need a robust turnout. The good news for him is the Bay Area has proportionately turned out more effectively than Southern California for quite some time. He did well with Latino voters in 2018, but they plausibly present a real vulnerability for him, especially over the school opening issues and Covid restriction issues.

RELATED: Latino voters could be key to Gavin Newsom keeping his job

Q: A majority would have to vote to oust Newsom, but if that effort succeeds, his replacement could be selected by a plurality — potentially a small fraction of voters. Elder is the leading candidate to replace Newsom, yet he’s far more conservative than most California voters. With so much frustration about Covid restrictions, homelessness, housing costs and wildfires, why didn’t a more moderate candidate like former San Diego Mayor Kevin Faulconer ever take off?

Stutzman: I think in Faulconer’s case, the mistake they’ve made is they kept running him essentially in this Republican primary campaign. As soon as Larry Elder was in the field, you’re not going to win the plurality of the Republican vote. You need to expand to people that may be voting “no” on the recall — a lot of Democrats, independents — but who need a safe harbor to vote for, because there’s no mainstream Democrat (running to replace Newsom). Still to this day, no one’s really talking to those voters. The Faulconer campaign never really reoriented itself to say, “Hey, I’m a competent, well-credentialed centrist who believes some Republican things and believes California could use a dose of Republican leadership when it comes to homelessness and crime. But I’m not crazy.” They never really pivoted to that, and it’s left him in this terrible no-man’s land.

RELATED: The chance of Gov. Gavin Newsom getting recalled is declining in California

Q: California is obviously a very deep blue state that has been run by Democrats for a long time now. Is there anything to this notion that the recall could help with a potential Republican resurgence here?

Stutzman: In some respect, Republicans don’t have anything to lose, but there are a lot of voters who have felt very put out by the circumstances of Covid — whether it’s small business owners who were jerked around by broad and inexplicable swings in shutdown policies, or the millions of parents who have been adversely affected by what’s gone on in the public schools. I think it’s an opportunity for Republicans to be able to speak to those types of voters and possibly pull them into the fold. And it’s the first time in four years California Republicans have had an opportunity to talk about something without the clear shadow of Donald Trump lingering in the conversation.

Q: For people who didn’t live through Schwarzenegger’s rise in California, what was the lightning in a bottle that you guys had with his candidacy? What made him so appealing in the 2003 recall?

Stutzman: Real life action hero coming to government to do what he does on the screen — which is save the day.

Q: Does anyone in the Republican pack right now have the kind of advantages that Schwarzenegger had?

Stutzman: No, none of them do.